Derek Hunter
|
Posted: May 19, 2022 12:01 AM
Share   Tweet
The opinions expressed by columnists are their own and do not necessarily represent the views of Townhall.com. 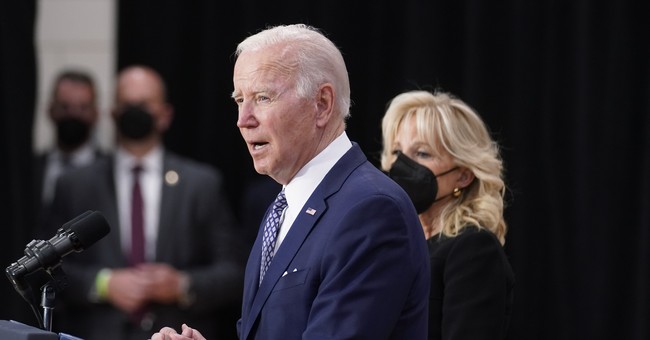 I really despise these people. That Democrats are desperate for anything to distract from their failures that they’re willing to lie, cheat and steal is nothing new, but the extent to which they’re taking it is simply vile. They are now blaming anyone who isn’t them for the murder of 10 people in Buffalo, essentially declaring half the country to be violent criminals. That’s evil, but still easier than defending Joe Biden’s record as President.

I don’t want to see those faces on TV and hate them. Chuck Schumer is ugly, sure, but he’s just a d-bag politician. Nancy Pelosi has had so much work done on her face that you almost pity her when you see her, if only for the energy she must exert to fully close her eyes. Biden was always dumb, but the more than sprinkling of dementia has amplified what God neglected to give him in the first place. They and their fellow travelers have always disgusted me, but now it’s beyond that. I simply can’t fathom how a decent human being could do the things they do.

Sure, anyone can slip and do or say something horrible, as humans we all fall short sometimes. But they live there; it’s all they do.

There is nothing about the current Democrat Party that isn’t predicated on lies, jealousy and hatred – all stirred up by them. I couldn’t imagine living life that way, but it really is a bunch of rich people lecturing others about how it’s wrong they don’t have what other rich people have. Those rich people then promise to make those other rich people suffer for their success. It’s truly bizarre.

Somehow, it works. Never underestimate the power of jealousy.

Democrats add in the idea that race is also something to be jealous over – that certain skin colors have it easy. They honestly believe that the kid of a white meth-addicted mother in Appalachia has “white privilege” and the child of Will Smith is oppressed because of things that happened 400 years ago.

OK, those in power don’t “honestly believe” that, they’ve used that power to convince their followers of that, however. They know better, but they also know the power of positions of authority and trust when it comes to “grooming” people to do whatever you want them to do. It’s rather sick.

Joe Biden went to Buffalo and not Waukesha or New York City. The last two attacks were perpetrated by black men who spewed Democrat Party talking points, though with more direct language than the politicians and pundits deliver them. The sentiment was unmistakable, so those attacks had to be swept under the rug.

Same for Laguna Woods out in California. That was a Chinese sympathizer of communism attacking a Taiwanese church. Biden didn’t rush to go out there because Democrats couldn’t use it. Yes, they’re that sick.

The President turned a chance to meet with families in Buffalo into his own personal Wellstone Rally, using a sad occasion when his handlers knew the media would be showing him to give a nakedly political speech, disgusting in its content and full of lies.

It was as gross as Barack Obama’s speech at a memorial for fivw police officers murdered by a Black Lives Matter member, remember that? That was back when Democrats insisted the killer was NOT a member of BLM, that he’d just attended a couple of meetings and events. That just so happened to be how one joined the group, as there were no membership cards or anything, but they decried guilt by association back then. Now, it’s all they have.

The left ignores the parts of the “manifesto” where the killer declares himself on their side, where he attacks Fox, etc. Instead, they focus on “replacement theory,” something they call racist now but proudly bragged about until Saturday afternoon. Once they could weaponize it, they pretended they hadn’t loved or created it. (Seriously, watch this montage to see exactly what I’m talking about.)

These people were all going to hell already for a lot of reasons, now it’s like they’re trying to upgrade their tickets on the express train there to first class.

The funny part is Biden himself admitted the Buffalo killer has mental problems and that we have “enough laws on the books” already to deal with these situations, but that was off teleprompter. His handlers put the exact opposite in his speech, and Ron Burgundy delivered.

The truly dangerous part of the left’s current path of demonizing half the country is someone is going to believe them and do something horrible. There are unstable people in the world and one of them might believe you’re going to start rounding them up. It has happened before when a Bernie Bro tried to kill Republicans. Democrats pretended to care for about 15 minutes, then returned to calling everyone who doesn’t support them Nazis. In a nation of 330 million, it’s bound to happen to them, sooner or later. I hope it doesn’t happen, but if and when it does, I will find it very difficult to give a single damn.