Donald Trump For Speaker Of The House

Derek Hunter
|
Posted: Jan 25, 2022 12:01 AM
Share   Tweet
The opinions expressed by columnists are their own and do not necessarily represent the views of Townhall.com. 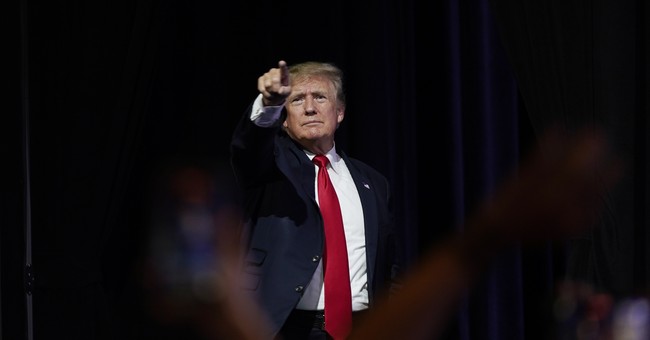 The Republican Party is on the cusp of a historic victory in November, provided they don’t give into what is far too often their instinct: self-destruction. No political party ever has been so adept at snatching defeat from the jaws of victory. Still, Republicans have all the advantages anyone could imagine – a wildly unpopular president of the other party serving as an anchor on every Democrat up for reelection, an agenda disconnected from the needs, wants, or desires of the general public, and an economy to make Jimmy Carter’s record look desirable. All they have to do is avoid all the usual infighting and general stupidity for which Washington is known. God help us.

One thing Republicans can count on is, should they manage to retake power, there will be a bunch of firing down their own trench. Circular firing squads are not unique to the GOP, but they have all but been perfected by it.

In 1994, after Republicans took the House for the first time in 40 years, there was no question as to who would be elected Speaker – Newt Gingrich. Since his petty ouster over the 1998 mid-terms, Republicans have been saddled with one disastrous Speaker after another. Bob Livingston was next but never got the gavel because of an affair he’d had. Dennis Hastert was next, worthless as Speaker and an embarrassment after. John Boehner cried his way into the gavel, and didn’t do much beyond smoking and drinking his way through his tenure. Then it was Paul Ryan, who looked at taking the job as a “favor” for the party.

All these GOP Speakers after Newt sucked in their own special way. So who is in line to take the job next? Kevin McCarthy? He’s the obvious choice, if you ask him. If you ask the Republican caucus, not so much.

McCarthy has not endeared himself to House Republicans, quite the opposite. The odds of him getting 218 votes seems unlikely. So who else is there?

One thing the Republican Party has going for it is there’s no lack of people who think they should be in charge. On the other hand, they have no one who can get 218 Members to support them for Speaker…except maybe one: Donald Trump.

It’s unclear as to whether or not Trump wants to be president again, but what is clear is he wants to be a player. Speaker of the House would make him the ultimate player. The Republican legislative agenda would move because of him. It’d die at 1600 Pennsylvania Ave., as long as Biden resides there, but Trump could get Biden and Democrats on record as being against a great many popular proposals.

More importantly, at least to Donald Trump, is as Speaker of the House he could direct investigations into the corruption of the Biden administration and family. Who wouldn’t enjoy a thorough accounting of the Biden family fortune? How did a family with no related education, background, or experience and a history of substance abuse end up making tens of millions of dollars when only one member, Joe, ever held a job for any length of time? Donald Trump would justifiably love bringing that information to light.

You’re probably thinking this is a crazy idea, but it’s really not. There is no requirement that the Speaker be a Member of the House, or even an elected official. There is no other Republican who would stand a chance of getting 218 Republican votes, which would mean it’d be the election of Paul Ryan all over again – someone so compromised and disinterested, who’d look at the Speakership as a favor they were doing for the country rather than the opportunity to do something remarkable for the country. Florida Congressman Matt Gaetz has been floating this idea for a while, going so far as to say he’s spoken to the former president about it.

Lastly, with the issue of Trump possibly running in 2024 still in the air, this would remove that. The incentive to foster a counterproductive feud between Trump and, say, Florida Governor Ron DeSantis goes away, or at least diminishes significantly.

The House of Representatives has never been a bastion of conservatism. Trump could hold them together, if only out of fear of his wrath, to pass actual conservative legislation. What happens in the Senate after that is a separate matter, but Trump’s oratory skills would be helpful in that regard too. And, in 2024, should a DeSantis or Abbott or Noem or any other Republican win the election, a Speaker Trump would be immeasurably helpful in passing that conservative agenda.

If Donald Trump wants to be in the action, and he sure seems to want to be in the action, the Speakership is the perfect outlet for that. Kingmaker and king at the same time without the hassle of disloyal staffers looking for future book and cable news deals and a deep state bureaucracy looking to stab him in the back. It’s not as crazy as it sounds.