Derek Hunter
|
Posted: Oct 12, 2021 12:01 AM
Share   Tweet
The opinions expressed by columnists are their own and do not necessarily represent the views of Townhall.com. 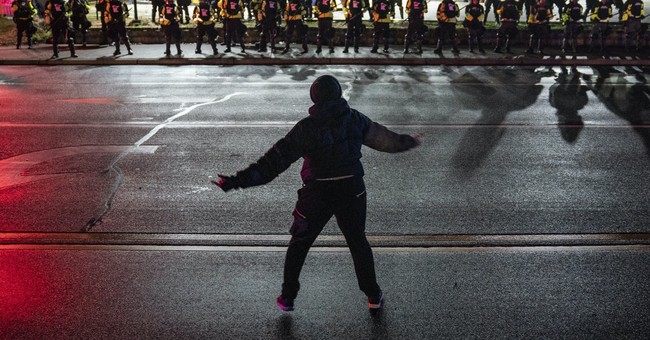 In the movie “The War of the Roses,” the fighting couple played by Michael Douglas and Kathleen Turner end up dying while fighting with each other through a divorce. As they both lay there dying after falling from a chandelier (no spoiler alert, there’s a good chance the movie is older than you are and if you haven’t seen it by now, that’s on you), the hand of Douglas is laying on Turner. Douglas is gone already, and Turner’s last act on this Earth is to flick his hand off of her in disgust that he was touching her. Romancing the Stone this movie is not. But it sure does seem like looking into the future, the near future, of what this country could become. Maybe we should call it a day before we reach that point?

Honestly, if the country split up, I wouldn’t miss anything the left brings to the table. We’re headed in that direction anyway, we might as well just do it. Better to have a planned break up than be blindsided and bathed in violence, right?

I firmly believe a “hot civil war” would easily be won by the right; few liberals own guns. Yes, Democrats lead the military, but would they really want to bank on troops firing on their friends and families?

It’s clear they don’t like us any more than we like them, so why stick around? The United States is geographically large, there’s no reason it needs to be. But how do we break it up? It can’t be a hopscotch to get across it, that would be asking for disaster. Sacrifices have to be made.

We lose the west coast. That doesn’t shock anyone. We don’t want it anyway. As beautiful as California can be, the cost of needle clean-up alone would double the debt. Oregon and Washington, meh, Dems already have them, they can keep them. Pretty much everything over to Texas is theirs, but from there it gets complicated.

We have to make the split somewhat equal, as far as land goes, so the new border will have to go north to the Texas panhandle, then east to about half way through Tennessee and Kentucky, north again through half of Indiana and Illinois. After that, west to Iowa, then straight across the northern Iowa border to Idaho. Split that up to Canada and call it done. We get Alaska, they can have Hawaii. Give everyone 5 years to move, with both governments agreeing to cover the cost or work out a property trade on each side. Done and done.

Why this line? We should have the history of this country, the monuments and graves of our Founding Fathers. They’d destroy them all. Sure, losing direct access to the Pacific Ocean will be a drag, but it’s not like we won’t be allowed to vacation there, or even move there, if you want to (for some weird reason). Liberals don’t produce anything, they assimilate things other people created. The take over companies, they don’t start them. They’ll need to buy our goods, they’ll need us to buy their entertainment products (be honest, “conservative” movies tend to suck). They’ll need our money.

We’ll happily take theirs too. If we split before things really go to hell, the split can be quite amicable. They’ll whine about leaving New York and DC, but they don’t really have to. They can stay, provided they understand and accept that we will be strictly adhering to the Constitution of the United States. Their sexual orientation and skin color will be irrelevant to how they are treated under the law and in society, and they are free to call themselves whatever they want, but no one else will be forced to. They’ll have to sink or swim based on their merit and work ethic, and there won’t be a social safety net that functions more like a hammock.

Same goes for the conservatives living out west – they can stay, if they want, the weather is nice – but they’ll have to live with an ever-changing dictionary, where words are redefined on a whim and created out of mental instability. Where gender is whatever someone makes up on the fly, abortion is free but speech isn’t. If that’s how you want to live, live it. I doubt most will.

It’d be better if we called it a day before we get to the point where we can’t stand each other. Frankly, I’m already there, but most aren’t…yet. If we wait too long, we’ll be like Oliver and Barbara Rose and our last act will be one of disgust that culminates with the destruction of all of us. It’ll be more fun to just watch the left destroy itself with their policies when they’re no longer able to force those policies on us.