Derek Hunter
|
Posted: Aug 15, 2021 12:01 AM
Share   Tweet
The opinions expressed by columnists are their own and do not necessarily represent the views of Townhall.com. 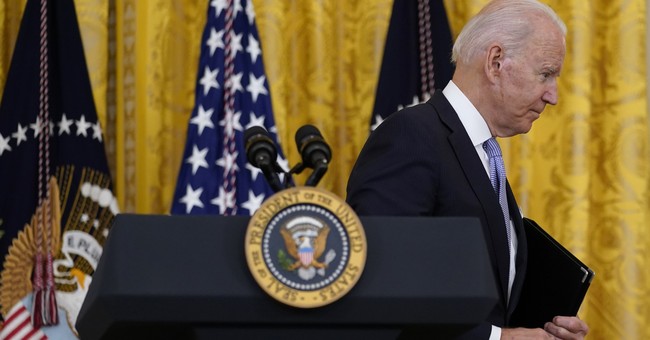 They sure talk a good game, don’t they? Be thankful Democrats don’t sell used cars, lest you have a yard full of lemons. No, they sell something worse than junk, they sell lies, and they do it really, really well. But don’t think for a second that they don’t know exactly what they’re doing, and never believe, not even for a moment, that they actually give a damn about what they claim to care deeply about.

They love children. How do I know this? They won’t shut up about them. Not their own kids, yours. Joe Biden doesn’t talk that often about Hunter because he’s a complete screw up junkie with a taste for expensive prostitutes and cocaine is nearly any form. But what you should do to raise your kids is something Joe has very strong opinions on.

“I know there are a lot of people out there trying to turn a public safety measure that is children wearing masks in school so they can be safe into a political dispute,” Biden said this week. “And this isn’t about politics, this is about keeping our children safe.”

Of course, it is all about politics. Biden then goes on to talk about people yelling at some doctors and nurses who advocated for child mask mandates in Tennessee. He went on to say, “These health care workers are heroes. They were the heroes when there was no vaccine…and they’re heroes again with the vaccine.” Yet the Biden administration, and every Democrat, are calling for the firing of those “heroes” who refuse to get vaccinated. Curious way to treat heroes, don’t you think?

All the posturing about women’s rights and the cries of “war on women” from the left was always a scam. It took a dozen women and a half dozen months for the left to care about the soon to be resigning pervert Governor of New York history of female exploitation. Politics is so important to the left that one of the leaders of Time’s Up, the Hollywood based appendage of the #MeToo movement, worked to discredit Andrew Cuomo’s accusers. She had to resign because that was akin to booking Harvey Weinstein to present Bill Cosby with the lifetime achievement award at the local rape crisis center. But progressives are progressives first, anything else a distant second.

Leftists don’t view people as individuals, they view them as opportunities. If they’ll advance their agenda, they’ll use them and throw them away the moment the outlive their usefulness.

Remember Cindy Sheehan? It’s likely been a while since you’ve thought of her because her usefulness to the left ended after the 2008 election. But up until that point she was fixture on cable news and the Sunday shows because she was a vocal critic of the George W. Bush administration. She blamed Bush for the death of her son in Iraq, and leftists adopted her as the face of the anti-war movement. They camped her on the road outside Bush’s property in Texas when he was there, and on the set of "Meet the Press" when the President was in DC.

Once Barack Obama won the election, Cindy Sheehan no longer had a purpose and she disappeared. More accurately, she was disappeared by the very media Democrats who’d helped create her.

The other people who helped create her were the anti-war movement, which also disappeared as soon as Obama was elected. Weird, right? They cared so deeply and were a constant presence on television, then poof…they were gone.

The only reason Cuomo had to resign was he was he stopped being useful and became a liability. Ted Kennedy, who had a career of way worse assaults on women, died a hero to the left because he never made the liability transition. Bill Clinton only lost his shine recently, when leftists tried to paint President Donald Trump as, well, what Bill Clinton has always been. Until he became a liability, he was hero. That he participated in a discussion on women in politics with Kamala Harris this year tells you how sincere the denouncing was.

Democrats are frauds; leftists will lose anything and anyone to get their way, nothing is sacred or out of bounds. The “concern” for children they’re expressing now will be exchanged for something else soon enough. Whatever that something else ends up being will be tossed aside once the next useful thing rolls around. Just as Cindy Sheehan, if you can find her.