‘Twas The Night Before Christmas

Derek Hunter
|
Posted: Dec 24, 2019 12:01 AM
Share   Tweet
The opinions expressed by columnists are their own and do not necessarily represent the views of Townhall.com. 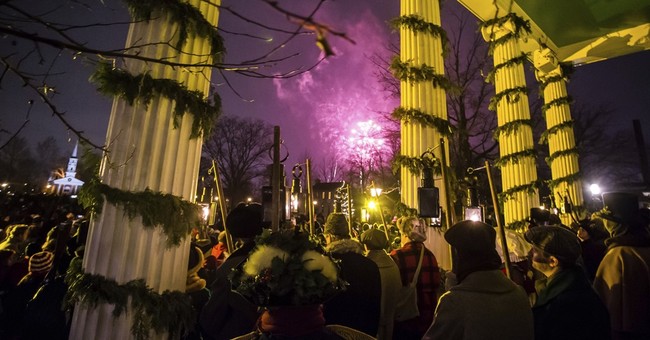 ‘Twas the night before Christmas, when all through the house, not a creature was stirring, not even the Democrats who swore to the nation that the President of the United States posed the greatest threat to our democracy the country has ever seen.

The liberals have nestled all snug in their beds, while visions of impeachment managers danced in their heads – which had plenty of room for both dinner and dancing, seeing as how they were uncluttered by brains.

And Nancy in ‘kerchief, an Chuck Schumer is his cap, had just settled on waiting for the Mueller Report.

When out on the Mall there arose such a clatter, Democrats sprang off their interns to see what was the matter – it was the liberal mob demanding impeachment.

Away to the window, they flew like a flash, afraid if they didn’t do what they promised, their liberal base would throw them out on their ass.

The moon on the breast of the new-fallen snow…until they realized it was just Robert Mueller, wandering aimlessly below…still mumbling to himself about something or other, no one was quite sure. The only certainty was report found no collusion, and the left’s hopes were dashed.

When what to their wondering eyes should appear, it was Alexander Vindman, an anonymous whistleblower, and a secret meeting with Adam Schiff’s staff.

More rapid than eagles Adam’s coursers they came, swearing this time they had Trump, and he called his team by name.

On top of the porch, to the top of the wall, we have a quid pro quo! The only problem was that the truthful answer was no.

The President released the transcript, complete and so fast, but they’d pushed in their chips, they just couldn’t pass.

So ahead they plowed anyway, swearing there was a crime. Why not hash out your 2020 campaign strategy on the taxpayer’s dime?

They stacked the deck with witnesses who all played their part, and oh did I mention that Eric Swalwell fart?

Secret hearings and well-chosen leaks, could not compensate for the fact that their case was so weak.

The polls never came around to their side, but when they ran out of witnesses they had nowhere left to hide.

With no direct evidence, they voted to impeach anyway. They’ll investigate in the Senate, the Speaker did say.

The cheers after the vote were quickly put down, with the wave of a hand and a scowl from the lead clown.

But not to the Senate, these charges would go. Because they’d be rightly dismissed, so they hang in limbo.

Impeachment incomplete, into chaos Democrats, were tossed. What’s the point in going forward when the battle is lost?

A 2-week vacation was already set, 14 more days of lies was a really safe bet.

But the public isn’t buying this liberal spin. In spite of Chuck Todd’s best efforts, it’s unlikely to win.

Brain Stelter did his part, making it his whole show, but no one watches the human potato.

MSNBC gave it their very best shot, but only the choir buys the case that they’ve got.

CNN preached earnestly to their largest crowd, but people trapped in airports can’t be convinced by a TV with no sound.

So we sit on the eve of Christmas with nothing to be had, from 3 years of investigations based solely on “Orange Man Bad.”

He must be guilty of something they proclaimed as they crowded their flights, back to their districts to explain why they fight.

But when they arrived they didn’t find a mob, because the economy was booming, everyone had a job.

It’s hard to get worked up over nothing when you have something better to do, and it’s now settling in that Democrats are screwed.

Impeachment as an election strategy wasn’t all that smart if only they’d thought of that from the start.

Yet this is where we are, on this Christmas Eve, because Democrats are pot-committed, conditioned to believe.

He must be corrupt, they proclaimed, as they ducked out of sight, to plot their next move, they’ll do anything except what is obviously right.

Merry Christmas, Democrats. Donald Trump is still the President. And Eric Swalwell, I know you’ve denied it, but you totally farted on Hardball, just admit it.