Things to Be Thankful For

Derek Hunter
|
Posted: Nov 28, 2019 12:01 AM
Share   Tweet
The opinions expressed by columnists are their own and do not necessarily represent the views of Townhall.com. 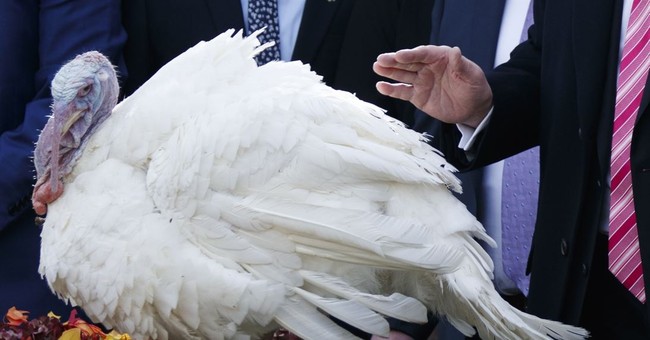 Happy Thanksgiving. Hopefully, you read this column before you enter your tryptophan coma, which I trust will claim many more victims than whatever eating too much tofu and disappointing your parents is called. And let me, as a native-born Detroiter, apologize in advance for the Lions. Growing up in the Motor City we learn quickly that we don’t have a professional football team, we only have the Lions.

With pleasantries and apologies out of the way, I want to take a moment to recount some of the things I’m thankful for this year.

First: family, friends, readers, listeners, and all those things we all list because we have to. We’re all thankful for each of them, but we rarely say it. We should. One day they won’t be here, or you won’t be here, and better you not leave them (or vice versa) guessing or regretting. Unambiguously telling them is easy, costs nothing, and will leave you feeling better than the meat-sweats you’ll all share after dinner.

Now that we’ve gotten that out of the way…

Next, in no particular order:

Adam Schiff. If conservatives had a box of parts and could construct an unlikeable, robotic, lying fraud of an arrogant, self-righteous d-bag to run impeachment, we wouldn’t have ended up with halfway to what Schiff is. If he wasn’t voted “most likely to require giving yourself a ‘Silkwood shower’ after meeting him” in high school, it’s only because he graduated before the movie came out. He secretes unpleasantness in a way Chet secreted whatever was shooting out of him in Weird Science. That Democrats thought he should be the face of impeachment is either a testament to how out of touch with people who don’t live on the coasts or to just gross the rest of their caucus is.

Nancy Pelosi. Once billed as a visionary leader, she’s now a feckless shell of a figurehead. She Joe Isuzuwithout the sincerity, a tax audit without the warmth. She sounds like she has a loose retainer in her mouth when she speaks, on the rare occasions she’s able to string together a coherent sentence. The leader who was forced to follow the radical fringe in order to maintain power is now having to harvest the fruit fertilized by the verbal droppings of freshman Members of Congress so blinded by historical ignorance they view Mao as a sell-out right-winger. If she didn’t deserve it, I’d feel bad for her.

AOC. Alexandria Ocasio-Cortez is a special blend of ignorance and arrogance that can only exist in politics, Hollywood, and college campuses. What she doesn’t know could just about fit into the Grand Canyon, yet she’s convinced she not only knows everything, but she understands it and knows how it should run. Her being amazed by a vegetable garden – it’s food that comes out of the dirt!– suggest Velcro shoes are too complicated for her to understand. When not calling everything racist and nailing herself to a cross on the altar of victimhood, she relaxes by minimizing the Holocaust with her anti-Semitic friends. If the US Treasury had a dollar for every time she said the word “like” in a sentence, we could pay off the national debt, afford her insane “green new deal,” and still have enough money to buy everyone a house. She’s the best thing to happen to Republican fundraising in decades, and her habit of firing down her own trench is likely to help electorally too. The most she speaks, the better things get for Republicans. The odds of here doing a Thanksgiving chat on Instagram how people are feasting to celebrate genocide are about 72 percent. I look forward to watching it.

Joe Biden. I feel bad including the former Vice President on this list. Not that he’s there, but for the reason, he’s there. He’s losing it. Joe hasn’t really been “all there” since his aneurysms so that he says dumb or goofy things and simply makes things up or uncomfortably smell a young girl’s hair is nothing new. But his endless string of gaffes in this campaign, coupled with the confusion and switching topics in the middle of answers and just getting verbally lost is. Whether it’s dementia or age doesn’t really matter, it’s real and we all see it. I’m not thankful for that, I’m thankful for the fact that despite all of these obvious signs of serious problems, he’s still leading Democrats for the nomination. It’s still a little early, but he's leading the pack consistently is an indication that even Democrats would rather have crazy through no fault of his own than crazy by choice. You’ve got to take your victories where you find them, no matter how small.

An honorable mention goes to Congressman Eric Swalwell, not only for the fart heard around the world but for giving everyone a laugh by running for president. Thanks, Eric, and feel free to let loose today. You’re with family.

We all have a lot to be thankful for this year, but nothing more than the fact that we are blessed with some of the best, or worst, political opponents imaginable, depending on how you choose to look at it. So be happy, sip a few adult beverages, tell those close to you that you love them, be ready to fight, and enjoy the ride because the next year is going to be crazy. Oh, and sorry again about the Lions.