Derek Hunter
|
Posted: Sep 09, 2018 12:01 AM
Share   Tweet
The opinions expressed by columnists are their own and do not necessarily represent the views of Townhall.com. 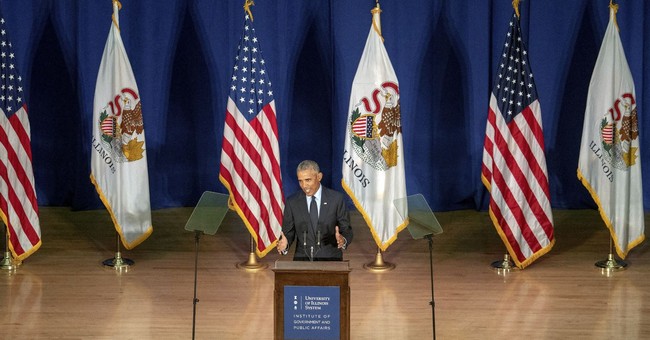 Welcome back to the political arena. I caught your speech Friday, you can still read a teleprompter like nobody’s business. Your attacks on Republicans were red meat for your base, which was your goal. Thankfully, they are hungry because President Trump stands on the verge of getting a second Supreme Court justice confirmed. (Do you wake up in the middle of the night screaming, “Merrick Garland!” like so many of your fans do? I kind of hope so.)

And I don’t begrudge your breaking with tradition of former Presidents not criticizing their successors. You spent 8 years in office whining about your predecessor, why should we expect anything different in the other end of those 8 years of awful?

I do, however, have a couple of bones to pick with your speech. It shouldn’t be surprising, you were a horrible president, so when you feed your obviously hungry ego people are bound to take issue with it.

You keep trying to claim credit for the economy. This is clearly a sore spot with you, and I understand why. The economy under your administration was sluggish, awful, really. So much so that your sycophantic media minions tried to convince the public that 2 percent growth was “the new normal” in an attempt to make your failure look like a success, like the best we could expect going forward. And they did a good job of it.

There are people who couldn’t find work under your administration who are now working. We both know you didn’t have anything to do with it, but you’ve got to sleep, right? Your legacy can’t just be flowery speeches, stagnation, and a Middle East in disarray. I mean, it is, but you can’t say that. You’ve got a library/monument to yourself to build, and you don’t want a Libya wing.

So you have to belittle the guy who brought about some of the lowest unemployment in generations, lowest black and Hispanic unemployment ever, and spurred economic growth that makes your two terms look like a soiled diaper. I don’t blame you.

Your line about how the economic recovery started under your administration was cute, and it played well with the drooling audience. You knew you were safe in saying that because journalists, who just can’t quit you, weren’t going to report how while the growth rate in 2015 was 2.9 percent (so close to 3 percent, but you just couldn’t get there, could you?), the rate the following year lost nearly 50 percent of that, a pathetic 1.6 percent. When you know the downward trajectory you’d created wasn’t going to be reported, you can say things like you did.

Again, I don’t blame you. I’d be embarrassed of your economic record too.

I do, however, take issue with you claims of Republicans being responsible for the division in the country. Like when you said President Trump was “just capitalizing on resentments that politicians have been fanning for years,” you were implying complicity for yourself, right? Aside from the fact that people will always disagree about politics, I seem to recall your administration and media cronies declaring everyone who dared hold a contrary opinion from you to be a racist, in one form or another. And I don’t remember you saying much about it. Considering you claimed to have learned about the scandals in your administration from the media, I’d assume you would have noticed those stories too. Unless you were lying. But you wouldn’t do that, right?

I get that you don’t like the current President, he’s doing a better job than you did, particularly for the people you claimed to care about most. The middle class is doing so much better without you, that’s got to suck. But to accuse Trump of what you’re guilty of is, sort of, breaking with norms, isn’t it? I thought leftists hated that?

That’s not to say President Trump isn’t breaking norms as well, he really is. The difference is he’s never portrayed himself as above it all. Nor has he spent an inordinate amount of time whining about the mess you left him, he just set about correcting it.

Petty is the word I’d use to describe your speech. It’s also an excellent descriptor of your whole administration, so feel free to ding me of unoriginality or lack of a thesaurus. Doesn’t make it any less true.

You can’t get over the fact that things, while certainly hectic from a news standpoint, are significantly better now that you’re gone.

Some of the damage you did can’t be undone. We’ll never get back those pallets of cash you gave to Iran. That money is likely already spread out, untraceable, funding terror around the world; which is why they wanted cash. Electronic transfers can be traced, dollars and euros can’t. But you knew that, of course. No one who comes up through the Chicago political machine is unaware of the power of cash.

And now you’re back, unable to retire gracefully. You’re young, for a former President, so it makes sense. Lord knows you have enough money, liberals seem to leave government for huge piles of it. The only things for which you are left yearning are attention and praise.

And don’t even get me started on your claims about how President Trump treats the press. You spied on them, tried to jail them, and named them as “co-conspirators.” Trump has tweeted and said mean things. Still, because of ideology and ideology only, they loved you and hate him.

I, for one, am glad you’re back. While you won your elections, you were like throwing a bag of sand to drowning man for everyone else down that ballot you supported. Please, feed that ego beast and campaign often.

Your promises still ring hallow with a lot of people. There are 5 million Americans who lost their health insurance because of you, millions more who remember how you used the IRS as a weapon, sold guns to Mexican drug cartels, wasted billions of tax dollars on that “stimulus” bill that enriched your cronies, left 4 Americans to die and blamed it on an Internet video to protect your reelection bid, to just name a few. Seeing your face, hearing your voice as you pound your own chest and make even more promises on behalf of others will only remind everyone of those things and more. So please, campaign.

Welcome back, Mr. President. The media and crowds will fawn all over you, as they always have, but what resides in your wake hasn’t changed.

PS: If you’d like to know how liberals manipulate the American people in ways you likely haven’t realized, pick up a copy of my book, “Outrage, INC: How the Liberal Mob Ruined Science, Journalism, and Hollywood.” It explains the why and how of what the left does in order to keep people feeling (usually anger and fear) to prevent them from thinking and acting rationally, and it does so with a lot of humor. Don’t take my word for it, take the words of Mark Levin, Ann Coulter, David Limbaugh, Dana Loesch, Dan Bongino, Michelle Malkin, Ben Shapiro, Kurt Schlichter, and countless others. Obviously, I have an interest in selling you a copy of the book, but they don’t. Yet they’ve all endorsed it. And, for reasons I don’t understand but am eternally grateful for, people are still buying it. You will love it, learn from it, and laugh throughout it, trust me. Thanks!