Double Standards Are The Only Standards Liberals Have

Derek Hunter
|
Posted: Aug 05, 2018 12:01 AM
Share   Tweet
The opinions expressed by columnists are their own and do not necessarily represent the views of Townhall.com. 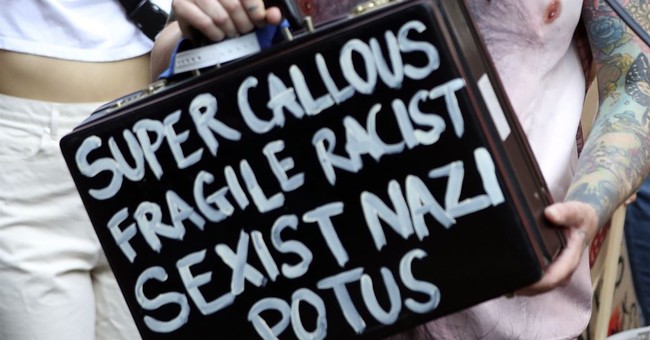 Progressive activists with press credentials across the country rushed to defend Sarah Jeong, the newest leftists to join the New York Times editorial board, when it was discovered that she had a years-long history of tweeting racist comments about white people. (Check them out for yourself, there are dozens, if not hundreds of disgusting, hate-filled thoughts from the newest member of the gang that sets the tone for the “paper of record” that have to be seen to be believed.)

The basic argument from the left is Jeong can’t be a racist because she’s a woman and a minority. Of course, if she had said any of the things she tweeted about blacks or Hispanics and not white people, she’d be condemned because on the progressive sliding scale of victimhood, Asians rate lower than those groups.

This stupidity is called “intersectionality,” which is essentially how the left sets up a hierarchy of victimhood. It sets up an order of who can be victimized and who can’t in any given situation. Straight white men are at the top (or bottom) of the scale and since we’re the worst, you can pretty much do or say anything about or to us.

The whole ridiculous concept, which is basically a way for leftists to absolve themselves of their hatred, is explained and mocked in my book, and is too long to go into here. Just know that leftists advocate that it is impossible to be racist toward white people. It’s dismissed by calling it “reverse racism,” which itself is a stupid term. Racism is racism, a “reverse racist” would be someone who isn’t a racist. But such is the state of the political left – they create terms, bastardize others, and never, ever let anything stand in the way of their ultimate goal of obtaining power.

That would fine, disturbing but fine, if it were some activist group dismissing Jeong’s racism, but it was the New York Times and a bunch of fellow travelers in journalism at other outlets. They all played priest and absolved Jeong of her hate, an absolution she did not seek herself.

In addition to her racism, Jeong also hates police officers, tweeting f-the police and cheering for their murder and more, regardless of race because, to the left, blue trumps everything else.

Jeong is hate wrapped in a Harvard Law degree and a victim mentality protected by progressives because she’s on their team. And rally to her they did.

If you’re on their team there is almost nothing you can do to fully fall out of leftists’ favor, as evidenced by the rehabilitation of Al Franken and the desire he run for office again. “He may be a grabby, gropey pervert, but he votes right,” the thought process goes. It can’t be long before Harvey Weinstein is producing movies and hosting Democratic Party fundraisers from prison, #MeToo be damned when there is an agenda to impose.

The New York Times doesn’t care that they’ve hired a racist who hates police and wishes them death. Democrats have burned more calories trying to distance their radical base from the murder of police officers by its members than they have condemning those murders, what’s a little racism for the cause?

For that, they must be held in contempt, or at least to account.

Sarah Jeong isn’t problem, standards themselves are not even the problem, double standards are. As I describe in my book, as was on full display this week, were it not for double standards, liberals would have no standards at all. As uncomfortable as it may be for conservatives, who view people as individuals responsible for their own actions, the time has come to apply the same rules to the left they apply to everyone else. If we don’t, or if we won’t, we might as well surrender now.

PS: Once again, I want to ask you to consider ordering a copy of my book, “Outrage, INC: How the Liberal Mob Ruined Science, Journalism, and Hollywood.” It explains the why and how of what the left does in ways that haven’t been before, and it does so with a lot of humor. Don’t take my word for it, take the words of Mark Levin, Ann Coulter, David Limbaugh, Dana Loesch, Dan Bongino, Michelle Malkin, Ben Shapiro, Kurt Schlichter, and countless others. Obviously, I have an interest in selling you the book, but they don’t. Yet they did. You’ll love it, trust me. Thanks.