Liberals See Only Opportunity in the Murders in Florida

Derek Hunter
|
Posted: Feb 25, 2018 12:01 AM
Share   Tweet
The opinions expressed by columnists are their own and do not necessarily represent the views of Townhall.com. 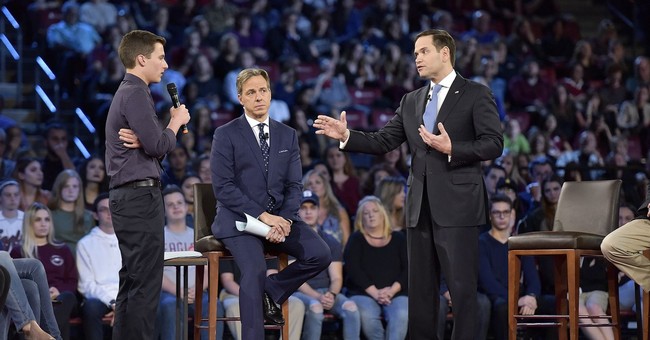 The horrific shooting at Marjory Stoneman Douglas High School in Parkland, Florida, will not be the watershed moment of the murder of 17 innocent people that liberals hope it will be. While it may lead to changes in some laws, liberals will not get the American people to cede to government their right of self-defense, especially since the tragedy occurred after a string of failures by all levels of government to act on existing laws that might have prevented it from happening. But it is yet another straw on the back of the camel already overloaded with the angry divisions and hatred the political left has been piling up that leads down the road where bad things are likely to happen.

Liberals and conservatives have always wanted different things, with conservatives more in line with the founding principles of the country and liberals having an affinity for European socialism and totalitarianism. But for years, it was a tug of war neither side was really winning – we lived in an odd middle ground where the rope moved only a matter of inches in either direction because both sides were constrained, to one degree or another, by precedent and the plain language of the Constitution.

That day is done.

On economics, conservatives tend to do well. The recent tax cuts and their growing popularity, coupled with the economic growth following them and the removal of unnecessary and expensive regulations are undeniable to all but the extreme elements on the left (Democrats and the media). But on matters of liberty, the rope is being pulled dramatically in the other direction.

Democrats are horrible at economics, but they excel at exploitation of fear. That CNN town hall on guns was a Nuremburg rally against the Second Amendment and the concept of individual liberty in the name of fear. It didn’t win any converts – liberals always play to their extreme wing because they need them to show up to vote – but it did expose the extent to which they are willing to go in order to get their way.

The town hall, and countless other media outlets, have featured kids from the school blaming the National Rifle Association and Republicans for the murder of their classmates. They’ve allowed this assertion to be repeated, unchallenged, every time it has been made.

I get it, no one wants to tell a traumatized kid that they’re wrong in their time of grief. But someone has to do it.

There has been more condemnation of the NRA and the GOP on TV in the past week over something no rational person honestly thinks they had any connection to than there has been blame directed to the man who did the actual murdering. And much of it has been by adults, journalists and pundits, who know better.

The gun didn’t cause Nikolas Cruz to murder, and neither did the NRA or the GOP. He was a member of neither. So why blame them?

The gun, or any gun, is a paperweight unless it’s used by a sentient human being.

David Hogg, the student turned into a celebrity by CNN in the shooting’s aftermath, tweeted “the NRA continues to promote lax gun laws that continue to kill children,” on Friday. He’s made similar claims on CNN that went uncorrected. Again, I expect this level of ignorance from school children, but I expect more from the adults around them. His Twitter feed reads like the Democratic National Committee or some other gun control group is writing it (which they may well be doing). Yet, unsurprisingly, no one in the media has corrected or challenged him.

Adults are supposed to correct children, it’s how they learn. If Hogg thinks laws, lax or otherwise, are responsible for the murder of children, we should repeal all laws right now. Of course, they are not; the individuals who commit the acts are. But you’d be hard-pressed to find anyone, child or adult, on cable news making that point. They’re advocating collective guilt and a collectivist answer, and people like Hogg haven’t bothered to condemn the actual killer, just Americans who had nothing to do with him.

Why must people who’ve done nothing wrong have to pay a price for the actions of someone else? When Van Jones equates the NRA with the KKK, how can you have a discussion premised on that? When Dana Loesch is called a “murderer” by an angry mob on CNN, how do you compromise with that?

You can’t, and you shouldn’t.

The Sheriff of Broward County, Scott Israel, sat on CNN and accused the NRA of responsibility for the massacre while he knew not one of his officers was on-site during the shooting, but four of them, heard the shots, and did nothing. They stood around for minutes as the slaughter unfolded and people bled to death. Israel knew it, he knew how many warnings his office had gotten and not acted on, he knew and still blamed innocent people to cover his own leadership failures.

How can you have a constructive conversation with someone like that?

Just like negotiating with a terrorist who wants you dead, you can’t and shouldn’t try. (What are you going to do, offer to be partially dead? Offer a limb or two? There is no middle ground with an extremist.)

As long as Democrats want to play the blame game to score political points, Republicans should act as though they don’t exist. Propose something on mental health that actually could make a difference and allowing, if the schools so choose, armed security to protect students and dare Democrats to vote against it. They either get on board and something positive happens or you beat them about the head with their refusal to protect children in the upcoming election.

If Democrats want to play the blame game, let’s play it. Broward is a Democratic county, Hillary Clinton won 66 percent of the vote in 2016 and Sheriff Israel, who is elected and is a Democrat, took 77 percent. Why did a Democrat sheriff ignore the warnings and blame others? Why did he lie on national television, only waiting until after to tell the public what his officers had done (or, more accurately, failed to do)?

Now the anti-gun gestapo are leading a boycott of companies with any association with the NRA. Those that cave should never get another dollar from any fair-minded American.

Democrats don’t handle being held to their own standards well. Partially because there is no good excuse for their failures, but mostly because they so rarely are. Journalists sure haven’t done it, so it’s up to Republicans.