Derek Hunter
|
Posted: Sep 04, 2016 12:01 AM
Share   Tweet
The opinions expressed by columnists are their own and do not necessarily represent the views of Townhall.com. 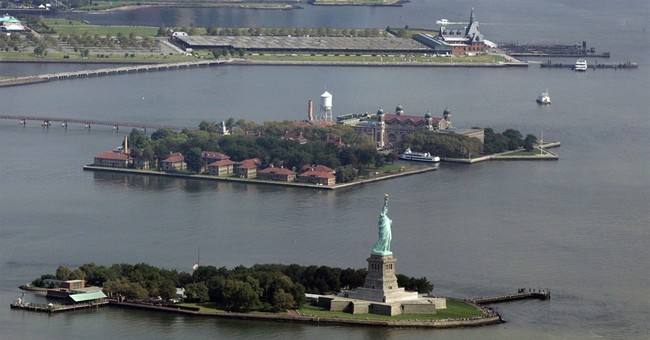 What a novel concept that a country would decide who gets to enter it and who doesn’t.

Actually, it’s not novel at all. In fact, it was the standard for most of American history. But in 2016, progressives absolutely have lost their minds over the prospect of ensuring those who seek to come to the United States actually add something to it.

Whatever you think of Donald Trump, he did, after a half-hour or so of standard campaign boilerplate, give specifics on his immigration plans in his speech Wednesday night in Phoenix.

1 Build a wall along the southern border.

6 Suspend issuing visas to people from any country where adequate screening cannot occur.

7 Ensure other countries take their people back when we order them deported.

9 Turn off the jobs and benefits magnet.

10 Reform legal immigration to serve the best interests of America and its workers.

Honestly, there’s nothing there a rational person would find objectionable. But Democrats aren’t rational people.

Actually, most of what Trump laid out is current U.S. law, or close. It’s simply not being enforced because Democrats don’t like it. Wonder how they’d feel if a Republican president declared no one would be imprisoned for not paying taxes because it would take parents from their children “through no fault of their own.” But our national sovereignty? Meh.

Liberals’ responses to Trump’s speech show they’ve lost the remaining solids in the vacuum between their ears. I collected some of the most unhinged reactions here.

Some are funny. Most are clinically insane and expose their hatred of America. Everything from Nazi comparisons to uncontrollable shaking to actually attacking “angel moms” – parents who had children killed by illegal aliens – their animosity knows no bounds.

The part that bothered progressives most was the concept of screening immigrants to make sure they are an addition, not a drag, on society. “It is our right as a sovereign nation to choose immigrants that we think are the likeliest to thrive and flourish here,” Trump said.

How does anyone who loves this country have a problem with that? The answer, of course, is they don’t. But progressives do.

Democrats would have you believe the great migration at the start of the 20th century was a free-for-all with wide-open doors flooded with anyone and everyone who wanted to come here. That simply isn’t true.

Ellis Island was not a turnstile; it was a weigh station. Immigrants seeking the American Dream had to prove they would add value to the country, not be a drag on it. They needed a sponsor and were checked for diseases. If they didn’t pass the standards set at the time, they were denied entry and sent back. That’s a stark difference from today.

Democrats welcome, and even encourage, anyone to simply cross the border or overstay a visa without consequence. They seek to take the extra step in conferring citizenship on them, which actually negates the need for either a border or visas. Without those a country is simply a landmass.

This is, of course, all about votes. Were Democrats compassionate they’d be concerned with the Americans losing out on jobs or having their identities stolen by the illegal aliens, as have 1.1 million Americans in the past few years whom the IRS couldn’t be bothered to notify. Such compassion…

The only thing missing from Trump’s proposal is the imposition of massive fines on employers who hire illegals. Cut them off from work, cut them off from benefits designed for Americans, problem nearly solved.

On the most controversial component of the immigration issue Trump remained mostly silent. He still says there will be no amnesty, but he’s not going to commit the mass deportations he’s discussed in the past.

Trump said he, or more likely a future president, would resolve the question of what to do with the millions of illegal aliens here already.  “That discussion,” he said, “can only take place in an atmosphere in which illegal immigration is a memory of the past, allowing us to weigh the different options available based on the new circumstances at the time.”

No matter where you fall on the issue, nothing Trump said was either crazy and extreme or squishy and insignificant. On one of the signature issues of his campaign, Trump played it relatively safe. And a rational Trump, even in just one speech, is what terrifies the left more than anything. The idea of enforcing U.S. law, of placing what’s best for Americans ahead of immediate political gains, is what drives liberals crazy.

Trump’s speech may not have broken much new ground, but it did peel back the curtain, just a bit, of what Democrats have become. It did force them to expose themselves a little further. That may be more valuable to his campaign in the long run.

Schumer and Pelosi's Failures Are Finally Catching Up With Them
Townhall
CDC director says definition of 'fully vaccinated' is being changed
Twitchy
The CDC Officially Moves the Goalposts on COVID-19 Vaccination
Redstate
Can Anyone Explain Why Biden Keeps Doing This?
PJ Media