Someone’s Gonna Have Some Splainin’ To Do

Derek Hunter
|
Posted: Aug 14, 2016 12:01 AM
Share   Tweet
The opinions expressed by columnists are their own and do not necessarily represent the views of Townhall.com. 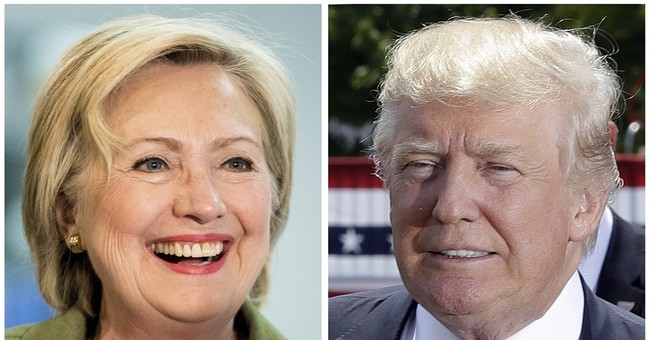 Polls aside, no one knows what’s going to happen on Nov. 8. As much as journalists, writers and pundits pontificate, if any of them – myself included – could see the future, we’d be lottery winners sitting on a beach somewhere.

Since we’re not playing the lottery, we have to make a best guess. Whatever happens, whoever wins, there will be a group of people who will have a lot of explaining to do.

Every election has cheerleaders; both teams have fans. Some fans do and say stupid or crazy things, but rarely do the candidates. This year is different.

This year, one candidate says whatever he wants, whether he means it or not, and isn’t afraid to say the exact opposite or “psyche” and move on. The other does whatever she wants, legal or not, then lies about it while standing on a pile of evidence to the contrary.

These two characters securing the nominations of their parties have thrown not only thrown the future of the country into turmoil, but their real and perspective supporters as well.

How can someone defend Hillary Clinton’s claims of having always been truthful about her secret, private email server when it’s unambiguously false? How can someone recover from spending 24 hours defending Donald Trump’s statement that President Obama and Hillary “founded ISIS” when the next day he kneecapped them by claiming he was only being sarcastic?

Whatever happens, whoever wins, there will be a group of ardent defenders who will be in desperate need of a reputation rehab.

If another shoe drops – and Hillary Clinton is Imelda Marcos when it comes to shoes available for dropping – Hillary could take down the Democratic Party and a large chunk of the media with her. Credibility, as shaky as it already is, would be gone for nearly every journalist working today. They’ve gone out so far on so many limbs for her they haven’t bothered to notice it’s a Bonsai tree.

As for Trump’s supporters, the fate isn’t any better.

Since before he secured the nomination, Trump’s devotees in the media – both surrogates and hosts – have assured the public he would change and he could win. Of late, they’ve taken to ignoring evidence to the contrary – arguing polls are skewed or seizing on Trump’s attributes that poll higher than Clinton but pretending the only poll question that matters, who you’re likely to vote for, doesn’t exist.

One national host, Sean Hannity, has used his TV and radio platforms to argue Donald’s social media follower count and the number of primary votes he received are an indicator for the general election. They aren’t. Sure, Trump got nearly 14 million votes, which is more than any Republican in primary history but less than a fifth of what will be needed come November.

Additionally, Hannity has begun personally attacking anyone on the right not fully onboard the “Trump Train.” Calling them “crybabies,” “disgusting,” and “dangerous,” Sean clearly has never read “How To Win Friends And Influence People.” Nor has he, seemingly, ever run a campaign, because you don’t waste time on voters you’ll never win, and tossing grenades down your own trench turns off the uncommitted.

His “preaching to the choir” act may be good for ratings – they’ll always come back to hear more gospel – but it doesn’t grow the flock.

And that’s what neither of these candidates appear capable of doing – growing their support. They gain by attrition of the other, by default. This race might as well be decided by a coin toss, given the shallow passions for either candidate.

When the votes are counted and the results known, there will be a necessary reckoning for the losing side. If it’s Clinton, the gravy train of those in her orbit will lose many cars and journalists will see their influence continue to wane, perhaps forever.

If it’s Trump who loses, cable news will quickly cast off the sub-par surrogates they’ve scrambled to sign to provide “balance.” Hosts, on the other hand, will have their audience awakened to the fact they’ve been fed half-truths and a false narrative; they’ve had a disservice done to them by people they trusted. They’ve had the left-wing media spin replaced by a swirl just as nefarious simply churning in the opposite direction.

No matter what happens, come Nov. 9, a lot of people will have a lot of explaining to do.