What Happened To Integrity?

Derek Hunter
|
Posted: Jul 07, 2016 12:01 AM
Share   Tweet
The opinions expressed by columnists are their own and do not necessarily represent the views of Townhall.com. 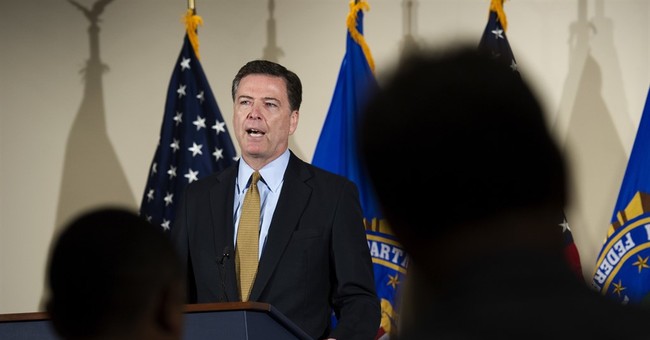 When government officials assume office, we hear a lot about their “great integrity” and “high character.”

Maybe the beltway press is working from a different dictionary, but in my 15 years in Washington, I've yet to see it.

When was the last time a high-ranking government official resigned in protest or disgust? That's not a rhetorical question.

Peter Edelman, a top Health and Human Services bureaucrat, resigned when President Clinton signed welfare reform in the mid-‘90s. But no one in the Clinton administration batted an eye when the president lied to his cabinet officials about his affair with Monica Lewinsky, then sent them to tell that lie to the media on his behalf.

Before that, it may well go back to the “Saturday Night Massacre,” when Attorney General Elliot Richardson and Deputy Attorney General William Ruckelshaus resigned after refusing to follow President Nixon’s order to fire special prosecutor Archibald Cox in the Watergate probe.

On Tuesday, FBI Director James Comey laid out a convincing case against Hillary Clinton violating US law in her email scandal, only to end it by saying, “Although there is evidence of potential violations of the statute . . . our judgment is that no reasonable prosecutor would bring such a case.”

So far, there is no outrage at the FBI. No one has resigned. Why not? Either the investigators involved in this don’t believe the strong case Comey laid out, or no one cares.

What constitutes a “reasonable prosecutor”? The head of the FBI is a former prosecutor, but he is not a psychic. Where does this standard come from? Since Comey refused to answer any questions after his statement, who knows?

But we’ve been told all along Comey is a man of “high integrity” and “great character.” If he thinks laws were violated, why is he not for pressing the case?

When Comey said he and his team “cannot find a case that would support bringing criminal charges on these facts,” he should have looked a little harder. He should have looked to the case of Bryan Nishimura, a Naval reservist who served in Afghanistan in 2007 and 2008.

Ultimately Nishimura’s actions came to light “when he admitted to Navy personnel that he had handled classified materials inappropriately.”

Yes, he admitted it.

Moreover, the investigation into Nishimura “did not reveal evidence that Nishimura intended to distribute classified information to unauthorized personnel.”

Any of that sound familiar? Any of that seem like it might fit the case against Hillary Clinton?

No one thinks Hillary set up her multiple private servers to aid foreign enemies of the United States. She did it because she wanted to conduct her business in a way no one could monitor. Nishimura may or may not have “intended” to violate laws for handling classified material, but Hillary Clinton surely did by setting it up so the only way to communicate with her electronically was outside a government-approved and secured method.

No reasonable person can conclude the secretary of state can function for long without receiving classified information. That’s the nature of the job. Yet Hillary, to borrow a phrase from domestic terrorist and close friend of President Obama Bill Ayers, is “guilty as sin, and free as a bird.”

And no one has resigned in protest; no one has spoken out in disagreement. So either Comey is right, or there are no people of integrity left in government. There’s more evidence for the latter than the former.

By the way, in case you haven’t heard of Bryan Nishimura before, as it would appear Director Comey hasn’t, you can read about him in this press release from last year on the FBI’s own website, where all those quotes came from. Too bad Comey couldn’t find any case like it anywhere.