Why They Hate Us

Derek Hunter
|
Posted: Jun 19, 2016 12:01 AM
Share   Tweet
The opinions expressed by columnists are their own and do not necessarily represent the views of Townhall.com. 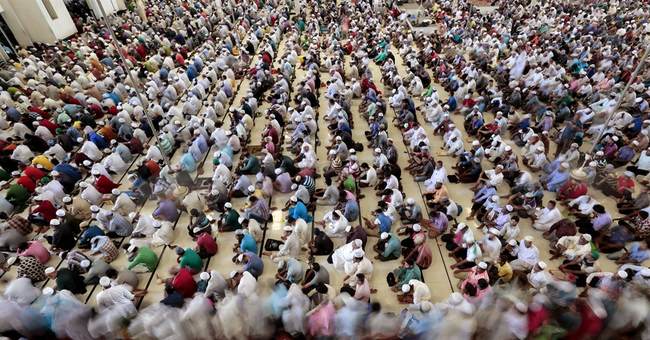 A stench of hatred was in the air, so palpable you could taste it. How anyone could feel such animosity toward people they’d never met, who’d done nothing but lead their lives in a way that harmed no one but did not conform to the world view of the man who wished to see them gone is something rational people cannot comprehend.

More confusing still was how that man and his likeminded comrades, so full of contempt for their fellow man, had obtained positions of power and gotten their leader twice elected president of the United States.

From President Obama and Hillary Clinton to Senate Democrats and the media, there is nothing out of bounds when it comes to what a progressive liberal can accuse a Republican of doing.

If you only watch network news and read the New York Times you easily could come away with the impression that last Sunday morning a conservative Christian man, draped in crosses and screaming “Make America Great Again,” walked into a gay bar and murdered 49 people on direct orders from Republican National Committee headquarters located in the basement of the National Rifle Association’s headquarters, naturally, in a space they rent from Fox News.

What kind of sick monsters blame the horrific actions of one man on their political opponents? A lot of them, it turns out.

To call the Orlando killer a man is being generous; he’s a now-rotting pile of human garbage stuffed with animal excrement. He also was, unquestionably, a radical Islamo-fascist committing a coward’s act against unsuspecting, unarmed people. Not sure why radical Islam deifies those who slaughter the defenseless – do they really think God looks fondly on the equivalent of pushing grandma down the stairs?

Although the poltroon declared his reasons, unambiguously, to the police and a local news station, Democrats saw an opportunity to advance their agenda of limiting the rights of all Americans. Ignoring the truth, every branch of the progressive left simultaneously and sanctimoniously struck the same cord – it was the gun’s fault.

There are as many, if not more, guns in this country than there are people. Yet, seemingly miraculously, if you believe the left, all but a rounding error percentage of gun owners manage to resist the urge to use that inanimate object to kill. Despite the “homophobic culture” leftists believe Americans live in, real “hate crimes” are rare.

In 2014, there were 1,402 reported “hate crimes” against homosexuals. The FBI defines a hate crime as “as a “criminal offense against a person or property motivated in whole or in part by an offender's bias against a race, religion, disability, sexual orientation, ethnicity, gender, or gender identity.” When you divide the population of the country by the number of anti-gay hate crimes reported, you have to go 6 zeroes past the decimal point before you hit a number, .000004. Hardly an epidemic.

The Orlando monster may have targeted the Pulse nightclub because it was a gay club (though he scouted Disney World too), but he committed his cowardly act because of radical Islam.

It’s more likely he wanted a soft target with the potential for a large body count with little resistance. People crammed into a small, loud, dark space presented just that.

Yet Democrats would have you believe somehow this jihadi wasn’t spurred to action through radical Islam, but Christianity and conservatism. That attempt is its own breed of evil and can come about only through pure hatred.

Pure hatred is the currency of the Democratic Party in the 21st century. Democrats try to blame their political opponents for every act of evil or terrorism committed on US soil. The media parrots these nefarious charges as gospel. The truth eventually comes out but only after the lie has taken root with many.

That’s how a registered Democrat and radical Islamist walks into a gay bar and murders dozens, and the debate focuses on the NRA and conservatives. The “grand lie” of Democrats becomes the narrative, so much so that when Sen. Joe Manchin, D-W.Va., states “due process is what’s killing us now,” it’s viewed as unremarkable by the media. The constitutional guarantee of a presumption of innocence until proven guilty was cast away like a dented penny into a fountain, and journalists treated it as a non-event.

Sen. Chris Murphy, D-Conn., launched a coordinated filibuster to demand all Americans have their rights curtailed as punishment for the horrific actions of one person. The government doesn’t make all children wards of the state because one parent was neglectful, but all Second Amendment rights must be squeezed because one angry, evil man did wrong.

As the Washington Examiner’s David Freddoso put it, “Not since Strom Thurmond had anyone seized the Senate floor for so long to deprive Americans of constitutional rights.”

Murphy mournfully recalled the memories of the children murdered in Newtown, then danced on their graves and those of the victims in Orlando by sending a fundraising email for Hillary Clinton on the subject the very next day.

Shameless. But not a bit surprising. Emboldened by their protectors with press passes, there is nothing they won’t exploit; nothing sacred or out of bounds.

The ends justify the means for the political left – and always have. Motivated by hate – for opponents, the Constitution and anyone who won’t submit to their belief of moral and intellectual superiority – there is no depth to which they will not sink, no pile of bodies on which they will not dance to advance their agenda. In then end it’s sad, it’s disturbing, it’s fascistic, and it’s progressive…and we are not, which is why they hate us.