Derek Hunter
|
Posted: Jan 10, 2016 12:01 AM
Share   Tweet
The opinions expressed by columnists are their own and do not necessarily represent the views of Townhall.com. 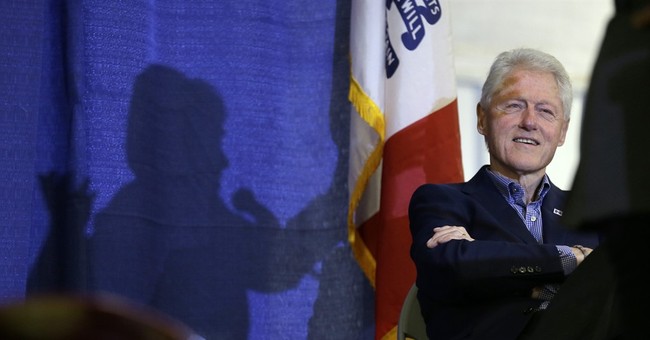 It must be nice to be a Democrat. Aside from the being an idiot part. And the hating America part, the loathing the military part, the despising success part, the envy, the hatred and the anger parts too.

The fact that so many of them are mutant, economic illiterates and save a fortune on their water bills by avoiding showering aside, I’m not talking about your drum-circling, living off of mommy and daddy’s money, social justice warrior Democrat.  I’m talking about the filthy rich, suckle government power, tell everyone how to live while living exactly the opposite way type Democrat – the ones giving the orders from the Ritz; not the grunts.

The grunts have it pretty easy too, don’t get me wrong. Remember Occupy Wall Street? They were going to change the world, according to the media, and bring about a “fair” Utopia that would reinvent our economic system. All they did was defecate on police cars, contribute to the resurgence of lice and bring the heretofore-unneeded concept of “rape-free tents” into the public consciousness. They were the “North African and Middle Eastern migrants” of their time – anything awful they did was ignored by the mainstream media to avoid upsetting the narrative. The narrative is everything.

The narrative of Occupy Wall Street faded because it didn’t catch on. In spite of the media’s help, the American people simply couldn’t be manipulated into believing they had less because someone else had more. The trust fund troubadours of Zuccotti Park, even with all their bongo playing and poetry slams, could not turn the have-somes against the have-mores. The world simply moved on.

The world would have moved on much sooner, or never have noticed in the first place, were it not for a media as interested in the agenda of the privileged poster-board-and-Sharpie set’s “economic justice” agenda as they are in adding another zero to their salary in their next contract negotiation.

In 2011, I broke the story of how “occupiers” discouraged the reporting of sexual assaults in their camps because reporting them would not reflect well on the movement. It was a story that got some attention, but it quickly faded. Not because it wasn’t newsworthy, but because it was.

The truth about the behavior of people in the “Occupy” camps across the country was appalling, but the “message” of economic inequality they were supposedly representing was precisely what progressive leftists wanted. What’s a few broken souls compared to the greater good?

In ways unthinkable to normal people, leftists use and dispose of people like smartphones – and there’s always another where that one came from.

That’s the mentality that has allowed Bill and Hillary Clinton to succeed as they have. The trail of broken souls, bloodied lives and discarded women are a small price to pay for the greater glory. Only, in the case of the Clintons, as is always the case with the Clintons, the only real glory is theirs.

The re-emergence of Bill’s women, both willing and unwilling, is being ignored by the media and being spun when they can’t ignore it.

With Juanita Broaddrick’s courageous return to the national scene, reporters are presented a choice: treating her how they’ve demanded all who claim to be victims of sexual assault should be treated, or ignoring her to protect the narrative of the Clintons being champions for women. Naturally they chose the latter. Progressives are progressives first and always.

Don’t get me wrong. I believe Bill is a misogynist, but not in the traditional sense. He trusts some women. He supports women. He’d do anything to help some women. But the rest he sees as non-entities existing for his pleasure and amusement.

Being a governor, attorney general and president afforded Bill the opportunity to appoint women to positions of importance and authority, and he did just that. The other women, those he didn’t view as equals worthy of admiration, he used as he saw fit.

Believe it or not, in the ‘70s, ‘80s and ‘90s, this flew in politics. As long as the women could be kept silent and you “didn’t embarrass your wife,” by “screwing around, playing grab-ass” with someone who was uninterested, it was just part of another day that ends in “y” for politicians. But it’s not that way anymore.

Yet a woman has believably claimed for almost two decades she was raped by Bill Clinton, and the very same media asks the accused and his presidential candidate wife if they think the subject is fair game. They weren’t made to answer the specifics – Bill’s lawyer dismissed the allegation with a couple of sentences in the ‘90s and, aside from the reiteration of that dismissal, has never spoken of it again. Because he’s never been asked.

By asking if Bill’s past if fair game, the media can pretend they aren’t ignoring the story. But that’s exactly what they’re doing.

They focus on Monica Lewinsky and Gennifer Flowers, lumping them in with Paula Jones, Kathleen Willey and Broaddrick like they are all the same. They are not.

Lewinsky and Flowers were willing and active participants in affairs with Bill; the others were unwilling victims of a man who’d been getting away with it for so long he had no reason to believe he couldn’t with them. And he did.

After swearing he was innocent and would never settle, Bill paid Jones $850,000. Willey got nothing because she didn’t sue. Broddrick is still haunted by what happened to her. And Bill and Hillary are marching right over all of them, and untold others, right back toward the White House.

This wouldn’t be possible with an honest media.

Herman Cain was driven from the 2012 race by accusations that look like a schoolyard prank compared to what the Clintons are accused of and have done. What happened to those sexual harassment charges? After Cain left the race, they appear to have left the planet.

The media was extremely interested in old allegations just four years ago; now they seek permission even to ask if they can talk about them. The only things that have changed is the seriousness of the allegation – they’ve gotten much more so – and the target of them.

Rather than ask the tough question and demand real answers, TV news presenters (because it’s rude to actual journalists to use the same term to describe them) now talk amongst themselves about whether claims against Bill should be relevant when it’s Hillary who’s running.

Considering the fact she lists being First Lady as one of her top qualifications for the job, in addition to him campaigning for her while she awards herself the mantle of “Champion for Women’s Rights,” she also led the campaign to protect Bill from “bimbo eruptions” in 1992. Hardly the act of a put-upon women who was wronged by her husband, especially when we now know she knew most of the women she smeared to protect the Clinton machine were telling the truth.

Meanwhile, the New York Times regales us with nearly tales of Marco Rubio’s wife’s driving record, and we’ve just spent a week discussing whether a child born to an American woman is a “natural born citizen.”

So are spouses fair game? You’re damn right they are.

There are more than 40 million voters this year who weren’t registered, or even alive, the last time a Clinton’s name appeared on a national ballot. They know about Monica, and they may have heard some of the other names. But they do not know the stories. They need to be educated. Sadly the media is too busy forming a human shield around the Clintons to bother asking the relevant and important questions.