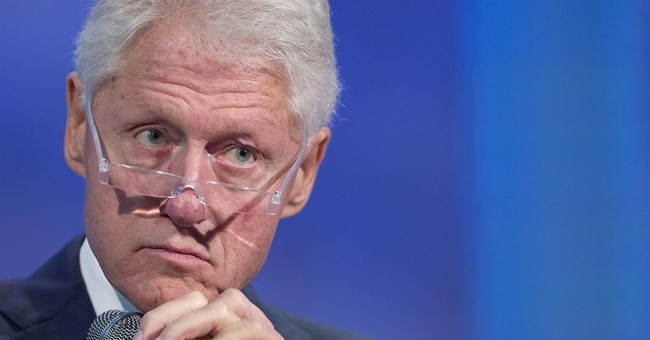 There are more than 40 million voters who were not on the rolls the last time Bill Clinton ran for office. As hard as it may be to believe, Bill has not had his name on a ballot for 20 years and hasn’t been a direct factor in a general election race since the American people rejected his vice-president in 2000.

But he’s back, and he will play a large role in this election because his wife is his party’s likely nominee. That and the fact he’s hitting the campaign trail on her behalf mean his past, ever last nasty bit of it, is fair game.

What an absurd argument Democrats have to make to remain in line with Hillary Clinton’s narrative. They must claim everything about Republican frontrunner Donald Trump’s life is fair game, and every comment he makes, no matter how accurate and common, is not. Moreover, he’s a “-ist” and a “-phobe._ What kind of “-ist” or “-phobe” is he? What kind do you want?

You name it; Trump has been called it. For that matter, everyone in the Republican field has been called racist, sexist or homophobic. If you’re unfortunate enough to get your news only from the mainstream media, you’d think the most diverse field ever to seek a major party’s presidential nomination was a Klan rally.

Of course, the Democratic Party was the party of the Klan, and its debate stage resembles a cross burning. The song “Whiter Shade of Pale” should bump in and out of commercial breaks. But that would be too honest for the media, as would telling the truth about Bill and Hillary Clinton.

Bill Clinton wasn’t the “Teflon President;” he was the “Latex President” – nothing got to him. He always had a buffer between him and the consequences of his personal actions. And, in most cases, that buffer was Hillary.

She was more than just an enabler. Hillary was a co-conspirator.

Famously leading the charge to contain Bill’s “bimbo eruptions” in the 1992 campaign, she wasn’t ignorant of her husband’s predatory nature; she only hoped to conceal it. And she did … by beating these women down.

At least until Monica.

When the story of Bill’s affair with intern Monica Lewinski broke, it was Hillary who was front and center denying it on the Today Show. Knowing full well her husband’s penchant for other women, she lied about a “vast right-wing conspiracy.”

The media, being the media, followed her lead and this “conspiracy” became the story. The Clinton machine even painted Monica as a “stalker” crushing on a sweet, trusting, father figure Bill.

Hillary may or may not have led the charge, but only the most naïve of observers would believe she was not fully aware of the strategy. And it nearly worked.

Were it not for the blue dress, Monica Lewinski would be a forgotten footnote of an obsessed young girl who fell for her boss; a future Double Jeopardy question no one would answer.

But Monica wasn’t alone. Kathleen Willey claimed to have been groped and propositioned by Bill in the Oval Office. Juanita Broaddrick came forward with her allegation that then-Gov. Bill Clinton had raped her. Both had evidence to back up their claims, and both came under hellfire from the media and the Clinton team. Hillary was a member, if not the leader, of that team.

Her future was intertwined with his. They were a “two for the price of one” proposition, after all.

Bill told the truth about Monica because he had no other choice. Team Clinton could discredit a young girl, critics, the prosecutor, anyone who stepped away from the narrative, but they couldn’t discredit DNA.

The army of flying monkeys Team Clinton dispatched to deflect and deny the truth of Monica for months, costing taxpayers untold millions, no longer could do so. The rest didn’t have a blue dress.

All of Bill’s other women, and there were many, were attacked and dismissed using tactics from the Hillary-led “bimbo eruptions” squad. Hillary knew the pattern – she’d created it and knew the need for it. To say, as many in the mainstream media have, that this is somehow “off limits” is, for lack of a more-perfect word, insane.

Some, in particular on MSNBC, have claimed “sexism” in making Hillary responsible for the actions of Bill. They, of course, focused only on Monica and not the assault or rape allegations (or the numerous other affairs) because, well, it’s MSNBC. They, and the rest of the Democratic activist class, are counting on people not remembering what Bill, or Hillary, is really like.

Those 40 million new voters need to be educated.

For conservatives, a Hillary Clinton candidacy could not have come at a worse time – with the party so divided. But it also couldn’t have come at a better time. The left, aided by Hillary herself, have made the “sexism” allegation “proof” in and of itself.

When asked about this, Hillary’s response was, “Well, I would say that everybody should be believed at first until they are disbelieved based on evidence.”

None of Bill’s women have been disproven “based on evidence.” Yet this question did not come from anyone in the media; it came from an audience member at a town hall meeting. As long as that’s the case, what Donald Trump is doing lately is invaluable.

The media won’t talk about Bill’s record of treating women like trash because they’re complicit it in.

So although, for example, Marco Rubio’s wife’s driving record warrants a New York Times exposé, the partnership between a former president and his enabler wife is somehow “off limits.”

If holding Hillary accountable for enabling Bill is beyond the pale, perhaps she should remove being First Lady during his administration from the top of the list of her accomplishments on her campaign website. Otherwise, journalists need to ask questions, and follow-up questions, of both her and Bill about both of their actions, no matter how old the allegations are.

These are rules and standards liberals pioneered and imposed on everyone else; it’s about damn time they’re forced to live by them too.