The Democratic Party Is A Death Cult 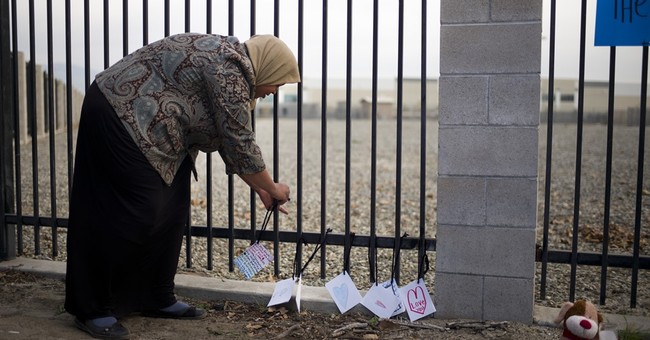 I am so sick of these progressive Democrats waiting to pounce on death and exploit it to their advantage. It takes a special kind of person to do it, to see something awful unfolding on television and think, “How can I use this to my advantage?” That’s the modern American left, and it has to be destroyed.

While the San Bernardino terrorists were still at large, all three Democrats running for president took the opportunity to call for gun control. That’s the sort of sociopathic disconnect from human decency we expect from serial killers, not someone who seeks to become the next leader of the free world.

These people spent the week after two Islamic terrorists murdered 14 people blaming inanimate objects for their actions and seeking to take rights away from innocent Americans. Progressives continually seek a Reichstag burn in order to empower government over the individual.

There is nothing they won’t exploit for their cause. They will goosestep “forward” over any terrain. Over the bodies piled deep in the cities they control or the 100 million their philosophy deprived of life in the last century; nothing short of everything is enough.

The New York Times hasn’t run a page-one editorial since 1920. Pearl Harbor didn’t warrant one, nor did 9/11. But the terrorist attack in San Bernardino did.

It wasn’t to condemn the attack, nor was it to call for reform of Islam to purge its radical elements. No, it was a call for your rights to be curtailed.

See, the Reichstag burned this week, even though it didn’t catch fire at all.

From the moment the first shot was fired, the progressive left snapped into action. Anchors and talking heads were postulating it had to be a right-winger, it had to be at a Planned Parenthood. And they knew the only “solution” to a problem still happening was to strip you of your rights.

But a funny thing happened on the way to the Reichstag fire: the fire burned itself out. The terrorist, Syed Farook, and his mail-order accomplice, weren’t white Christians; they were radical Islamic terrorists. That wasn’t the narrative.

Democrats view terrorism, and groups such as ISIS and Al Qaeda, as distractions. They don’t honestly care to defeat them; progressives’ focus is domestic. Barack Obama didn’t run to “fundamentally transform” the world, only America. In a world full of dictators, despots and strongmen, Democrats see the biggest problem in the world as free American people.

Obama only bothers himself with matters outside our borders when he can use it to his advantage domestically or when he has to. After the Charlie Hebdo attack in January, he couldn’t be bothered to show solidarity with the leaders of the free world because he doesn’t have solidarity with them. After 130 people were slaughtered in Paris, he could only bring himself to call it a “distraction.”

When it’s “Agenda Über Alles,” bodies are “bumps in the road.”

After San Bernardino, progressives were ready. It was the right’s fault, aided by guns; and the only “sensible” response is more gun control.

Still high on the Colorado shooting by a lunatic with no electricity or running water in his woodland shack, they set the ball in motion. It just didn’t work out for them.

When the terrorists were identified, the left was hesitant. This was, after all, San Bernardino, not New York. Who attacks there?

But the ball was in motion, even though it had been knocked off track. Still, patience had run out. In spite of the facts, they’d made their move and they’re sticking to it.

Congressional Democrats, the White House, the media – it’s all gun control. Farook’s burqa-wearing wife praises ISIS in the middle of the attack, but it’s the gun’s fault. Moreover, it’s your fault for having the right to own a gun. And you, not terrorists, must be stopped.

It’s ironic the same people who claim it is “open season” on young black men by the police openly say police are the only people in society who should be trusted to have access to guns. They either have absolute faith black voters won’t draw the line between their two points or in the media never putting those points in public view together.

That’s neither here nor there. The greatest killer of young black men isn’t police, nor is it legally sold firearms. It’s other young black men with illegal guns. Yet the left isn’t going after them either, or illegal guns. Again, bodies are an opportunity or a distraction, not real people.

No, the switch has been flipped. The paper of record for the rich, white cocktail party set put it on the front page. Page one to write this:

Opponents of gun control are saying, as they do after every killing, that no law can unfailingly forestall a specific criminal. That is true. They are talking, many with sincerity, about the constitutional challenges to effective gun regulation. Those challenges exist. They point out that determined killers obtained weapons illegally in places like France, England and Norway that have strict gun laws. Yes, they did.

But at least those countries are trying.

The last line is the progressives’ mindset…and cover for government power grabs. That’s not a coincidence.

During, not even after, San Bernardino, came the calls to “do something!” It’s the same calls heard in Moscow before the revolution, the same heard in Berlin after the Reichstag fire. Always the same. Tyranny always waits for an opportunity and opportunists willing to exploit it.

This is how liberty gets smothered – by “good intentions.”

When I hear Republicans and/or conservatives whine about this, that or the other thing when it comes to someone who agrees with them 80 percent of the time, I’m reminded of why we lose.

I’m reminded of the libertarians who cheered as McCain lost states on Election Night 2008. They weren’t cheering each Obama win (at least most weren’t); they were cheering each McCain loss. They hated McCain that much.

Their cause, as is ours, is now set back to the point it may be impossible to achieve. But they still have their self-righteousness.

Every day I see allies attack and impugn the intelligence of fellow fighters for liberty in the same trenches over who is “more” this or that. Frankly, given what we’re up against, what the other side wants to do, who gives a damn?

The next president can do a lot of damage; they’re right. But any of the Democrats will do more damage than any of the Republicans. If you’re willing to sit out this election because your candidate doesn’t end up being the nominee, you are, with all due respect, an idiot. I’d use expletives, but it wouldn’t get past the editors.

It’s awful that our choice might be between someone who isn’t great and someone who is awful, but you dance with the girl who brung ya. I’d not only vote for Lindsey Graham, I’d work tirelessly to elect him if he wins the nomination. So when I read stories of moneyed insiders threatening to sit on the sidelines if their candidate isn’t the nominee I have to wonder how these people benefit from a Hillary Clinton presidency.

Anyone who doesn’t do all they can to win for whoever the Republican nominee is has thrown in with the left. They’re urinating on the Constitution. They’re only interested in themselves. Their network, their casinos, every crevasse from which they derive their money will never see a penny from me.

The stakes are too high to accept anything short of vanquishing progressives in the next election. To Hell with them. If you aren’t on board for beating them, you’re on board with them.

We have just over a year of a rampaging President Obama wiping himself with what makes our country great. We can survive that. But if we get four more years of a Democrat, you can not only kiss the Second Amendment goodbye, you can forget it all. You can either be smugly proud of whatever sick moral victory you’ll claim because your candidate was better, or you can save the Reichstag, and the Constitution, from the flame.

And to those of you who always write (usually liberals) when I make Reichstag or similar analogies: you stop acting like them, and I’ll stop comparing you to them.