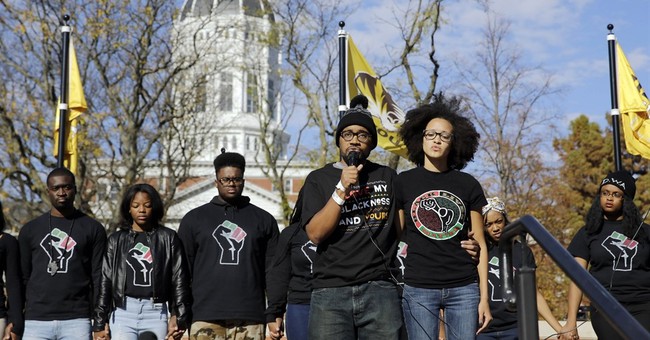 You used to think of college as the “best years of your life,” right? Now, most of us know and are grateful our lives didn’t peak in the first four years after high school and that the rest was not just one slog after another till the bitter end.

But whatever good you do remember about college probably is not there anymore.

Unfortunately it’s gone from a place of higher learning to a “safe space” where people are encouraged to “find themselves.” It’s now a stupid factory churning out selfish, indoctrinated mutants with $100,000 in debt and a sense of entitlement that makes Veruca Salt look like Mother Teresa.

Now a couple-dozen students can bully everyone into submission by simply claiming racism. Administrations collapse faster than Lamar Odom at a brothel, so why not ask for special treatment? Once you’ve degraded the power structure of a university to a genie in a bottle, just keep wishing yourself more wishes.

While these spoiled, self-entitled snot-rockets ruin other people’s learning experience, we’re left to take comfort in the fact they’re basically making themselves unemployable in the future. Memories fade, but the Internet is forever.

Any potential employer who doesn’t Google the names of prospective hires is a fool; and any prospective employer who finds a probable hire took part in these campus hissy fits would be a moron to hire them. Why would you hire a lawsuit waiting to happen? Or an all-purpose client repellent? Or someone likely to require “me days” when not properly cheered for making it out of bed in the morning?

Moreover, why would you hire someone with the stated philosophy of George Wallace in the schoolhouse door?

The protesters – black, white, and every other color of human – want segregation. They support “safe spaces” for “students of color” as if being black means you need a playpen when unattended. It’s horribly racist, but they’re too uneducated and have been too coddled to know better.

It’s their lives to ruin, so who cares? It means less competition for real jobs for people who went to college to learn. That is, after all, supposed to be the purpose of it.

Sure, left-wing think tanks and progressive activist groups will snatch up some of the more active mob members. But this will turn out as well as it has for these left-wing progressive universities – like Dr. Frankenstein inviting the monster in the castle for lunch. It will be glorious when those chickens come home to roost.

College was viewed as the best time of your life because you were allowed to have the best time when you were there. Hopefully you’ve had better times since, but the potential was there for a lot of fun.

Thanks to these goons, treating people as individuals is fast becoming a relic of the past. Colleges increasingly require mandatory indoctrination classes under the Orwellian “cultural sensitivity” title for incoming freshmen. Racially segregated housing and relaxation/social areas are cheered as an accomplishment. The belief that you can only learn, or learn better, from someone who shares your melanin levels is accepted as the new gospel, and administrators are under pressure to reflect that in hiring.

Honestly, aside from the racial diversity of the crowd, there’s very little difference between what these few students demand and what the KKK stood for back in the Democratic-controlled South and Midwest. Mostly because they were Democrats then, and they are Democrats now.

College as you remember it no longer exists, if it ever did. The parties, the fun, the learning are all now peripheral, subjugated to the progressive agenda being funneled down the throats of normal people who simply want to learn, graduate and get a job.

College is now a small band of “social justice warriors” so tightly wound by professors and Democrats around the concept of “injustice” they want to “do something.” Unfortunately for them, modern America isn’t overrun with injustices, so slights must be manufactured and imagined.

Insignificances become outrages because these people need to feel as if they matter.

Until some president of a major university stands up to these privileged children and their moneyed masters (if you think they aren’t funded and led by wealthy progressives, you’re crazy), expect the drum circles to grow.

But know, the larger the “safe spaces” get, the smaller freedom gets. Each time the baby gets its bottle the crying stops, but it will be hungry again soon. So don’t be envious of the adventures college students are having. College isn’t what you remember. It’s less Animal House and more green room at MSNBC. In other words, it’s Hell with chants from the ‘60s.