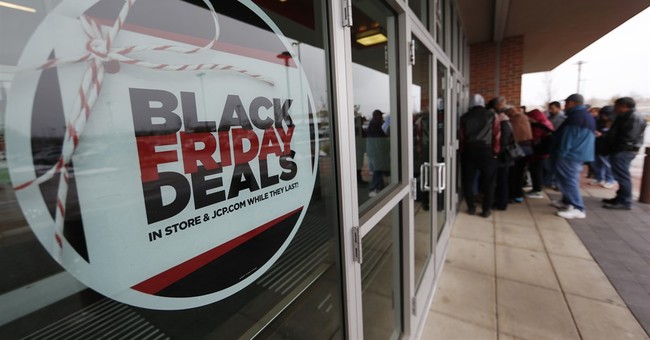 I love me some Black Friday. Always have. There’s something about a deal I can’t resist. Add to it the energy around the anticipation of the doors opening, and it’s the Kentucky Derby for people. But what started as a good way to save money on some things you wanted has turned into “The Purge.”

My love of Black Friday goes back to my early days in Washington. I worked in the bookstore at the Heritage Foundation. It was an entry-level job answering phone calls of donors who wanted books and papers Heritage had published. It was a “would you like fries with that?” job where I had to wear a suit.

The bookstore was on the 4th floor, so there wasn’t any foot traffic, only phone calls. And the pay was, well, what you’d expect for an entry-level job, certainly not what I wanted to do for the rest of my life. As I told them in the interview, I only wanted a foot in the door – I’d wrestle the rest of my body through on my own.

After volunteering to help policy analysts do research on education and Latin American policy in my free time, I did get out of the bookstore and into health policy. My satisfaction skyrocketed. My pay, alas, did not.

So bargain hunting was a priority.

When I graduated and got a job in D.C., I had no money, and D.C. is not only recession-proof, it’s Manhattan-esque when it comes to rental prices. I could have rented a one-bedroom apartment for the low, low price of 75 percent of my pay or lived with roommates I met through a classified ad. Liking the stuff I’d accumulated to that point and having cats I wouldn’t trust with strangers, I opted to live in Baltimore for a quarter the price and take the train to work.

After a year, I was able to afford cable, but my 27-inch tube TV wasn’t cutting it. Flat screen TVs had been out for a few years, but they cost more than my rent. Still, I’d been watching the prices for at least a year, biding my time. Then, on Thanksgiving, while perusing the sales papers I noticed a “door busters” at Best Buy for a 32-inch flat screen Westinghouse TV for either $299 or $399, I can’t remember exactly. All I knew was I wanted it.

HDTV was new, and it was awesome.

Seeing how clear TV could be was like eating filet mignon for the first time after only having eaten Salisbury steak before. It was a whole new world, and it was delicious.

I’d resolved to stay up all night, go down to Baltimore’s Inner Harbor (at the time there was a Best Buy there) and complete the quest.

I jumped in a cab at 4 a.m., got down there and saw a huge line waiting for the doors to open an hour later. I gave up, told the cab driver to drive me the mile back home and fell asleep.

I woke up at 10 a.m. to the mocking blue glow of the tube TV I’d wanted to replace only to find Staples, of all places, was offering a no-brand 32-inch flat screen for the same price. There was a store downtown and I figured no one would go to an office supply store to buy a TV, so I had a chance.

Both ads said there were at least 10 per store, and though I was convinced the few hundred people at Best Buy had snatched up my dream, the place with reams of paper surely wouldn’t let me down.

I got there and they had three in stock. I stared at it because spending that much money made me nervous. I kept thinking, “What if is sucks? What if it breaks?” I wasn’t convinced an office supply store would be the best place to deal with when it comes to anything other than a printer breaking.

I smoked at the time, so I stepped outside think about this for a moment.

While smoking that cigarette I saw the yellow Best Buy sign a block away. I had to know.

So I walked down there and asked a blue-shirted associate if they, by chance, had any door-buster Westinghouses still in stock.

The big line had not formed for my TV; it was there for a deal on desktop computers. All I knew was I had a new TV, was floating on air and was enjoying a crystal clear TV picture with my cats.

Yes, it’s as pathetic as is sounds, but at the time it was awesome.

No one was trampled; no one was shot.

Now, every Black Friday we’re inundated with stories of people being trampled to save $100 on a video game system. I’m all for saving money, but I draw the line at putting my size 15 Converse All-Stars on the face of a grandmother to do it.

The National Guard is deployed to patrol Walmarts and Targets. Police sit in parking lots of Best Buys, and people inevitably are arrested for fighting over the latest, greatest plastic thing six months away from being forgotten in the back of closet.

There’s no lesson here, at least not an obvious one. I’d like to say I’ve become enlightened and just watched football all day on Thursday, but I didn’t.

My wife, my sister and I jumped in the car after dinner and headed to Best Buy to pick up some PS4 controllers and iTunes gift cards while slam-dancing with people looking for their own version of my 32-inch Westinghouse from a decade ago.

We could have waited. We could have ordered these things online. But we would have missed the rush of being a part of it live.

It’s now Friday morning, and I’m heading out again (there’s a deal on cat litter and other things I could easily buy another time). I don’t know if it’s a good thing or a bad thing, but it’s a thing. But it’s my thing, and clearly a lot of other people’s thing too.

I make more money now, but I still love a deal.