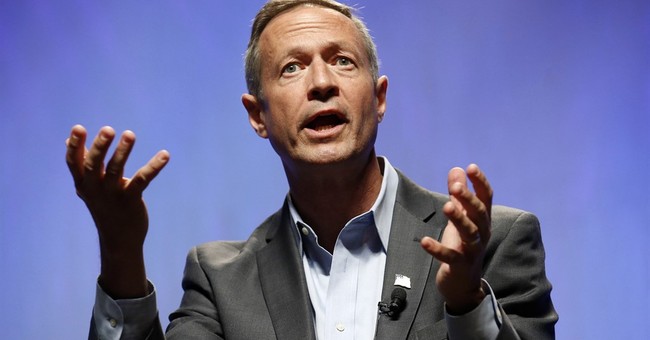 Who would have thought it? With all the issues facing the country and the world, the thing that got people the most upset so far this election season is a politician saying “all lives matter.” But that’s where we find ourselves, and it’s incredibly sick.

A group calling itself #BlackLivesMatter has become a vocal part of the progressive left. It is not a productive part, nor a large part. But it is extremely vocal, and the squeaky wheel gets the grease.

Last weekend at Netroots Nation, which is sort of like a CPAC for the left, #BlackLivesMatter threw its latest temper tantrum by shouting two Democratic Party presidential candidates off the stage. Former Maryland Gov.

Martin O’Malley committed the only sin left for progressives. The leftist blog Vox described the scene this way:

Bernie Sanders, senator from Vermont and avowed socialist, who was arrested in 1963 while protesting housing discrimination, suffered the same fate. Being involved in the civil rights movement since before #BlackLivesMatter whiners were born didn’t give him any cover from their hissy fit.

Vox described it this way:

Sanders was defensive and cranky toward the protesters, saying "Black lives of course matter. But I've spent 50 years of my life fighting for civil rights. If you don't want me to be here, that's okay." At other times, he didn't acknowledge the protesters at all and raised his voice to be heard over them (which some attendees saw as Sanders "shouting down" the protesters).

Hillary Clinton was smart enough not to attend the fanatical event but did kiss the ring of the left’s flavor du jour on a Facebook chat a day later. The Washington Post “reported” her staff had learned the secret pandering handshake from seeing her rivals shouted off the stage by writing, “She said it. She really did. Actually she typed it. But still, there was no hedge.”

Forget the fact that back in June these same progressive race-baiters were calling Hillary a racist because she said “all lives matter” at a black church, she’s learned from her mistake. The Post continued its orgasm, “’Black lives matter.’ With those three little words, Clinton acknowledged that there are myriad ways that race continues to shape life in America that have almost no relationship to pocketbooks, educational credentials or class.”

Yes, there are “ways that race continues to shape life in America,” but it’s mostly through its exploitation by leftists to manipulate and divide people. And it works.

Democrats have the black vote the way cult leaders have the loyalty of their flock. No logic, no facts, nothing will change that. Cities where black people live in this country are where the Democratic Party has a solid, generational grip on power. They’re also, on average, economically depressed, high-crime areas.

The crime is driven by economic depression – where there is little hope of a job, crime is often the only way to earn money – but the economic depression is driven by Democrats’ economic and social policy. Democrats create the problem, blame racism for the problem, smear those offering a different way (a way working elsewhere) as racists or “uncle Toms,” maintain their power, lather, rinse, repeat. The #BlackLivesMatter crowd is just the latest incarnation of this tactic.

That “death at the hands of police” is largely a lie doesn’t matter. Fear trumps rational thought. Black Americans, like all Americans, are exponentially more likely to be murdered by someone with their same melanin levels than by police, but there’s no power and no money in addressing that, so it goes unsaid.

All lives matter, but “all lives” don’t lead to votes, and neither does honesty or rational thought. If skin color determines one life to be worth more than another, then the value of life is malleable and open to manipulation. If which lives “matter” can be determined by political whims and lies, then no lives really matter.