The Dangers Of External Validation 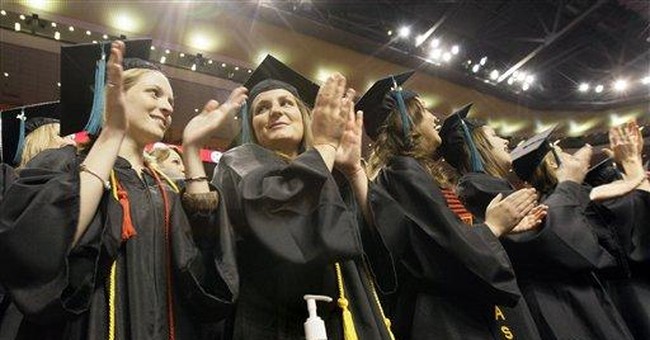 No generation has received more validation than the one currently in high school and college. Participation ribbons, sports with no scorekeeping, play-dates, being told they’re something worthy of celebrating simply because they exist, etc., has marinated these precious little darlings in a protective cocoon of “special.” There’s going to be a Mothra-sized butterfly that pops out of that cocoon and wreaks significant damage, either on them or the rest of us, when they reach adulthood.

It’s important to remember that these little monsters will one day control the levers of power. What they do with those levers can be seen in high schools and college campuses across the country now.

Simply saying, thinking or doing the wrong thing would be bad enough, but you will also feel the wrath of these special monsters if you don’t engage in what they determine to be the correct thing.

Indifference used to be the desired state of existence toward people with which you disagreed. Not anymore.

I’m not talking about the brats at the pool party in Texas, they’re but one annoying pimple on the acned face of fascism and stupidity in training. They haven’t even approached maturation.

The real monsters are the ones who enforce speech codes, demand “sensitivity training” for everyone because one person acted in a way they disapproved of.

They’re the people Jerry Seinfeld was talking about when he said college kids “don’t know what the hell they’re talking about” when it comes to cries of “ism” and “phobe.” They’re the people who need “safe rooms” because someone who holds a different opinion than theirs and will be expressing it on campus. They’re the ones who believe in such ignorance as “microaggressions,” an “ism” or “phobe” between two or more people that is so subtle that neither the victim or the perp recognizes it’s happening.

Yes, they’re that pathetic. And dangerous.

Right now stories of their temper tantrums anger and amuse those of us who’ve moved past our school years. But these entitled brats are graduating, and while fewer of them are getting jobs than ever before, they will eventually work their way into the bloodstream of society.

Once they metastasize fully into society, many of them wise up and realize how ignorant they were in their youth. But many of them will fall into the groove now being carved out for them by otherwise unemployable community organizers and the professional “social justice warrior” class. The media used to treat these fringe elements the way they deserved to be treated – out of touch extremists incapable of operating anywhere but the edges of the culture. They still are, but they’ve pushed their way off that edge of culture into the media where they are treated as serious thinkers.

Simply being on TV grants someone, no matter how wrong, an air of authority. Just as the title of Republican or Democratic “strategist” is a made up term to fool the audience into thinking the only person available to make that TV hit knows what they’re talking about (there is no such job in real life, it’s just given to people who can regurgitate talking points on TV without freezing), we know have “social justice lawyer” or “civil rights leader.”

When you see those titles on TV you are being lied to. That people with those titles are on TV means the news organization broadcasting them is in on the lie.

But like all of history’s greatest liars have proven, there’s always a receptive audience for lies. TV makes them easier to spread.

As awful as it sounds, there is a sizable and growing audience willing to accept those lies as true. They’re young and will be around long after we’re gone.

They’re in or just out of college, struggling, and have been raised to believe they’re each a unique little snowflake and their every thought is valid and must be adhered to. They got this way because their parents told them it was true, their teachers told them it was true, their televisions told them it was true. The years of their existence that matters happened in the time of selfies and every mundane activity being met with “likes” on their Facebook page. Unpleasant thoughts and people who threaten their comfort cocoon are unfriended or blocked. Aside from the few moments it takes to block someone on social media, it’s possible they may have never been exposed to an opinion contrary to their own.

These people will achieve positions of influence and power, even if only through attrition. Many will be full-blown narcissists in constant need of validation from others and be willing to do or say just about anything to get it.

While pandering can make you popular with the masses, it makes for a horrible leader. It emboldens people to lie, both to get adulation and because they can. And people will be reluctant to question those lies because they are either in ignorant agreement or afraid of the inevitable attack that will follow doing so. It, well, it’s a lot like Barack Obama when you think about it. But on a lot larger scale.