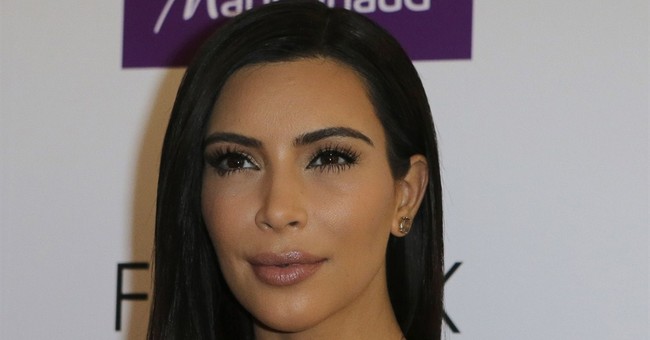 Let’s be honest: It is just an unfortunate fact that Hillary Clinton stands a good chance of becoming the next president of the United States.

As unappealing as that prospect is, it’s true. It has nothing to do with policy – aside from being old enough, Hillary lacks any qualifications a nation should desire in a leader. It has everything to do with celebrity, and the Clintons are the political Kardashians.

Aside from making millions upon millions of dollars, what do the Kardashians do? Yes, they have businesses now, but they’re all based on, and sell, the celebrity they have. They didn’t create anything; they didn’t start companies that employed thousands of people and then become famous. They did all of that afterwards to wring every last dollar out of that fame. And God bless them for it.

The Kardashians are true capitalists – they saw an opportunity, seized it, and made hundreds of millions of dollars off it. Sure, it all started with a sex tape that only a decade earlier would have had the entire family hanging their heads in shame, but the moral degradation of society they spearheaded aside, they earned their money.

Granted, they earned it through no real talent, skill, intellect or any other attribute that could be considered beneficial to society, but they played the cards they were dealt and made a fortune. They are the embodiment of the American Dream, at least in concept (execution is a different story).

The Clinton family has done pretty much the same thing.

The Clinton wealth comes from Bill Clinton being elected president. It’s safe to say that no one in history has milked more personal wealth from past elected office than he has. Hillary’s fame comes from having married him and not divorced him after numerous affairs. Although there (thankfully) wasn’t a sex tape, Hillary’s parlayed her victim status from the Monica Lewinsky affair into a U.S. Senate seat from a state she’d never lived in.

Hillary had gone to good schools and practiced law, but she was nothing special, just Bill’s wife. Kim had grown up around rich and famous people, but no one cared who she was because she hadn’t done anything.

Media attention elevated both, especially after the sex scandals in which they were involved. Sympathy was drummed up for Hillary; curiosity for Kim. But the result was the same: elevated, unearned status to the point of being culturally important.

Hillary Clinton had accomplished nothing in life that hadn’t been accomplished by 100,000 other female lawyers in the country except for one thing – she married a guy who became president. Deciding to live life as an enabler of a sexual predator has rewarded her with fame, incredible wealth and unimaginable power. But she didn’t really earn any of it; it was, for the sake of brevity, given to her.

In a very real sense, Kim Kardashian has accomplished more than Hillary has. Yes, Hillary was twice elected to the Senate, but that came largely as a result of sympathy and a famously inept opponent. New York Democrats essentially cleared the field for her, the general election (after former New York City Mayor Rudy Giuliani dropped out because he had been diagnosed with cancer) was a formality. It could not have been easier if she’d been appointed.

Hillary had no real qualifications to represent New York in the Senate, and she had no real accomplishments in the Senate. But she was portrayed as a star because of who she was, much like celebrity magazines put Kim on their covers because she exists.

From the Senate, Hillary ran an awful, aimless campaign for the 2008 Democratic Party nomination for president, losing to a man with even fewer achievements on his resume. She was appointed secretary of state not for her ability, but to prevent her from mounting a primary challenge in 2012.

With zero foreign policy experience, Hillary was a disaster running the State Department. Her ineptitude was so obvious from the start that President Obama did not involve her in the most complex foreign policy area on the planet – the Middle East. Three days into his presidency, President Obama created the position of “United States Special Envoy for Middle East Peace” and appointed former Sen. George Mitchell to fill it.

Kim Kardashian is paid to show up to events and be seen as a way to draw attention to the events. She is not expected to say or do anything important. As secretary of state, Hillary Clinton was paid to show up to events, draw attention to them and be seen as showing the United States cared about them. But she didn’t do or say anything important. That job was left to Mitchell.

In many ways the Kardashians are better than the Clintons. Sure, they’ve lowered the bar of celebrity and degrade our culture, but people have to voluntarily choose to empower and enrich them. The Clintons have been empowered and enriched at our expense.

Given the choice, I’d rather see Kim Kardashian in the White House than Hillary Clinton in 2017. We’ve literally seen everything both have to offer, and although what Kim offers is worthless and damaging, at least she doesn’t complete the Clinton trifecta of being corrupt to boot.