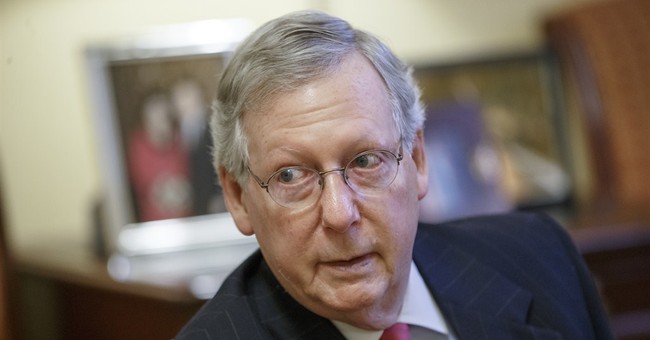 I mean this with all due respect – you’re worthless. Actually, you’re worse than worthless; you’re the problem.

You were better as minority leader. Your steering the Senate is worth than Harry Reid’s corruption. It’s almost enough to make me wish you could switch back places.

What happened to all the tough talk when you were running for re-election last year about standing up for conservative principles? It seems like you lost something after November – like your pants fit a little looser, and it’s easier for you to ride a bike.

You’re the majority leader of the United States Senate, I suggest you find what you lost (or at least severely tucked) and start acting like it.

If Democrats want to filibuster funding the Department of Homeland Security, make them filibuster it. Keep the Senate open 24/7 and make them hold the floor. Meanwhile, you and your members explain to the American people why nothing else is happening in the Senate until Democrats stop their filibuster.

That is, of course, if you have any interest in doing what you’ve publicly said you wanted to do. You’re old, probably too old to run again, so you have no reason to care what your supporters want. You’ve moved into legacy territory. So was everything you’ve said about President Obama’s executive amnesty real or a lie to get this last term before you slip into oblivion?

Well, your legacy is complete. The history of your tenure will be written…in Spanish. Actually, it won’t be written. No one will remember you as anything but a footnote with boot prints on your back from where Democrats walked all over you.

But if you had any desire to not be that joke, to have difficulty riding a bike again, might I suggest you act like a leader. I realize this may be unfamiliar territory for you, but just ask yourself “What would Harry Reid do?” and go from there.

Since that’s probably a bridge too far for you, I’ll help.

In addition to forcing Democrats to conduct a real filibuster, consider one of the following options:

1 Let Homeland Security shut down. Considering roughly 90 percent of the people who work there are “essential,” no one will notice. Democrats and the White House will scream and cry, but you have the truth on your side. More than that, you have the American people on your side, who oppose the president’s illegal amnesty action. If you can’t effectively message that, even with the media working against you, you should quit.

2 Work with the House to bring up a “clean” bill so the Democrats won’t filibuster it, then offer the blocking language as an amendment. Use the exact same language from a stand-alone defund bill so the Democrats you would be offering cover would either have to vote for it again or vote against it. Then, when you move to final passage of the amended bill and Democrats filibuster again, make them actually filibuster. Keep them there 24 hours a day, 7 days a week until they give in. Then they’d be filibustering a bill over language many of them supported just a few days earlier.

3 Screw the filibuster. When Harry Reid changed the filibuster rule he made it perfectly clear that rules and traditions mean nothing; it’s the progressive agenda he’s loyal to. That’s how Democrats ran the Senate; give them a dose of their own medicine.

Isn’t it time you start leading?

I know you’re afraid of Democrats and the media painting you as anti-immigrant racists, but they’re going to paint you as that no matter what. If you left your wife and married and divorced a series of illegal immigrants for the express purpose of preventing their deportation, they still would call you a racist. After all, you aren’t the fiancé of the disgraced former Democratic governor of Oregon, you’re a Republican, so you can’t get away with that.

There’s nothing you can do to appease the left. Nothing. You have to push them into a corner and give them no other choice but to do what’s best for the country. And you’re never going to out-bribe them either.

You’re worried about the Hispanic vote. I get that. But Republicans will never, ever win the votes of any Hispanics who can be pandered to through identity politics. That’s where Democrats live; they created the concept.

What you can do is make the case, continually. Well, not you exactly, but you can empower and elevate other Republicans to do it. Let’s be honest: You aren’t exactly a compelling leader. You have all the charisma of a sweaty undershirt. You couldn’t even inspire your own shadow to follow you into battle. So stop speaking publicly and let others do it.

And don’t waste time arguing overreach or the Constitution. Most people’s eyes glaze over when Republicans do that on this issue. But they do care about jobs. With high un- and under-employment, people get that 5 million more people competing for limited low-to-no-skilled jobs means Americans will suffer.

Democrats don’t care about people suffering. Suffering forces them to the government teat and increases the chance they’ll vote Democrat for life. But it’s an awful, soul-sucking life of dependence. If you and your colleagues can’t message against that…resign.

It’s go-time, Mitch. You’re either a man of your word, or you’re not. If you are, you will stand firm now NO MATTER WHAT. And if you do, the grassroots will rally around you and your fellow Republicans in ways you couldn’t even imagine.

If you don’t, the long-lasting wrath of those same people, the people you need, will turn against you in a way that should have you ordering staff to stop unpacking boxes in your new majority leader offices because you won’t be there long.