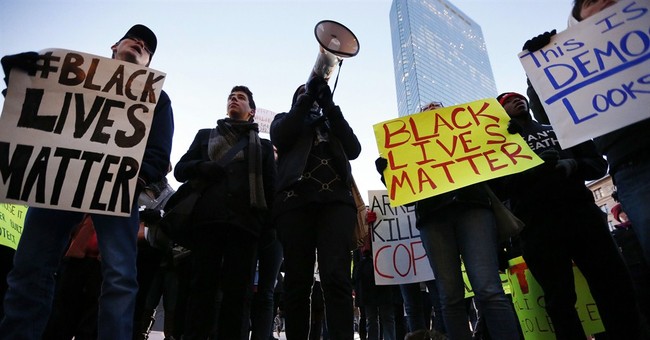 In watching the anti-police protests over the last month you may have found yourself wondering what it is, if anything, these people blocking traffic want. Chants of “No justice, no peace,” are meaningless platitudes progressives have been chanting since the 60s, and drum circles don’t exactly convey a coherent message of any sort. But underneath all the “Hey-heys” and the “Ho-hos,” there is an agenda – it’s convoluted, rings of fascism, is decidedly anti-police and is downright stupid, but it is there.

As if chanting their desire for “dead cops” and actually celebrating that chant coming to fruition wasn’t bad enough, the protesters now have a list of demands.

So what do the people who couldn’t bring themselves to take a few days off of protesting so New York could bury two police officers murdered by someone sharing their sentiments and their cause want?

On New Year’s Eve these self-appointed arbiters of “justice” planned to march to Times Square and disrupt the celebration. Unfortunately for them, the shine had worn off their cause. The short attention span of those easily moved to the streets in the name of a hoax had their indoctrination trumped by their desire to party.

In addition to the natural boredom that sheds anyone from a cause, the general rudderlessness and downright nastiness of the anti-police progressives in charge has led to a hemorrhaging of members. The only remaining people willing to support a lie are the few, true believing progressives who see the lie as noble and the cause more important than truth.

When New Years Eve came around, the only people left were the core, the choir. So when it came time to define what they are about, what they’ve always been about, the rational voices left to dissent or offer temperance to the progressive radicalism that leads the movement were gone.

With the emperor naked, they put fingers to keyboard and laid out their desires. Some of the more choice demands are: (all emphasis is theirs)

“We demand that any officer found guilty of any crime or violation while on duty be imprisoned and heavily personally fined, and any union that defends that officer be heavily fined with all the money going to the victim.”

“We demand any officer that do not (sic) freely come forth and speak about abuse and corruption by fellow officers or the department that they should be aware of, be charged with conspiracy and imprisoned and heavily fined.”

(You can read all their demands and see the flier for yourself here, and I suggest you do.)

They want to remove police from the court system, denying them due process rights and setting up a “separate but equal” system of “justice” to adjudicate complaints against them. Implicit in the list is the guilt of officers being assumed, and the punishment begins almost upon charge.

This movement, whether participants knew it or not, was birthed and manipulated by the fascistic wing of the Democratic Party, the progressives who seek power through chaos and division.

They have the blessing of party leaders, having been praised by the Mayor of New York and prominent Democrats from coast to coast, and elevated to an otherwise unobtainable legitimacy through the words of the President and a White House meeting with him.

This is the baby Democrats birthed. It is the continuation of the “Occupy” movement, and when it dies completely it will find another cause in which to transmogrify itself into being the most important thing ever. The agenda – divide and conquer to empower government – is a perpetual motion machine to progressives. Truth and logic have no bearing on its march. Forward is the direction, and the destination is revealed in their own words and actions: power, government power. Government power wielded by them and intolerant of any dissent.

Those who don’t know history are doomed to repeat it; and those who seek to repeat it are, well, rarely interested in the good parts.