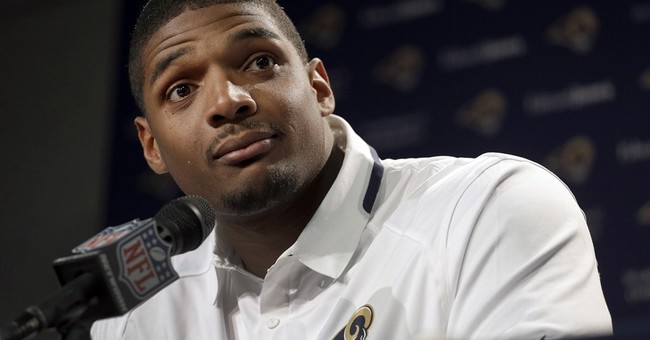 Remember the old saying, “Sticks and stones may break my bones, but names will never hurt me”? It’s meaningless now.

Sticks and stones still break your bones, but the names have become a hate crime, which now is worse than actually hitting someone with sticks, stones or just about anything else. The First Amendment protects you from government limiting the things you say, but progressives have sidestepped government to essentially render free speech irrelevant…unless you think like they do.

I’ve written before about the Outrage Industrial Complex, the industry spawned by the professional victimhood class ready to be offended on behalf of just about anyone. There’s good money in it, and there’s more money in stirring up offense in people who, in their daily lives, wouldn’t know about something “offensive” and, more importantly, wouldn’t really give a damn were they not riled up by the faux outrage wranglers.

Tony Dungy is a former NFL head coach and the first black coach to win a Super Bowl. Normally that would put Dungy on the “can not criticize list” for progressives because there are few things they love more than race, especially firsts. But Dungy is a Christian, and being a Christian leads the list of things progressives hate – government is their God, and you shall have no other Gods before government.

Dungy made the mistake of speaking honestly when asked whether he would have drafted Michael Sam, the first “openly gay” player to be drafted in the NFL. Sam’s abilities to play on the NFL level are questionable, as evidenced by the fact that he was the 7th-to-last player drafted, but his celebrity was guaranteed by his sexuality. And his celebrity was the problem for Dungy, not his sexuality.

Dungy said, “I wouldn't have taken him. Not because I don't believe Michael Sam should have a chance to play, but I wouldn't want to deal with all of it. It's not going to be totally smooth ... things will happen.” He was right, things did happen.

What Dungy was referring to clearly wasn’t Sam’s sexuality, but the media circus showered upon a first of anyone in a progressive “preferred class.” Michael Sam is just a football player, but to progressives he is an accomplishment, just not for what he’s done on the field.

Sam was an excellent college football player, but college football ain’t the NFL. Growing up in Detroit, I can tell you first-hand a lot of guys who are big stars in college, such as Andre Ware and Chuck Long, don’t necessarily pan out in the pros. There are other factors pro teams look for to see if amateur success will translate to the pros, and signing on to do a reality show about your life isn’t high on that list. Yet that’s what Sam did with Oprah’s OWN Network.

Sam put this celebrity existence ahead of his football goals. He opted for self over team before he was ever even on a team. No team would want such a distraction – certainly not from a guy drafted just six spots in front of the player they call Mr. Irrelevant.

What happens in the locker room and off the field can have a major impact on what happens on it. And what happens on it matters more than anything else to a franchise that exists to win games. The circus that will follow Sam, that already has formed around him, is partially of his own making. He embraced being a progressive celebrity over the celebrity that comes from being a professional football player.

Teammates will be asked “What’s it like playing with Michael Sam?” or “What do you think of sharing the locker room with a gay man?” Every day, they will have to say something different, fresh, but oh-so-politically correct. Players who actually have earned their notoriety on the field – you know, because they contributed to winning games – will get tired of guarding their every utterance lest it become subject to some out-of-context bastardization that gets them hauled before the cultural police. This cannot help but affect the team’s play.

Or maybe none of it will happen. Tony Dungy, who was a fine player before he went into coaching, has spent considerable time in NFL locker rooms. Maybe he’s totally wrong about how all this will shake out. But he certainly has the qualifications to make such an observation without enduring the backlash that come his way.

And to be fair, Sam didn’t start this. The progressive media did by making him a hero for simply being himself. But he did embrace it.

I don’t blame Sam for taking Oprah’s money. His playing career may not last long, and this may be the best way for him individually to make it pay. But that doesn’t mean an NFL team has to go along with it, and it doesn’t mean someone is a homophobe because they don’t want to. It means they’re thinking about winning over political correctness, which is no longer allowed in the progressives’ world.

Blowhard Mike Lupica wrote a piece entitled, “The only thing worth hearing from Tony Dungy is an apology to Michael Sam,” in which he wrote, “Whatever Dungy says about Sam and a controversy that he created, it is impossible to evaluate why he wouldn’t have wanted Sam on a football team he was coaching without putting all of this into the context of Dungy’s religious beliefs. That means his interpretation of the Bible, and an opposition to same-sex marriage that he’s decided is God’s will, as do all the other people who are as intolerant about the rights of gays as Dungy clearly is.”

It doesn’t read much different in its original German…

Lupica, and the rest of the self-important media, need to paint Dungy as a bigot because the alternative would be to acknowledge their role in creating the template that made every other team, to one degree or another, pass on drafting Sam when they had several chances to do so.

They hurt Michael Sam’s stock as a potential professional football player by elevating what isn’t an accomplishment (being gay) above Michael Sam as a player and a man. All Dungy did was point it out, and that is a curtain the progressive media cannot allow to be pulled back because it would be the end of them.

Josh Barro, juicebox journalist for the New York Times, tweeted this week, “Anti-LGBT attitudes are terrible for people in all sorts of communities. They linger and oppress, and we need to stamp them out, ruthlessly.” He wasn’t calling for people to be rounded up and placed in camps…yet. But he did follow up with, “We don't even need to change everybody's mind. Making people too embarrassed to express their anti-gay views is valuable progress.”

Right now, Barro seeks to silence any views that don’t fully embrace the “gay agenda.” But a major part of the progressive agenda is to silence all contrary opinions.

Global warming, health care, immigration reform, regulations, taxes, spending … you name it. Progressives label anyone who strays from their purity plantation as some sort of pejorative – a monster, an “other.” At this point there’s scarcely an American left progressives haven’t labeled some sort of “ist” of “phobe.”

What’s being lost in all of this is the individual. Michael Sam may end up being a great pro football player, and he may not even make the team. But whatever happens to him, thanks to the progressive media, he will not be judged by the same standards everyone else has been judged. He’s not just Michael Sam, he’s something more. But really he is just Michael Sam.

Most of us don’t care that Michael Sam is gay. We care whether he can play football. If not for the media hype, which he somewhat brought on himself, Sam would have something approximating a normal NFL experience. He’d make or not make the team. He’s start or not start. He’d play a lot or very little. But it would be based on his abilities as a player. In fact, it will be. No NFL coach is going to keep him on the roster to keep up appearances. What happens then? How much second-guessing of the coach goes on then?

This is what Tony Dungy, who is one of the most decent, respected people in sports, was talking about. It should be irrelevant, from a football sense, whether Sam is gay. He’s already accomplished a lot. He played on a division-winning team at Missouri, he was the SEC’s defensive player of the year, and he got drafted. Why can’t that be what we talk about when we discuss Michael Sam? Because Sam, the media and progressive America won’t let us.

This isn’t 1947, when Jackie Robinson broke baseball’s color barrier. Nobody is taking to the streets or wanting Sam run out of town. At this point, his coming out elicits a collective yawn, if that. But progressives won’t let him rise or fall on his own as a football player. They won’t let us truly move past discrimination and let Michael Sam be judged on the same things all other players are. They need to divide and conquer. Football teams can’t have that level of distraction and succceed. That’s all Dungy was saying.

By separating Sam the football player from Sam the man, progressives have created the very spectacle Dungy was talking about. And has been said before, you will be made to care, or be stamped out…ruthlessly.