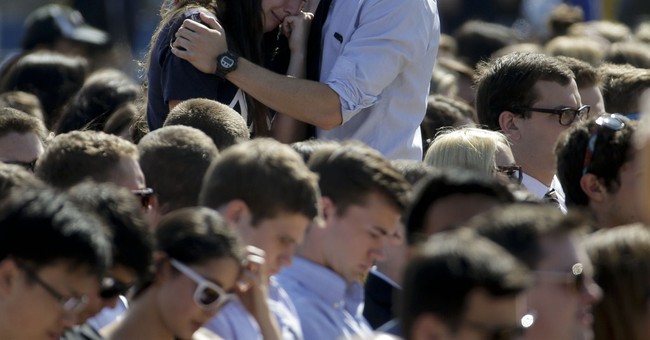 In the wake of the killing spree of Elliot Rodger, progressives are up to their old tricks. Exhibiting the “never let a good crisis go to waste” mentality for which they are known, they seek to advance their agenda on the graves of victims of a sick, evil individual. “It’s the gun’s fault!” “It’s society’s fault because society is misogynistic!” Lather, rinse, repeat. It’s the same tired song blasting from the iPods of progressives who see events of this sort not as tragedies, but as opportunities – ones they wait for with bated breath.

If I were a cynical person I might reply with a bit of dissection when it comes to their arguments, and an alternate theory that takes the accusatory finger at which they love to point toward conservatives and find it a mirror. It would go something like this…

Jessica Valenti of the Guardian wants to head the idea of individual responsability off at the pass, writing “According to his family, Rodger was seeking psychiatric treatment. But to dismiss this as a case of a lone "madman" would be a mistake.”

Why? Well, she continues, “It not only stigmatizes the mentally ill – who are much more likely to be victims of violence than perpetrators of it – but glosses over the role that misogyny and gun culture play (and just how foreseeable violence like this is) in a sexist society. After all, while it is unclear what role Rodger's reportedly poor mental health played in the alleged crime, the role of misogyny is obvious.”

Yes, the mentally ill are a high percentage of the victims of violence. But when it comes perpetrators of mass killings, they’re pretty much it. Not too many well-adjusted, friendly, functioning people committing them. It’s the equivalent of the kindergarten-level progressive claim that it’s Islamophibic to point out the fact that while very few Muslims are terrorists, most suicide bombers are believers in Islam. (Say that too loudly and Arianna Huffington’s head implodes.) It’s an inconvenient fact to progressives, who would rather spend their time drawing moral equivalence between history’s greatest monsters and the Tea Party, but their dislike of a fact doesn’t make it any less of one.

She continues, “Rodger, like most young American men, was taught that he was entitled to sex and female attention… He believed this so fully that he described women's apathy toward him as an "injustice" and a "crime".

The fact that 4 of his 6 victims were male, and the general insanity of his 107,000 word “manifesto” touched on any number of subjects aside, notice the words she put in quotation marks? Couple them with Rodger’s own words from one his YouTube videos, “College is the time when everyone experiences those things such as sex and fun and pleasure, but in those years I've had to rot in loneliness, it's not fair … I don't know why you girls aren't attracted to me but I will punish you all for it.” (Emphasis added.)

Elliot Rodger saw himself as a victim of “injustice,” of a “crime.” His life, which was one of privilege, was “not fair.” These are his words, his thoughts. Where have we heard them before?

The concept of life being unfair and the need to seek “justice” to fix it is the very heart of progressivism. Nothing is your fault, it’s society’s. You’re just a victim.

We are raising a generation of participation trophy winning, everyone is special believing, all thoughts are valid, there are no wrong answers, high self-esteem having, if it feels good do it, you can’t judge monsters. These monsters have never been told there are lines you do not cross, you don’t always get your way, someone will be better than you even at the things you are great at, and you’re going to have to bust your ass to get what you want, and then only maybe will you.

Many of the generation coming of age now are simply not equipped to deal with failure, be it in not getting a job or a date, or anything in between. They don’t know how to deal with even small failures because they’ve been insulated from reality by the progressive Lake Wobegon-esque “everyone is special” philosophy that has people looking for an explanation of their shortcomings externally.

It creates a large pool of voters for them – people seeking external relief from government for their problems and the problems of others – but it also spawns monsters ill-suited to the realities of adulthood. That some on the edge snap when faced with what used to be routine growing pains, rites of passage, should not come as a surprise.

Progressives aren’t interested in the consequences of their actions, they don’t reflect on results, all that matters is intentions. The “War on Poverty” has made poverty worse, and nearly inescapable, but they meant well. The VA provides “free health care” to veterans, just as long as they don’t have serious health issues, then they die waiting. They are spending more than every before on education because they care, but fewer and fewer children are learning the basics.

Everyone is special, above average, a perfect little snowflake just as capable of anything as everyone else is. Only we’re not. People are individuals with different skills and abilities and, most importantly, motivation. You could be the smartest person in the world, but if your plan for life involves waiting tables until someone comes along, recognizes that fact and offers to pay you a lot of money to simply be brilliant, you’re going to be an old waiter.

Life is as much what you do as it is what happens to you. To think otherwise, to be taught otherwise, is a disservice to humanity. It’s also very progressive.

That’s what I would point out to those looking to advance a political agenda on the graves of the 6 victims of Elliot Rodger. Rodger was, after all, a fan of the progressives politics of MSNBC rejects The Young Turks.

Of course, I would only point any of this out if I were cynical