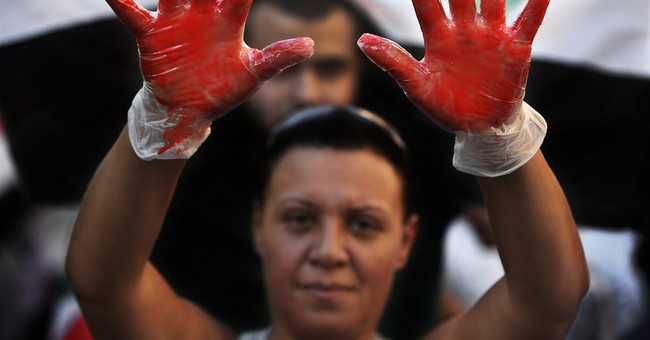 During World War II, the United States produced a series of propaganda films called “Why We Fight” explaining why we were fighting and what we were fighting for. They were propaganda, but it was the government keeping the public informed and supportive of the war effort at home and abroad. It was a time when communication was much slower and far more limited, but there was communication. Today, not so much.

As we march off to a possible war with Syria, or a bombing, or a kinetic military action, or whatever the official White House “re-worders” pull from the thesaurus to describe it, we are still left to wonder why.

President Obama’s love of the trappings of the job of president have been well documented, and his distaste for the actual work that goes with it also has gotten its share of ink. But that distaste never has been much of an issue before. In the case of Syria it is.

Previously in times of conflict, presidents either aggressively sought and got congressional and public approval for military action (H.W. & W. Bush), or they acted quickly, then explained after the fact (Reagan, Clinton). The former strategy is the norm for longer conflicts and the latter for shorter or one-time actions. Where Syria falls on this scale remains to be seen.

In Libya, President Obama didn’t seek congressional approval; he just acted. But instead of the “short-term” action category we were told to expect – “days, not weeks, remember – it lasted months and cost billions.

Originally, President Obama was set to act on his own on Syria too – a quick slap across the face of the regime for using chemical weapons – but then, inexplicably, the man who loves being president but isn’t a fan of the presidency got cold feet. And the reason remains a mystery.

When President Reagan attacked Libya to punish Muammar Gaddafi for the bombing of a German disco that killed an American soldier, the nation knew something was going to happen – we just didn’t know what or when. We were told the “what” when it had happened. That allowed for the element of surprise, which nearly killed Gaddafi. That was leadership.

We know the “why” of Syria, but President Obama’s fecklessness have left the what and when muddled. Had the president launched a quick, punitive attack within a day or two of learning of the chemical attack, a national address saying basically, “Hey, I warned them beforehand. They used them, so we hit them,” would have sufficed.

The autopsy of that action would have elicited some “How dare he!” cries, but not many. And they wouldn’t have mattered since it would’ve been over.

As it stands now, the president’s false starts, his statements of determination followed by nothing, the urgency with which he sold this before he suddenly hit the brakes last week gave the public an unforgivable mixed message.

Assad is a monster; no one disputes that. And had the president acted immediately it would have been seen as just that – hitting a deserving monster for unspeakable evil. But he didn’t. Instead, he said he was able to act alone, was willing to act alone and was going to act alone…then turned to Congress to ask them to come along with him as he acted alone.

Only Members of Congress not only began to wonder why we had to act, they asked the $64,000 question: How is it in the interest of the United States to act? A question the Obama administration was dangerously unprepared to answer.

He is the president. It’s his job to determine if this is in the national interest. He can explain later to preserve the element of surprise. His pathetic navel-gazing has provided Assad time to hide his most important assets. He not only telegraphed our punch, he gave the public time to ask the not-insignificant question: “Who does this help?”

The videos of rebels reading bloodthirsty poems and summarily executing Syrian soldiers don’t help. They tell us, that, contrary to the assurances of Sen. John McCain, R-Ariz., many of those who would take over for Assad hate us and Israel as much as he does. A quick strike would have hurt Assad without necessarily helping the rebels. Now, what should have been a surprise slap of an evil man for a despicable act will become the greatest gift a losing rebellion could receive – a blow against its enemies it never could have delivered.

That’s where the president lost the public and Congress.

And, of course, all of this is predicated on the assumption it was indeed Assad’s government that used these chemical weapons. He’s evil … maybe even crazy. But no one maintains power that long being stupid. He was winning the civil war. Why, with the wind at his back, would he use the only weapons he had that would draw that kind of ire? And why, if he did decide to poke the rest of the world in this way, would he choose to bomb civilians rather than military targets? Evil enough? Certainly. Stupid enough? Doubtful.

The rebels, divided into squabbling factions, infiltrated with Islamic radicals and losing, had an incentive to use them on civilians (and, curiously soon after the attack, film it). What better way to re-engage an indifferent world in the task of toppling Assad than to launch such an attack in such a way that he could be blamed?

We don’t know the truth; we just know what we’ve been told, which is that officials in the Obama administration know beyond doubt it was Assad and we should trust them. They still can’t figure out who ordered all those guns given to Mexican drug cartels in Fast and Furious. They can’t find the person responsible for ordering the IRS to target political opponents. They have no explanation beyond “what difference does it make?” for why no help was sent to Americans in Benghazi who endured an 8-hour attack. But they know this. They know who ordered an attack in a country halfway around the world in which our intelligence assets are, to say the least, limited.

Being as polite at possible – it doesn’t pass the smell test.

To act now would not be an international rebuke of the use of chemical weapons. Instead, it would be a face-saving act to cover for an incompetent president who, when he had a chance to lead, punted at the last minute and went golfing. Even Democrats, to their credit, can’t bring themselves to support that.

Whether any of this matters to the president, well … that’s why we wait.