If Your Child Came Home From College a Leftist...

Dennis Prager
|
Posted: Mar 12, 2019 12:01 AM
Share   Tweet
The opinions expressed by columnists are their own and do not necessarily represent the views of Townhall.com. 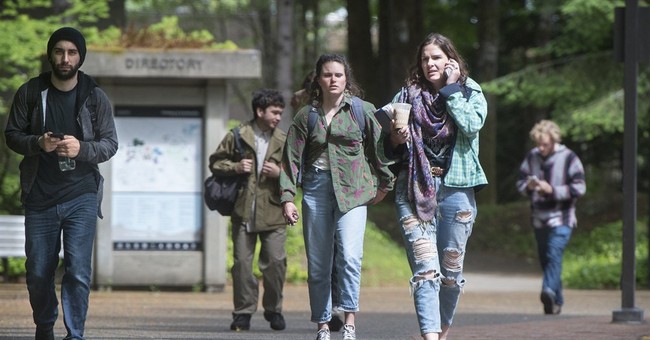 Every year, many thousands of American parents find that the son or daughter they sent to college has been transformed by college into a leftist. For left-wing parents, this may be a blessing, but for parents who are not leftist -- not to mention conservative -- it is often painfully jolting.

It is jolting because their beloved child now holds America in contempt; prefers socialism to capitalism; regards all white people and police as racist; believes the Bible, Christianity and Judaism are not only nonsense, but dangerous nonsense; no longer believes men and women are inherently different -- or even that male and female objectively exist; is disinterested in getting married and having children; believes the president of the United States is a fascist -- as are all those who voted for him; and supports the suppression of speech that he or she regards as "hate speech."

While this is music to the ears of left-wing parents, most traditionally liberal parents will not be all that happy with this transformation. Unlike leftists, most liberals do love America and think that, despite its flaws, it is worthy of respect. They do not believe male and female are subjective categories, and they believe in free speech -- even for "hate speech."

For conservative parents, the transformation is far worse. "Nightmare" is not too strong a description. Not only does their child hold everything they cherish in contempt, their child, who loved and respected them a year or two before, now holds them in contempt.

It is a nightmare for another reason: Young people who are transformed into leftists almost always become less kind, less happy and more angry.

It's hard to imagine the opposite could occur -- that is, that a young person could buy into all the left-wing views described above and become a sweeter human being.

It is a sad rule of life that whatever the left touches, it ruins; music, art, literature, religion, late-night TV, the Academy Awards, sports, economies, the family structure, the Boy Scouts and race relations are just a few examples. It also ruins people -- their character and their happiness.

How could it not?

Every parent whose child came home from college (or, increasingly, high school) a leftist should be asked: "Is your daughter or son happier as a result of becoming a leftist? Is he or she kinder? More tolerant? More respectful?"

So it is not only institutions that the left ruins, but also the character of its adherents. Where are the prominent conservative equivalents of Robert De Niro shouting "F--- Trump" at awards ceremonies? Of Sarah Silverman tweeting to the president of the United States: "I'm just gonna go with F--- YOU, and also add that you are a smelly penis hole with balls that touch water. Eat s---, you greedy t---"? Of Rep. Rashida Tlaib telling supporters, among whom were children, "We're gonna impeach the motherf---er"?

Every American should watch how a group of 10-year-old girls recently treated 85-year-old California Sen. Dianne Feinstein. Being indoctrinated into leftism apparently permitted them to treat a U.S. senator, not to mention a woman 75 years older than them, with contempt.

It is inconceivable that a group of 10-year-old conservative kids, accompanied by their teachers, would ever treat an 85-year-old, senator or not, so condescendingly.

When you send your child to college, you are not only playing Russian roulette with their values. You are playing Russian roulette with their character and the way they will treat you. Left-wing parents do not have a similar worry. If their child somehow returns home from college a Christian or a religious Jew, not only will they not be treated with contempt, they will probably be treated with even more respect than before. Leftism makes you worse. Judeo-Christian religions make you better. That might not be the fashionable view, but it just happens to be true.