Dennis Prager
|
Posted: Feb 12, 2019 12:01 AM
Share   Tweet
The opinions expressed by columnists are their own and do not necessarily represent the views of Townhall.com. 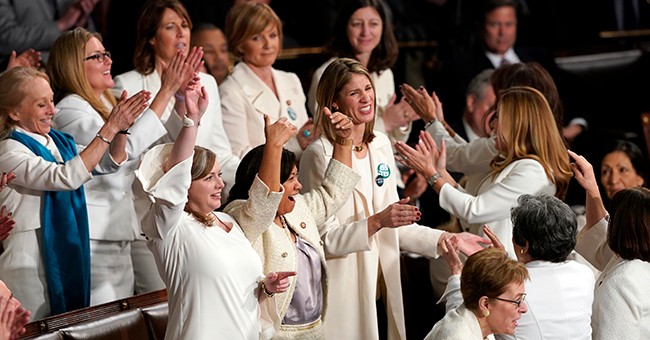 In his State of the Union address, President Trump announced, "All Americans can be proud that we have more women in the workforce than ever before." It was one of the few times he received a standing ovation from both Democrats and Republicans.

I would not have stood and cheered.

Either the president or whoever wrote that line honestly thought it was something worth celebrating, or the president simply wanted to say something that would sound wonderful to both Democrats and Republicans, as well as to Americans who do not otherwise support him.

Whatever the reason, both the fact that there are more women in the workforce than ever before and the fact that Trump thought mentioning it would bring credit to his administration constitute a victory for the feminist left. Getting women to leave home for the workplace has been one of the central goals of modern feminism.

Feminists deny this, claiming they don't prefer women work outside the home; they only want women to have the choice to do so. But if that were true, why did congressional Democrats -- the women in white, feminists all -- jump up and cheer?

The answer is obvious: Feminists consider women who eschew a career to take care of their home, their children and their husband to be less than women who place career first.

But even if one prefers that women work outside of the home, "All Americans can be proud that we have more women in the workforce than ever before" is simply not true. As feminists often note, many women work outside of the home not because they want to but because they have no choice: They have to support themselves, their household and/or their children.

Why should we be proud of that?

What if every woman in America were in the workforce? Would we be proud of that? By the "more of women than ever" logic, we should be.

On the other hand, if the president had said, "All Americans can be proud of the fact that more women than ever now have the choice to work inside or outside the home," that would be true. That is something I, too, would have cheered.

We know why Democrats did: They want women to eschew homemaking and time with children in favor of work outside the house.

But why did Republicans stand up and cheer?

One reason bears testimony to the thesis of a recent column I wrote: The greatest fear in America is fear of the left. The last thing Republican members of Congress wanted was to be photographed sitting quietly after the president of the United States announced, "All Americans can be proud that we have more women in the workforce than ever before"-- especially while every Democrat was standing and cheering. The left-wing media, meaning virtually all mainstream media, would have depicted every such Republican "sexist" and "misogynist."

A second reason bears testimony to another fact of contemporary life: Republicans have been far more influenced by leftism than Democrats have been by conservatism. While many of the Republicans who cheered did so out of fear of the left and/or to support their party's beleaguered president, many sincerely believe the record number of women in the workplace is something worth celebrating.

But believe it or not, there are still many women and men who do not agree. We all acknowledge that with enough money and/or familial support, a woman can raise fine children and maintain a happy home and a loving marriage. Nevertheless, we also know that doing all three is difficult enough when a woman devotes full time to those three goals. But when a woman works outside the home, devoting full time to home and family is impossible.

So, yes, more women than ever are in the workplace. But before we stand and cheer, it is worth asking:

Are marriages happier with wives at home or in the workplace?

Is society's emphasis on work and career inhibiting more young women from marrying and having children?

Is society better off or worse off when a record number of women leave home to enter the workplace?

Only when those questions are answered will we know whether to cheer.