Why Is There a War on Cheerleaders?

Dennis Prager
|
Posted: Jan 29, 2019 12:01 AM
Share   Tweet
The opinions expressed by columnists are their own and do not necessarily represent the views of Townhall.com. 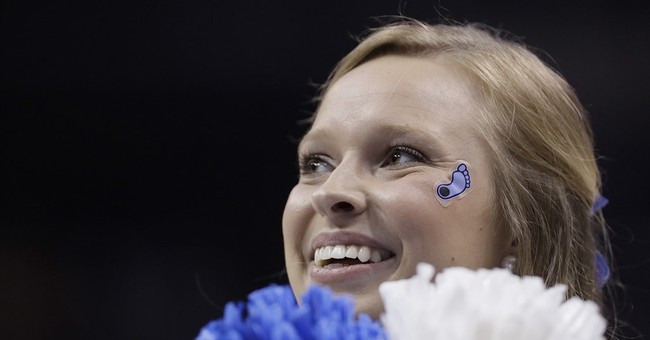 If I were to tell you that a growing group of killjoys wants to ban NFL cheerleading, would you guess that this group is on the political left or right?

Must be the right, right? They're the religious ones with all the sexual hang-ups.

They're on the left.

And what's their problem with cheerleading?

I'll let them speak for themselves.

In The Boston Globe, Margery Eagan, Globe columnist and co-host of NPR's "Boston Public Radio," wrote a column titled "It's time to say goodbye to the NFL cheerleaders." She described NFL cheerleading as "creepy and demeaning."

Chicago Tribune sports reporter Shannon Ryan wrote, "The league has shown only that it regards cheerleaders as pieces of sideline eye candy." To make her point, she asked, "why aren't there scantily dressed male cheerleaders and dance teams?"

Only the well-educated could ask such a stupid question -- because only the highly educated deny that, with few exceptions, the only people who would like to see scantily dressed male cheerleaders are gay men.

In USA Today, Yale Divinity School Director of Communications Tom Krattenmaker added a theological voice to the anti-cheerleader chorus. "It's time," he intoned, "to call this out for what it is: demeaning to women and an anachronism that ought to be beneath the male fans to whom this titillating eye candy is served." This sentence, and his whole piece, is what goes for deep thought on the left today. He doesn't explain how being an NFL cheerleader is "demeaning." He simply declares it so. Did he bother to interview any cheerleaders? I did, and the consensus among cheerleaders is that it is one of their greatest life experiences.

Jacie Scott, a black woman who retired from being a Dallas Cowboys cheerleader in 2016, wrote in response to Nancy Armour: "I spent four years as a cheerleader in the NFL, and the experiences that each year brought helped shape me into the woman I am today. ... I saw countries I never imagined seeing. I made a positive impact in lives, young and old, and I did it all with 30-something incredible women. I wouldn't trade my time as a cheerleader for anything."

What is demeaning to cheerleaders is not cheerleading but people like Tom Krattenmaker, Shannon Ryan, Margery Eagan and Nancy Armour who have the conceit -- and meanness -- to label these women demeaned.

I interviewed a former Atlanta Falcons cheerleader, Nina Ahlin (now Noa Hami), on my radio show. When she entered my studio, I was struck by how attractive she was 20 years after retiring from cheerleading, and by her modest dress. Regarding her dress, she explained that soon after retiring as a cheerleader, she met an Orthodox Jewish man, fell in love, converted to Orthodox Judaism and married.

Apparently, her religious husband, a successful businessman, didn't find this woman's cheerleading background "demeaning." On the contrary, like the vast majority of men -- religious or secular -- he was delighted to be dating and ultimately marrying an NFL cheerleader. Good thing he didn't go to Yale Divinity School.

It was clear that even now, as an Orthodox Jew who dresses in the long skirts and long sleeves, she doesn't find cheerleading demeaning: She sent me a photo of herself from her cheerleader days.

As she wrote to me: "I can't imagine my life without having the experience I did as an NFL cheerleader. It was literally life changing for me. The friendships I made, the places we were able to go and the people we were able to meet can't be duplicated. ... The thought of that being taken away from young girls who dream of one day becoming a pro cheerleader scares me!"

Why do leftists have contempt for cheerleading and cheerleaders (who, after all, choose to be cheerleaders -- and for virtually no pay)?

A Vanity Fair piece on cheerleaders gave the game away: "The league profits from selling a retrograde notion of masculinity -- big, strong men, unafraid to take a hit, surrounded by enthusiastic, scantily clad women."

The left has contempt for masculinity and the male sexual nature that is part of it. The new emasculated man will not look at sexy women. And the new defeminized woman will not want to "support men," let alone appear sexy for them.

The left claims to be pro-choice. But it demands the abolition of NFL (and NBA) cheerleading without giving women a choice to be cheerleaders -- just as it never gave Miss America participants a choice when it abolished the Miss America swimsuit competition. Leftists believe they are morally superior people and, therefore, have the right to deprive anyone -- man or woman -- from choosing what the left disdains. The only woman's choice the left cares about is the choice to extinguish nascent human life.

Even if you have no interest in football or cheerleading, this should be your issue. We have to tell the left here, as in virtually every other area of life, and in the most forceful terms possible: Just leave us alone. Let us live our lives with our small joys. And grow up -- men like looking at women, and women like being looked at.

A world with NFL cheerleaders is far preferable to the world the left wants to create: a dystopia in which men and women are interchangeable.