Dennis Prager
|
Posted: Oct 02, 2018 12:01 AM
Share   Tweet
The opinions expressed by columnists are their own and do not necessarily represent the views of Townhall.com. 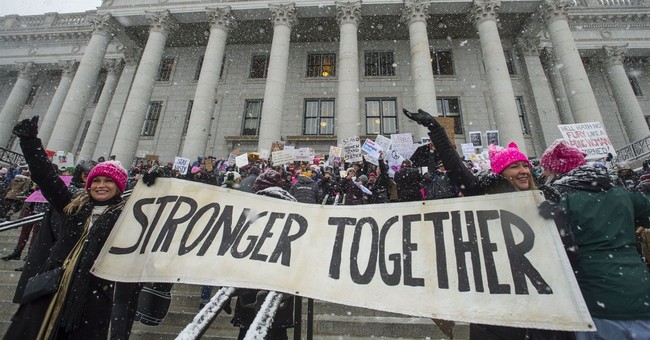 When I was in graduate school, I learned a lot about the left. One lesson was that while most liberals and conservatives abide by society's rules of order and decency, most leftists do not feel bound to live by these same rules.

I watched the way leftist Vietnam War protesters treated fellow students and professors. I watched left-wing students make "nonnegotiable demands" of college administrations. I saw the Black Panthers engage in violence – including torture and murder – and be financially rewarded by leftists.

Today, we watch leftist mobs scream profanities at professors and deans, and shut down conservative and pro-Israel speakers at colleges. We routinely witness left-wing protesters block highways and bridges; scream in front of the homes of conservative business and political leaders; and surround conservatives' tables at restaurants while shouting and chanting at them.

Why do leftists feel entitled do all these things? Because they have thoroughly rejected middle-class, bourgeois and Judeo-Christian religious values. Leftists are the only source of their values. Leftists not only believe they know what is right – conservatives, too, believe they are right – but they also believe they are morally superior to all others. Leftists are Ubermenschen – people on such a high moral plane that they do not consider themselves bound by the normal conventions of civics and decency. Leftists don't need such guidelines; only the non-left – the "deplorables" – need them.

In August 2017, University of Pennsylvania law professor Amy Wax wrote a column for the Philadelphia Inquirer in defense of middle-class values. She and her co-author cited a list of behavioral norms that, as Wax, put it, "was almost universally endorsed between the end of World War II and the mid-1960s."

They were: "Get married before you have children and strive to stay married for their sake. Get the education you need for gainful employment, work hard, and avoid idleness. Go the extra mile for your employer or client. Be a patriot, ready to serve the country. Be neighborly, civic-minded, and charitable. Avoid coarse language in public. Be respectful of authority. Eschew substance abuse and crime."

She later wrote in the Wall Street Journal, "The fact that the 'bourgeois culture' these norms embodied has broken down since the 1960s largely explains today's social pathologies – and re-embracing that culture would go a long way toward addressing those pathologies."

For her left-wing colleagues at Penn Law School, this list was beyond the pale. About half of her fellow professors of law – 33 of them – condemned her in an open letter. And Wax wrote in the Journal, "My law school dean recently asked me to take a leave of absence next year and to cease teaching a mandatory first-year course."

The Pennsylvania chapter of the left-wing National Lawyers Guild condemned her for espousing bourgeois values and questioned "whether it is appropriate for her to continue to teach a required first-year course."

As regards traditional Jewish and Christian codes of conduct, just read the left's contempt for Vice President Mike Pence's religiosity. They fear him more than President Trump solely for that reason. One would think that leftists, as sensitive as they are to sexual harassment of women, would admire Pence's career-long policy of never dining alone with a woman other than his wife. On the contrary, they mock him for it.

With such high self-esteem and no middle-class, bourgeois or Judeo-Christian values to guide them, many leftists are particularly vicious people.

The opening skit of "Saturday Night Live" this past weekend – Matt Damon's mockery of Judge Brett Kavanaugh – provided a timely example. It is unimaginable that a prominent conservative group or individual would feature a skit mocking Kavanaugh's accuser Dr. Christine Blasey Ford. Indeed, Kavanaugh noted his 10-year-old daughter's prayer for his accuser, and a political cartoonist promptly drew a cartoon with her praying that God forgive her "angry, lying, alcoholic father for sexually assaulting Dr. Ford."

Is there an equally prominent conservative public figure on the right who has ever said "F--- Obama!" on national television just as Robert De Niro shouted, "F--- Trump!" at the recent Tony Awards?

Now, why would De Niro feel he could shout an obscenity at the president of the United States with millions of young people watching him? Because he is not constrained by middle-class or Judeo-Christian moral values. In Nietzsche's famous words, De Niro, like other leftists, is "beyond good and evil," as Americans understood those terms until the 1960s.

In 2016, at a Comedy Central roast of actor Rob Lowe, the butt of the jokes was Ann Coulter, not Lowe. They mostly mocked her looks, and if there is something crueler than publicly mocking a woman's looks, it's hard to identify. For example, "Saturday Night Live" cast member Pete Davidson said, "Ann Coulter, if you're here, who's scaring the crows away from our crops?"

There surely are mean conservatives – witness some of the vile comments by anonymous conservative commenters on the internet. And it is a moral scandal that Ford has received death threats. The difference in left-wing meanness is the meanness of known –- not anonymous – people on the left. They don't hide behind anonymity because they do not feel bound by traditional notions of civility, for which they have contempt.

Now you can understand why the left hates Mike Pence, a man who has, by all accounts, led a thoroughly honorable life. He – and other evangelical Christians and Orthodox Jews – tries to live by a code that is higher than him.

That ethic is what Ubermenschen seek to destroy.