The Left's Tactics -- a Personal Example 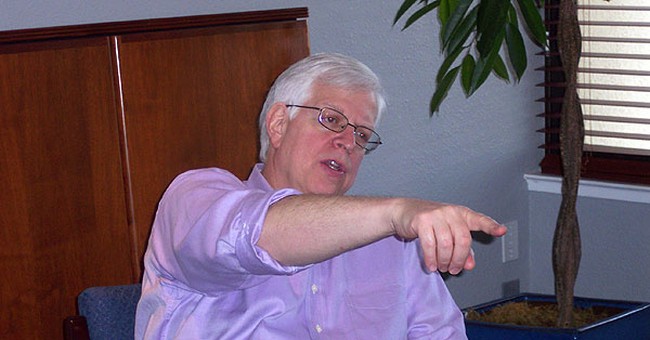 Trending
Last week, I was a speaker and the emcee at a rally convened by the Republican Party and WLSS, the Sarasota station that carries my radio show. The other speakers were Louisiana Governor Bobby Jindal, Carly Fiorina, former CEO of Hewlett-Packard, and Ralph Reed, founder of the Faith and Freedom Coalition.

I spoke for about 25 minutes, about two minutes of which drew national attention from the left. I spoke about "the divisions that the Democrats have engaged in making in this country." Then I said, word for word:

"On issue after issue, these are manufactured divisions: the black-white division, the male-female division, and the old-young division. These are all manufactured. There is no 'war on women.' It's absurd. It is just an absurdity. It is a lie. It's a gargantuan lie to get votes. It's as big a lie as 'culture of rape' on your campuses. What nonsense. There is a 'culture of rape' on campuses run by the feminist left? Why are you trying to sell me this nonsense?

"One in five women are sexually assaulted on campuses? You know what sexual assault means? Did you ever look at what counts? An 'unwanted kiss' is considered sexual assault. I'm stunned it's only one in five. Four out of five women have not gotten an unwanted kiss? My wife gets unwanted kisses every so often! [The latter remark was nothing more than self-deprecating humor. It was attacked as literal by many on the left, who read, but did not hear, the talk and who would have regarded it as charming humor if a man they liked had made the same quip.]

These comments made headlines on just about every major and, presumably, minor left-wing website.

The HuffingtonPost headlined "Conservative Pundit Dennis Prager Says College Sexual Assaults Are Lies To Get Votes." It noted, among other criticisms, that "Prager's comments contradict several studies that show that sexual assaults on college campuses are significantly underreported. A recent Massachusetts Institute of Technology survey found that women students failed to report sexual assault because they did not realize behavior they had been subjected to fell within its definition."

It is difficult to overstate the incoherence of that MIT report. First, how significant, let alone injurious, is behavior that people never considered an "assault?"

Second, the report asserts that "12 percent of female undergrads reported experiencing 'unwanted sexual behaviors' that did not involve use of force, physical threat or incapacitation."

What could such behavior be? If there is no force, no threat, and no incapacitation, how can a behavior constitute an "assault?" Presumably only if "assault" includes being asked out on a date too often or being looked at in a sexual manner. That's how the left comes up with the charge of a "rape culture" permeating our universities.

The comments at HuffingtonPost did not speak well for the website. Virtually everyone was a vile attack on me, including this one by a man who gave the name Gregory Crawford:

"Prager should be castrated."

But the HuffingtonPost piece was downright civil compared to the rest of the left.

"Without rape, 80 percent of Republican men would die virgins."

"Whores don't like kissing either. Where did he meet his wife?"

"I hope his wife drinks a lot."

"That conservatives feel obligated to defend rapists is all you need to know about that party."

Here is the subhead on Salon, one the biggest of the left-wing websites:

I bet she [my wife] gets raped every so often as well."

First, truth is a not a left-wing value (though, of course, some individuals on the left have great integrity). If you don't know that, you cannot understand the left. Truth is a conservative value (though, of course, some individuals on the right lie). From the Bolsheviks to today's left-wing, lying is normal. Not one left-wing comment or article (except for the HuffingtonPost reference to the MIT report) even dealt with the issue of the truth of the claim that one out of every five female college students is sexually assaulted/raped, or the truth of the charge that our universities are a "culture of rape."

Second, mockery, indeed cruel mockery, is the norm on the left. I urge readers to visit any of the liberal websites cited and read the comments after the articles. No significant American group hates like the left does. If you differ with them -- from global warming, to race relations, to same-sex marriage, to the extent of rape on college campuses -- they will humiliate, defame, libel and try to economically crush you.

Finally, a sad coda. The head of the Sarasota Republican Party sided with the hysterical reactions and dissociated the Republican Party from my remarks. The hysterics of the left regularly lead to Republican surrender. He should have said something like, "What exactly did Prager say that was wrong? The Democratic Party owes women and America an apology for trivializing rape, for libeling our universities, and for dividing Americans by gender. Sexual assault matters a great deal. And so does truth, Democrats."

Is the left's charge that the universities embody a "rape culture" true?

U of Michigan Professor