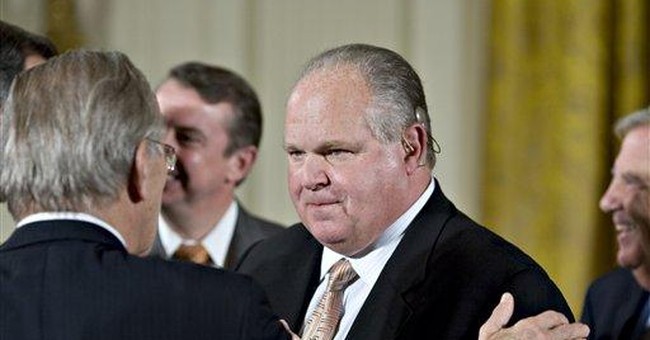 The most common left-wing objection to the right is that it wants to control others' lives. But, both in America and elsewhere, the threat to personal liberty has emanated far more from the left.

In the past generation, the left has controlled so much speech and behavior that these controls are now assumed to be a normal part of life.

Through the use of public opprobrium, laws and lawsuits, Americans today are less free than at any time since the abolition of slavery (with the obvious exception of blacks under Jim Crow).

Public opprobrium is known as political correctness, and it has suppressed saying anything -- no matter how true and no matter how innocent -- that offends left-wing sensibilities.

Honest discussion of male-female differences is also largely gone -- a lesson the former president of Harvard Larry Summers painfully learned when he simply asked if fewer women succeed in math and science because of innate differences between men and women.

Discussion of disproportionate rates of black violence is not allowed, no matter how well intentioned -- unless it is to "prove" how racist America is because of the high number of black men in prison.

In Europe -- and in all likelihood coming to America -- Christians who, citing the Bible, argue for a heterosexual ideal are arrested.

Thanks to the left, students at colleges get speech codes. They learn early in life that much speech is not permitted.

One may not favorably compare Western or American culture with that of any other. Led by Jesse Jackson, leftists chanted, "Hey, hey, ho, ho, Western Civ has got to go" at Stanford University. And away it went.

The left owns the language. Married women are not to be referred to as "Mrs." but as "Ms." And the words "lady," "feminine" and "masculine" have largely gone to their graves. High school and college teams with American Indian names must drop those names because by definition, according to the left, they offend American Indians.

(This last example has always perplexed me. Why does the name Florida State Seminoles offend Indians? One caller to my radio show once responded to that question by asking me how I would feel as a Jew if some team took the name "Jews." I told him that I would be thrilled. For nearly 4,000 years, Jews have been looking for fans.)

A woman may reveal as much of her body as she wishes. But if a man is perceived by a woman as looking too long at what she reveals, or if he comments on what she reveals, he may be fired from his job and/or sued for "sexual harassment." A woman may wear a miniskirt and crop-top, but a man may not have a calendar of women wearing miniskirts and crop-tops on his desk at work. That constitutes sexual harassment and a "hostile work environment."

Graphic torture and frontal nudity may be shown on screen, but smoking cigars or cigarettes may not. A Churchill museum in London has removed the cigars from wartime Churchill photographs, FDR has had his ubiquitous cigarette holder removed from his photographs, and the cigarettes have been removed from the Beatles' hands in the famous photo of them crossing Abbey Road.

The list of forbidden words and behaviors due to Leftist activism is quite extensive.

The latest example is the left's war on any words or imagery that come from the worlds of war or guns.

Already, "crusade" has been removed from Americans' vocabulary -- lest it offend Muslims. Overnight, the left effectively banned the use of a perfectly legitimate word that usually described an admirable preoccupation with doing good -- "that newspaper is on an anti-corruption crusade."

Now, the left has announced that words such as "target" and "cross hairs" are offensive -- on the idiotic pretense that such imagery causes people to murder. If I were the CEO of Target stores, I would be concerned -- will my company be sued because of its name and logo?

Will the word "war" be next? Perhaps "war on poverty" caused murder. And how about "war on cancer" -- only God knows how much killing that caused. Perhaps we should now say "project to eliminate cancer." But, then again, doesn't "eliminate" have genocidal overtones?

It was understandable but mistaken for Sarah Palin to take down her map of congressional districts in cross hairs. There was absolutely nothing wrong with that map. Only the totalitarian left argues that it caused the murders in Tucson or anywhere else.

So what's the answer?

If you love liberty, you must target the left and put its totalitarian tendencies in your cross hairs. We must shoot down political correctness and wage a crusade for truth and liberty. All those ladies and gentlemen who cherish personal and societal freedom must fight like great Indian chiefs, braving secondhand smoke if need be, in affirming a masculinity that has been under relentless attack. And yes, we must even endure the taunts of our foes and, at the appropriate time of the year, wish fellow Americans a "Merry Christmas."

Then, and only then, will we be able to vanquish lies, defeat the foes of liberty, and once again be able to proudly sing a national anthem that affirms that "the bombs bursting in air gave proof through the night that our flag was still there."

If we don't, that line in "The Star-Spangled Banner" will go the way of "Merry Christmas."