Obama Is in Russia, but Honduras Is Where the Action Is 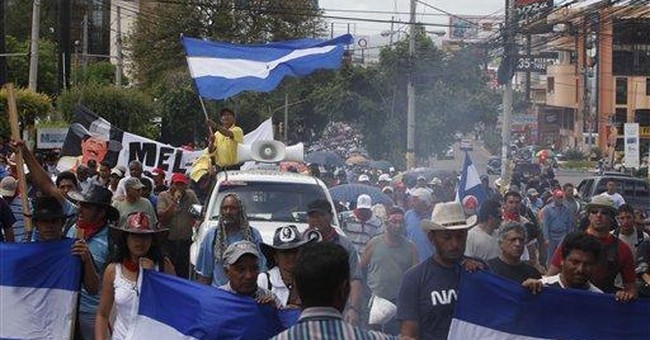 The importance of the summit meeting in Moscow between President Barack Obama and Russian President Dmitry Medvedev pales in comparison to the events taking place in Honduras.

Whether or not the United States and Russia reduce their nuclear arsenals is ultimately meaningless. But whether Hugo Chavez and Raul Castro are victorious in Honduras or whether the movement toward left-wing authoritarianism is finally defeated in a Latin American country is extremely significant.

The courage of the pro-liberty forces in Honduras is almost miraculous. It is almost too good to be true, given Honduras' consequent isolation in the world.

Even if you know little or nothing about the crisis in Honduras, nearly all you need to know in order to ascertain which side is morally right is this: Venezuela's Hugo Chavez, Nicaragua's Daniel Ortega, Cuba's Castro brothers, the United Nations, and the Organization of American States are all lined up against Honduras.

And what troubles these good people? They claim that there was a military coup in Honduras that renders the present government illegal.

Here, in brief, are the facts. You decide.

The president of Honduras, Jose Manuel Zelaya, a protege of Hugo Chavez, decided that he wanted to be able to be president for more than his one term that ends this coming January -- perhaps for life. However, because the histories of Honduras and Latin America are replete with authoritarians and dictators, Honduras's constitution absolutely forbids anyone from governing that country for more than one term.

As Mary Anastasia O'Grady, who writes The Americas column in the Wall Street Journal, explains: "A constituent assembly can only be called through a national referendum approved by its Congress. But Mr. Zelaya declared the vote on his own and had Mr. Chavez ship him the necessary ballots from Venezuela."

The Honduras Supreme Court ruled Zelaya's nonbinding referendum unconstitutional, and then instructed the military not to implement the vote as it normally does. When the head of the armed forces obeyed the legal authority, the Honduran Supreme Court, rather than President Zelaya, the president fired him and personally led a mob to storm the military base where the Venezuela-made ballots were being safeguarded.

As Jorge Hernandez Alcerro, former Honduran ambassador to the United States, wrote, "Mr. Zelaya and small segments of the population tried to write a new constitution, change the democratic system and seek his re-election, which is prohibited by the constitution."

In order to stop this attempt to subvert the Honduran constitution, while keeping Honduras under the rule of law and preventing a Chavez-like dictatorship from developing in its country, the Honduran Supreme Court ordered the military to arrest Zelaya. They did so and expelled him to neighboring Costa Rica to prevent certain violence.

Was this a "military coup" as we understand the term? Columnist Mona Charen answered this best: "There was an attempted coup in Honduras, but it was Zelaya who initiated it, not his opponents."

Or, to put in another way: When did a military coup ever take place that was ordered by that country's supreme court, that was supported by the political party of the president who was overthrown, in which not one person was injured, let alone killed, and which replaced the ousted the president with the president of the country's congress, a member of the same party as the ousted president?

But none of this matters to the United Nations, which never met a left-wing tyrant it didn't find appealing. That is why the president of the U.N. General Assembly, a former Sandinista foreign minister, Miguel d'Escoto Brockmann, accompanied Zelaya in the airplane on Zelaya's first attempt to return to Honduras on July 5. (Brockmann, among his other radical moral positions, is so virulently anti-Israel that the Israeli Ambassador to the United Nations threatened not to attend the U.N. Holocaust Memorial Day event if Brockmann showed up.)

And none of this matters to the OAS, which just lifted its ban on Cuba's membership and which says nothing about Chavez's shutting down of Venezuela's opposition radio and television stations.

And none of this matters to the world's left-wing media. Thus, on July 1, a writer for the United Kingdom newspaper The Guardian penned this insight: "There is no excuse for this coup. … The battle between Zelaya and his opponents pits a reform president who is supported by labor unions and social organizations against a Mafia-like, drug-ridden, corrupt political elite." To the Guardian writer, Zelaya was a "reform president." Lenin's useful idiots never die out.

And the Los Angeles Times editorial page wrote: "Even though the Honduran Congress and military may believe they are defending the country against a would-be dictator, the ends don't justify the means."

Quite a great deal of foolishness in one sentence. That the Los Angeles Times does not believe that Zelaya is a would-be dictator is mind-numbing. As for the cliche that "the ends don't justify the means," in fact they quite often do. That is one of the ways in which we measure means. One assumes that while the Los Angeles Times believes that Americans should be law-abiding, it agrees with Rosa Parks having broken the law. The ends (fighting segregation) justified the means (breaking the law).

If Honduras is hung out to dry, if America suspends trade and economic aid, the forces arrayed against liberty in Latin America will have won a major victory. On the other hand, if Honduras is not abandoned now, those Iran-supporting, America-hating, liberty-loathing forces will have suffered a major defeat.

Even members of the Obama administration recognize this. As quoted in the Washington Post, Jeffrey Davidow, a retired U.S. ambassador who served as President Obama's special adviser for the recent Summit of the Americas, said:

"The threats against democracy in Latin America … are not those coming from military coups, but rather from governments which are ignoring checks and balances, overriding other elements of government."

Let your representatives in Congress know that America needs to stand with liberty, not with Castro, Ortega, Zelaya, Chavez, the OAS, and the U.N. And buy Honduran goods. I am smoking a terrific Honduran cigar as I write these words: God bless Honduras.