Opposition to California Proposition 8: Hate in the Name of Love 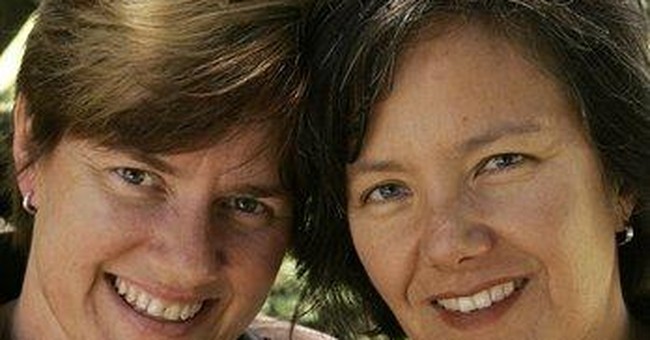 Next to the presidential election, California Proposition 8 is the most important vote in America.

In 2000, 61 percent of the voters in California, one the most liberal states in America, voted to retain the only definition of marriage civilization has ever had -- the union of a man and woman (the number of spouses allowed has changed over time but never the sexes of the spouses). But in May 2008, four out of seven California justices decided that they would use their power to make a new definition: Gender will now be irrelevant to marriage.

As a result of this judicial act, the only way to ensure that we continue to define marriage the way every religious and secular society in recorded history has defined marriage -- as between men and women -- is to amend the California Constitution. It is the only way to prevent the vote of one judge from redefining marriage, as was also done in Massachusetts and Connecticut.

Which is why Proposition 8 exists.

But even though California voters decided by a large margin to retain the man-woman definition of marriage, passing Proposition 8 will be a challenge.

First, the attorney general of California, Jerry Brown, unilaterally renamed the proposition as it appears on California ballots. It had been listed as "Amends the California Constitution to provide that only marriage between a man and a woman is valid or recognized in California." Brown, a liberal Democrat, changed the proposition's wording to: "Eliminates Right of Same-Sex Couples to Marry. Initiative Constitutional Amendment."

The reason for this change is obvious -- to make the proposition appear as a denial of a basic human and civil right.

Marriage has never been regarded as a universal human or civil right. Loving and living with anyone one wants to live with are basic human rights. But marriage is actually a privilege that society bestows on whom it chooses. And even those who believe that any two unmarried people who want to get married should be given a marriage license should regard as wrong an attorney general changing a ballot proposition's language to favor his own social views. What Brown did was attempt to manipulate people who lean toward preserving the definition of the most important social institution in society -- people who have no desire whatsoever to hurt gays -- to now think of themselves as bigots.

According to Sacramento Bee columnist Margaret A. Bengs, "a recent Field Poll analysis found" that the new wording by Brown "had a 'striking' impact on those newly familiar with the measure, with a 23-point swing against it."

What we have here is truly manipulative. Four justices create a right, and then a sympathetic attorney general renames a proposition so as to protect a 4-month-old right that no one had ever voted to create.

And the left accuses the right of imposing its values on society.

The second hurdle for Proposition 8 is even greater: the multimillion dollar campaign to label proponents of Proposition 8 "haters" and to label the man-woman definition of marriage as "hate." Or as they put it: "Prop 8 = Prop Hate."

It is apparently inconceivable to many of those who wish to change the definition of marriage that a decent person can want to retain the man-woman definition. From newspaper editorials to gay and other activist groups, the theme is universal -- proponents of traditional marriage are haters, the moral equivalents of those who opposed racial equality. As The New York Times editorial on the subject put it, Proposition 8 is "mean-spirited."

But it is the charge of hate (along with bigotry, homophobia and intolerance) that is the primary charge leveled against supporters of Proposition 8. That's why one major anti-Proposition 8 group is "Californians Against Hate."

Any honest outsider would see that virtually all the hate expressed concerning Proposition 8 comes from opponents of the proposition. While there are a few sick individuals who hate gay people, I have neither seen nor heard any hatred of gays expressed by proponents of Proposition 8. Not in my private life, not in my e-mail, not from callers on my radio show.

It is the proponents of same-sex marriage who express nearly all the hate -- because in fact many of them do hate, loudly and continuously. But hate in the name of love has a long pedigree. Why should our generation be different?

These charges of "hate" against proponents of retaining the man-woman definition of marriage do not speak well for those who make them. I, for one, find it easy to believe that most opponents and most proponents of Proposition 8 are decent people. There are millions of decent people who think marriage should be redefined. I think they are wrong, but I do not question their decency.

Why won't those who favor redefining marriage accord the same respect to the millions of us who want gays to be allowed to love whom they want, live with whom they want, be given the rights they deserve along with the dignity they deserve, but who still want marriage to remain man-woman?

Matt Gaetz Wonders If a Transition from Biden to Harris Is Already Underway
Townhall
The Lincoln Project responds to flyers allegedly 'being mailed' that call out the super PAC's leadership
Twitchy
Kayleigh McEnany Reveals Why She Thinks Joe Biden Hasn't Held a Solo Press Conference Yet
Redstate
Portland Can Relax. The 'Enhanced Community Safety Team' Is On The Job
PJ Media