On Shooting Taggers: Why Conservatives and Liberals Differ 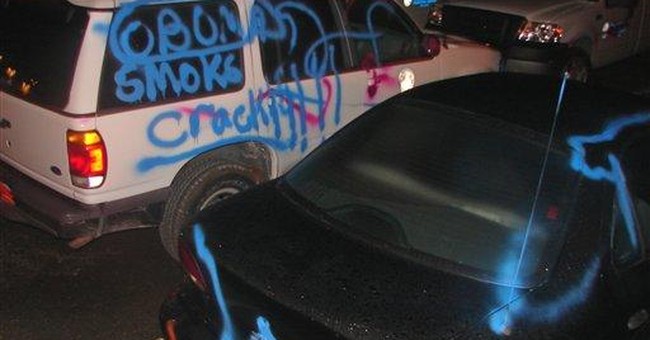 Earlier this month Andrew Sullivan, a well-known writer, once in the center, now on the left, nominated me for what is apparently his lowest badge of distinction for defending citizens who shoot to wound graffiti vandals, or "taggers," while committing their vandalism.

Under the heading, "Malkin Award Nominee," Sullivan provides a quote from my radio show:

"'So you will now say -- I hear the voice of an ACLU member -- 'Dennis, do you think that this guy should have shot these people spray painting graffiti on his shop?' To which my answer is yes. I do. Not to kill. Not to kill. But if he shot them in the legs or in the arms I would have considered the man one of the great advancers of civilization in my time. And that is what divides left from right. Because anybody on the left hearing this would think that this is barbaric whereas I consider not stopping these people in any way that is necessary to be barbaric.' -- Dennis Prager, on his radio show."

Mr. Sullivan provides no commentary because, as I predicted in the excerpt he cites, what I said is so obviously morally offensive to him, no commentary is necessary. It is self-indicting.

To those on the left.

Their differing reactions to graffiti vandals further clarify the philosophical differences between liberals and conservatives.

Reactions to graffiti on the cultural left -- not necessarily the political left, since liberal politicians must respond to public outrage or they are not re-elected -- have generally ranged from support to indifference.

Many on the left have long described graffiti as "urban art" and graffiti vandals as "artists." Even when not admired or even defended, most liberals regard graffiti in far less negative ways than do conservatives. Conservatives tend to regard graffiti as an assault on society, perpetrated by pathologically narcissistic lowlifes bent on undermining the foundations of higher civilization.

To personalize this for a moment, while I assume that graffiti troubles Sullivan, I strongly doubt it troubles him nearly as much as it troubles me. If it did, the odds are he would not be a man of the left.

Why are so many on the left not as angered by graffiti as most conservatives are? I would like to offer some possible reasons:

One is that liberals find it difficult to condemn the poor, especially poor members of ethnic and racial minorities. If rich white kids spray painted their names on university buildings, there would probably be a liberal outcry.

A second reason is that crimes against property tend to disturb the left less than the right, especially when "no one is hurt"; and graffiti is deemed by many liberals as a classic example of no one being hurt. That is why I suspect that most people on the left would express greater anger toward someone who lit up a cigarette in a mall or a restaurant than toward an inner city kid who spray painted his initials on neighborhood walls and signs.

So, it is natural that conservatives would see graffiti as vandalism, as an undermining of the very notion of higher civilization, as a public scorning of the common good, as essentially an "F---- you" to society.

Liberals are far more inclined to see graffiti as a mere nuisance, or even as an example of the downtrodden trying to have a voice in a civilization that oppresses young people who are usually members of historically oppressed minorities.

For those who share Sullivan's political and social values, the notion that someone would defend a man who shot and wounded graffiti vandals defacing his property is worthy of derision. Sullivan is so sure his readers have contempt for such a view that he felt it unnecessary to offer a word of commentary on what I said.

That is unfortunate. I would be interested to know how Sullivan regards taggers and what he would suggest be done to them if caught in the act of defacing property. Since most people suspect that calling the police would achieve little, if anything, what should be done?

My first wish is that taggers be arrested and punished. I also wish for world peace and a cure for cancer. But the real-life choice is almost always between taggers getting away with their vandalism and an irate citizen taking action. Given the destructive nature of tagging -- the moment one sees graffiti, one knows one has entered a largely lawless and violent environment where thugs terrorize innocents -- I prefer something, even if violent, rather than nothing be done.

I have no desire to see a graffiti vandal killed -- my position has always been that only those who cause death deserve death (that is why I oppose the death penalty for any crime except murder). But if enough taggers are wounded, their assault on civilization will decline dramatically. And if one accidentally dies? That would be a tragedy. But here is the bottom line: More innocent people will die if tagging is not stopped than if it is. Graffiti unchecked leads to worse crime.

Those who deface private and public property are not otherwise decent kids who are oppressed and not allowed any other form of self-expression. My sense is that the vast majority of graffiti vandals are headed toward, if not already involved in, a life of sociopathology, including violence.

Indeed, increasingly those graffiti vandals do engage in violence. Citizens who so much as flash their headlights or yell at them to stop have been shot and sometimes murdered.

As in so many other areas, with regard to taggers, right and left see life through opposing moral prisms. On the left, the tagger is viewed as society's victim; on the right, society is viewed as the tagger's victim.