Dennis Avery
|
Posted: Mar 11, 2018 12:01 AM
Share   Tweet
The opinions expressed by columnists are their own and do not necessarily represent the views of Townhall.com. 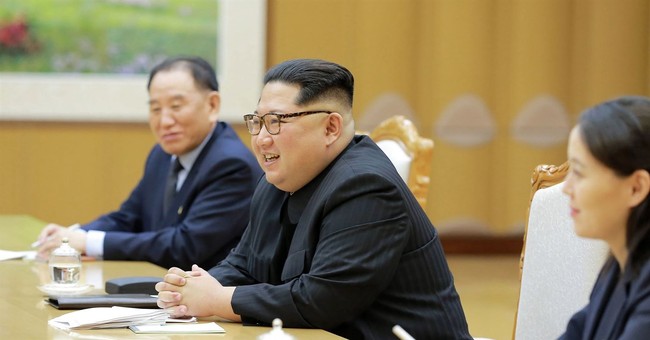 Why has North Korea’s dictator Kim Jong Un suddenly invited President Trump to talks that include Korean denuclearization?! A Korean nuclear breakthrough may have been achieved— a few days after Trump threatened tariffs on Chinese steel exports. Is there a linkage between Chinese steel and North Korea’s nukes?

It's too early to even guess whether U.S.–Korean talks will resolve anything. However, they will bring the United States’ and North Koreas top leaders into direct talks for the first time since the end of Korean War hostilities in 1953.

Before Trump even met with China’s President Xi last November, he had talked about America’s need for Chinese cooperation on the North Korean issue. China has been supplying major percentages of North Korea’s urgently needed supplies of oil, food and other necessities. And China has been employing thousands of North Korean workers in China, with their wages paid directly to Kim Jong Un’s government.

Recent UN sanctions tightened the screws on North Korea with China’s gradually increasing help, but the sanctions had not, so far, seemed decisive.

Trump also talked throughout his campaign about China “taking advantage” of America’s free-trade generosity under the U.S.-led World Trade Agreement framework. There is no question that Western acceptance of Chinese trade expansions re-created a Chinese industrial dominance not seen since China’s Song Dynasty during the Medieval Warming 700 years ago.

It was hoped that trade and prosperity would mean better relations between the giant American and Chinese economies. That hasn’t worked out very well for us - - yet. China’s drive to share world power has led to conventional, nuclear and space arms races. There’s now even a Chinese hypersonic jet fighter that flies more than 7500 miles per hour! More constructively, Chinese financing is stimulating power plants and infrastructure projects in more than 60 countries.

In steel, China has become the dominant world force. It now makes half the world’s steel, producing as much today as the whole world produced in the year 2000. During the same period, the U.S. share of global steel production dropped from 12 percent to 5 percent. Trump correctly warns that we are now flirting with a serious national security problem if we cannot produce adequate steel and aluminum for our defense needs.

America doesn’t import much Chinese steel directly. Most of our imported steel comes from Canada. However, if U.S. tariffs cracked open the current world free trade pattern, China would be directly in the line of fire.

North Korea is clearly a satellite of China, and so has enjoyed the protection of China’s already large nuclear capability. Did the North Koreans really need their own nukes to feel safe? The Chinese until now have cheerfully watched our growing discomfort about North Korean use of nuclear technology for both itself and for the Muslim mullahs in Iran.

Now, however, China may be recognizing that the launch of Kim Jun Un’s nuclear ballistic missiles would set off a major nuclear conflict. Even in the short term, Kim’s aggressive stance could mean nuclear weapons in Taiwan, Japan and South Korea. And Guam.

During the Song dynasty’s 13th-century reign, Chinese exports of brocades, silks, spices and porcelain launched the world’s first-ever economic take-off. China’s long-ago affluence, unfortunately, was cut short by Genghis Khan’s invading Mongol Horde. The Mongols diverted Chinese trade profits into two failed invasions of Japan that were wrecked by typhoons. The nomads even so held China until the harsh weather of the Little Ice Age brought famine and destruction to the whole of Eurasia.

Since 1850, China has been hobbled by foreign occupations (European and then Japanese), by civil war between the Republic of China and the Chinese Communists, and by finally the turmoil of Mao-Zedong’s Great Famine (1959-61) and then his Cultural Revolution.

I was disappointed that Trump hadn’t stressed China’s trade dependence more heavily in his first meetings with Xi. Has President Trump now warned China that its current and future economic well-being—and the survival of Xi’s government—are directly dependent on free trade with well-off customers in other nations?

Maybe now he has. Maybe the threat of steel tariffs was a message Xi can hear— and pass on to North Korea’s power elite.

Dennis Avery formerly served as an economic analyst for the U.S. Department of State.