Dennis Avery
|
Posted: May 07, 2017 12:01 AM
Share   Tweet
The opinions expressed by columnists are their own and do not necessarily represent the views of Townhall.com. 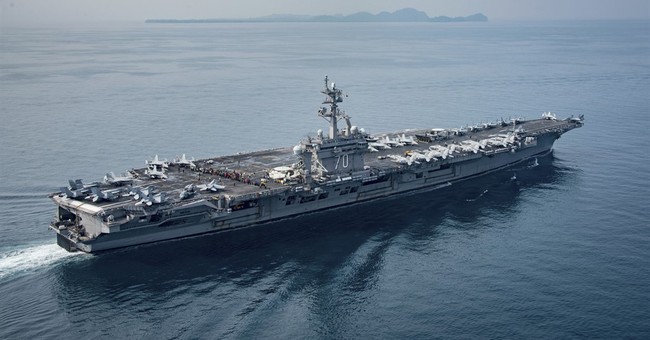 President Obama didn’t just leave his military assets sitting in the garage—he set them to playing useless global warming games. Recently I reviewed the U.S. Navy’s planning documents from 2008–2015. It’s no fault of the Navy’s, but they were directed to accept the IPCC’s overheated claims of parboiled disaster as ultimate truth.

Thus, the Navy planned that many of their naval bases would be put out of action by rapid sea level rise and far stronger storms, just as the calamity criers predicted. They were told to expect an ice-free Arctic swarming with Russia’s subs and undersea miners. New trade though the suddenly ice-free Northwest Passage would require more Coast Guard cutters and more icebreakers. Fuel prices would soar, making biofuels crucial to our military. Meanwhile, the  ships would have to rescue hundreds of thousands of people from sinking islands and failed coastal states like Somalia.

Now that Barack Obama has resigned his commission as Commander in Chief, however, his military’s global warming plans have been overtaken—by new technologies, by unforeseen weather, and by radical political changes.

The Navy’s weather guys must have known back in 2008 about the Pacific Decadal Oscillation, which is the cause of the “pause” (though the alarmists won’t admit the cause is natural--and predictable. The PDO was recognized in 1996 by two fisheries experts exploring the decline of the salmon in the Columbia River. The researchers found that when the salmon declined in the Columbia River, they were abundant in the Gulf of Alaska, and vice versa. The PDO thus massively shifts the currents and sea surface temperatures in the Navy’s biggest “bathtub”— the Pacific— every 30 years.

After the Pacific shifts warm again in another dozen years, we’ll get a solar sunspot minimum that will drop earth’s thermometers well below even today’s non-warming levels. Coupled with the “pause” that would give us a full century of non-warming. Who knew?  But most of us doubted.

Obama’s “Green” Navy declared a “culture of energy efficiency,” including LED light bulbs in the ships, and sailing on one engine while the other propeller’s blades were set to minimize drag.  The Navy said this “draglining” was meant to increase time at the action site between refuelings, but Obama’s demand for a Greener Military was the real decision factor. We might even thank Obama for pushing one actually useful gimmick—installing stern flaps on the vessels to improve water flow efficiency (like those rear spoilers on sports cars).

The Navy’s cleverest Green PR gimmick the Great Green Fleet it sent to sea in 2016. It was a carrier strike force keyed by a nuclear aircraft carrier and surrounded by nuclear submarines and hybrid-electric ships with beef tallow mixed into their marine diesel. Its aircraft flew (briefly) on 100-per-cent-renewable fuel from plant material and algae. Some of the aircraft fuel may have been camelina oil, a very expensive relative of mustard seed now grown in Montana—mainly for cosmetic cream. Some of this camelina oil cost the Navy almost $30 per barrel, against less than $4 for marine diesel. Amazingly, the Naval Petroleum Reserve has no camelina oil. How would we scale up camelina production in the event of a sudden enemy attack?

Today, of course, the U.S. Navy is drawing up an entirely new set of plans—based on cheap and abundant fossil fuels, costly biofuels and the normal storms at sea expected during a global warming like this one. (Storms are vastly worse during the “little ice ages.”) And of course there is still a tiny annual rise in sea levels due to the moderate ice-melt of the Modern Warming. (The massive glaciers of the Ice Age are long gone and the sea has already risen nearly 400 feet since.) The rate of sea level rise has not increased during the last century.

The Coast Guard has not yet orders extra icebreakers to shepherd merchant ships through a sun-warmed Northwest Passage. However, a 70,000-ton cruise liner, the Crystal Serenity, recently sailed successfully from Seward, Alaska, through the Arctic Sea to New York. (It paid for its own privately-owned icebreaker.)

Neither Obama, the UN nor the U.S. Navy ever imagined a whole 21st century with no rise in temperatures, but that now seems the most likely scenario.