No Victory Dance Yet for Trump After House Passes Tax Bill

Debra J. Saunders
|
Posted: Nov 19, 2017 12:01 AM
Share   Tweet
The opinions expressed by columnists are their own and do not necessarily represent the views of Townhall.com. 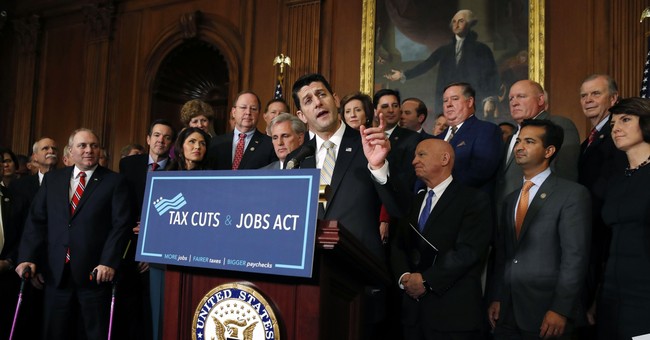 When the GOP House voted to repeal Obamacare in May, President Donald Trump invited supporters to the Rose Garden to celebrate with him and to pat themselves on the back for making history in record time.

Thursday, when Republicans passed the Tax Cuts and Jobs Act there was no talk of orchestrating a public victory lap.

In the fall of his first year in office, Trump has come to understand that passing the halfway mark is no guarantee you'll cross the finish line.

Yes, there are 52 Republicans in the Senate -- as well as a GOP vice president who can break a 50-50 tie vote.

Yet it took only three dissenting Republicans -- Sens. Susan Collins of Maine, Rand Paul of Kentucky and John McCain of Arizona -- to announce their opposition to a Senate bill before Senate Majority Leader Mitch McConnell decided not to bring it to the floor in September.

This go round, Trump is wiser to the ways of the swamp.

"Nobody knew that health care could be so complicated," Trump marveled in February -- to the delight of his entrenched critics. On tax policy, on the other hand, Trump pretty much refrained from oddball assessments. When it comes to matters of the wallet, Trump has a long personal history.

Another difference: Mark Harkins, senior fellow at the Government Affairs Institute at Georgetown University, noted that Trump has refrained from lashing out at reluctant Republicans as he did on health care.

Already Sen. Ron Johnson, R-Wis., has let his dissatisfaction with the current Senate tax bill be known. As Harkins sees it, that means Trump probably cannot afford to lose the votes of the two Senate Republicans whom he has savaged most mercilessly -- McCain and Bob Corker of Tennessee.

"If you're a member of Congress, the last time you went to the White House to celebrate a bill signing, a week later your bill was being pilloried by the president," Harkins recalled. Trump did not help himself on Capitol Hill when shortly after the House passed its Obamacare makeover bill, the president called it "mean." Who wants to go out on a limb with that guy?

The Trump White House worked harder to promote tax reform and did a better job reaching out to like-minded stakeholders. Linda McMahon, administrator of the Small Business Administration, spoke to state and local officials Thursday about how the measure can help small businesses in their jurisdictions. That followed trips she made across the country to listen to what entrepreneurs say they need most.

In a meeting with reporters Tuesday, Office of Management and Budget Director Mick Mulvaney said he thinks the tax bill will pass both the House and Senate because "folks want to get a deal done, and many of the basic principles have been established."

Probably the most useful principle is that Republicans aren't even trying to pay the whole freight for the cuts, and instead are adding $1.5 trillion to the national debt over a decade.

"For those who care about deficits, you should vote no because this bill increases deficits by over $1.5 trillion, likely more," warned Senate Minority Leader Chuck Schumer, D-N.Y. "Any deficit hawk should be against such an increase."

To that, Republicans can respond that Schumer and other Democrats weren't worried about adding to the national debt when it rose from $10.7 trillion in December 2008 to almost $20 trillion at the end of President Barack Obama's tenure. At least the GOP plan is designed to grow the private economy.

As Mulvaney sees it, the only way to "get a truly healthy economy" is to attain 3 percent sustained economic growth - and that requires reforms that encourage investment.

Another factor in the tax reform effort is absence. Harkins isn't sure the House would have passed this bill if not for the president's 12-day Asian tour.

"I think another thing that assisted this time is the fact that he was out of pocket for almost two weeks," said Harkins. That absence made it easier for the leadership to do what needed to be done to keep House Republicans on the team.

As Harkins put it, rather diplomatically, "It seems that it's easier for Congress to move these large, difficult bills when they have less guidance from the executive branch."

One more thing: After failing to repeal and replace Obamacare, Republicans in Congress know that 2018 is right around the corner -- and if voters think they can't get things done, some of them will be political toast.