Debra J. Saunders
|
Posted: Nov 15, 2016 12:01 AM
Share   Tweet
The opinions expressed by columnists are their own and do not necessarily represent the views of Townhall.com. 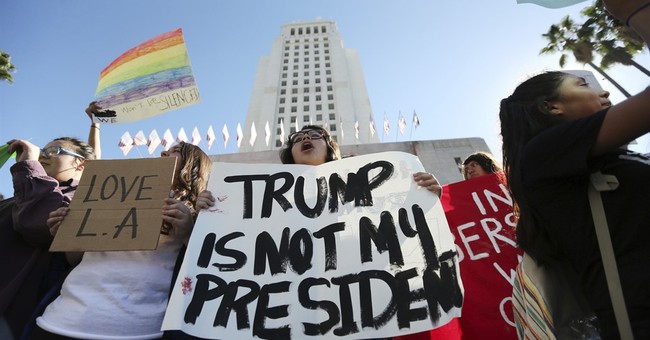 Hillary Clinton voters, I feel your pain. I've been on the losing side more times than I cared to be. It's painful and personal. I would venture to add that Donald J. Trump's victory probably is more bitter than a Clinton win would have been for conservatives because you didn't see it coming. You lost and you were sucker punched. Ouch.

For most of you, the approach voiced by Kevin Eckery, a GOP consultant who did not vote for Trump, should be instructive. "We got head-faked," Eckery told me. The election was never about Trump, it was about his voters. In the future, Eckery plans to "listen with a little more humility."

Over time, one gets used to election loss, the stab of betrayal recedes from sharp to dull pain. You learn to accept it. At least Trump is capable of pleasantly surprising.

Sunday, protesters surrounded Oakland's Lake Merritt to renounce the president-elect. As long as they don't destroy people's businesses and block traffic, they are free to voice their concerns and proudly exercise their First Amendment rights.

Partisans, however, do not have a right to turn classrooms into Democratic caucuses, as suggested in a lesson plan which San Francisco Unified Assistant Superintendent Bill Sanderson sent to schools. It instructed teachers: "Let us please not sidestep the fact that a racist and sexist man has become the president of our country by pandering to a huge racist and sexist base."

It is scary to think that people entrusted with children's education are so clueless that they see it as their job to inculcate students with a cartoonish view of Trump voters. Also, the lesson includes no recognition that the people have spoken. Many Democrats were aghast when Trump said he wasn't sure if he would accept the verdict of the election. Yes, it was poor form, but I knew that if the tables were turned, many Clinton voters would not be real zen about it.

I've had many adults tell me they didn't know how they could tell their children Trump won. May I suggest that some kids would not be so "traumatized" if their parents hadn't whipped them into a lather of indignation about "The Other"?

But also, while the lesson says it wants all students to feel respected, it doesn't give so much as a nod to the notion that some students might like Trump. In San Francisco, Trump won 10 percent of the vote. (That's probably more than the number of transgender students administrators work overtime to make feel welcome. So share the love.)

The California Education Code prohibits school employees from engaging in political activities on the job. "Even if not directly unlawful, a question still arises as to whether or not an employee recommending the substitutionary lesson for the day's assignment is appropriate and allowable," explained Bill Lucia of the school reform advocacy group EdVoice.

All racists, eh? One-third of the 676 counties that elected President Obama twice switched to Trump. Inquiring minds should want to know why. Obama might call this one of his "teachable moments," but that only works for those ready to learn about other people.