Debra J. Saunders
|
Posted: Nov 13, 2016 12:01 AM
Share   Tweet
The opinions expressed by columnists are their own and do not necessarily represent the views of Townhall.com. 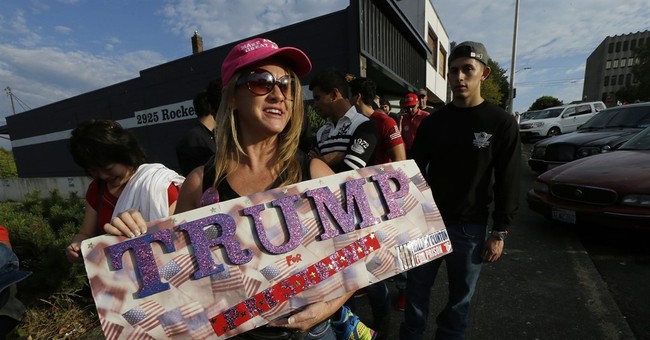 How did the national polls, which overwhelmingly predicted a Hillary Clinton victory, get the presidential election so wrong? A Capitol Weekly election postmortem panel Thursday gave me the opportunity to ask California pollsters unaffiliated with the bad national polls. Mark DiCamillo of the Field Poll saw the Bradley effect with female Trump voters. (The "Bradley effect" was born in 1982 when the late pollster Mervin Field proclaimed that voters would elect Los Angeles Mayor Tom Bradley to be California and America's first black governor. He was wrong, he believed, because voters would not admit to pollsters they supported George Deukmejian lest they appear racist.)

Pollster Rose Kapolczynski, who has worked for Democratic Sen. Barbara Boxer, suggested that the news media and the public look at polls with more "skepticism." Sage advice.

All three pollsters noted that national polls correctly predicted Clinton's win in the popular vote, they just got the states wrong. (Problem: With the Electoral College, getting the states wrong sort of defeats the whole purpose of polling.)

"All the people who get lots of money on this were spectacularly wrong," Henry Olsen, a senior fellow at the Ethics and Public Policy Center, told me the day after the election. That frosts Olsen, because he crunched the numbers in a way that recognized how undecided and third-party voters tend to break toward their political parties. On election morning, he blogged that Clinton probably would prevail, but Donald Trump could confound conventional wisdom with a win.

"The analysts should have made the choice that I made," Olsen said.

Note Olsen did not predict a Trump win -- that would have been career suicide. His mere suggestion that Trump had a chance brought down the hammer of social media derision. By Wednesday, he looked like a prophet.

Two major polls -- the USC Dornsife/Los Angeles Times poll and the Investor's Business Daily/TIPP poll -- put Trump ahead. Critics tried to get the L.A. Times poll kicked off the prestigious RealClearPolitics average of polls because it was an outlier.

Dan Schnur, a former aide to GOP Gov. Pete Wilson, director of USC's Jesse Unruh Institute of Politics and self-described "midwife" of the USC poll, endured his share of abuse. Many reporters, he believed, could not lash out at Trump, so they vented at his poll.

The pressure to conform must have been overwhelming. Schnur answered that his people "are very steadfast. They wouldn't have changed the methodology even if I begged them to."

During the panel, pollster Brown explained the phenomenon of "herding," where pollsters decide to reconfigure their numbers so that they fit other polls. Clearly, there is an institutional bias that pushes pollsters to ignore their own findings and stick to the so-called narrative. Later I asked Brown: Aren't pollsters nervous about pushing their data in the wrong direction. "It's better to be wrong with everyone," he replied.

The L.A. Times poll showed Trump ahead because of its unique methodology -- the poll followed individuals to discern their enthusiasm for a candidate. Clinton voters lacked enthusiasm, while Trump voters were stoked.

What should pollsters learn from 2016? Schnur noted that his poll missed the mark on the popular vote. The key isn't one approach, but for researchers to employ a wider range of methodologies. They also have to be open to new information that contradictions their assumptions.

In the meantime, many voters don't trust pollsters. From the audience, Oceanside attorney Laura Kennedy offered that she would never talk to a pollster. She's a Trump supporter who is sick of Clinton boosters calling Trump voters racists and idiots. "I'm not ashamed of it (her vote)," Kennedy noted. "I just don't want to listen to the backlash."

Pollsters, you have to make people want to answer the damn phone.

The news media don't help when they cover every movement in the polls -- as if polls are infallible -- instead of focusing on issues or listening to voters. Polls indicated a Clinton win. Once she was installed on top, pollsters questioned her lead at their professional peril. 2016 was the year of the polling bubble. Tuesday, the bubble burst.