Let the People Roar: I Think Trump Won the Night

Debra J. Saunders
|
Posted: Sep 28, 2016 12:01 AM
Share   Tweet
The opinions expressed by columnists are their own and do not necessarily represent the views of Townhall.com. 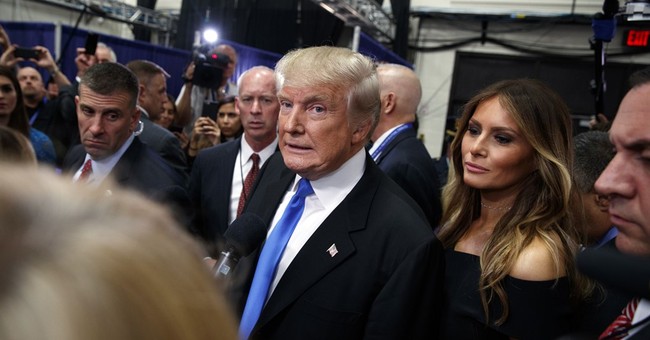 Trending
We all have theories as to how Donald Trump got this far. Mine is that Trump has done well among white high school graduates because he acts the way people think they would act if they were billionaires. If Trump ever doubts himself, he never shows it. He calls people names because he knows he can get away with it. He acts as if having money takes away anguish -- that is, he acts quite differently than most rich people I know.

If he didn't pay federal taxes, Trump told Hillary Clinton after she suggested he has not released his tax returns because he has something to hide, it's not a problem. Why? Because if he had paid whatever she thinks he owed, Trump riposted, Washington would have "squandered" it. Trump clearly believes he would spend the money better -- say on a golf course, or a private plane or a casino.

Trump slammed Clinton on trade, on Iran and the Islamic State. Clinton held her own and fought back by hitting Trump on temperament. She asked -- I think he is vulnerable here -- if Trump is as rich as he claims. Toward the end, Clinton got under Trump's skin by repeating his assessment of various women as "pigs, slobs and dogs." It was a savvy reminder to women that Trump judges them on one thing only -- their looks.

But I believe Trump won because he knew how to tap into taxpayer dissatisfaction, and he did so talking in plain English. Washington funds too many things that voters don't want -- citizenship for undocumented immigrants even if they lie to the government, trade deals that kill American jobs, arms treaties with countries like Iran. When Trump says Washington wastes tax money, you just know that voters in swing states agree.

The Donald closed the debate taunting the lady in the red pantsuit. We're practically even in the polls, Trump taunted, after you've spent a fortune on the campaign trail, and "I've spent practically nothing." Trump's bragging rights are simple: On the cheap and with a thin staff, he is holding his own with the Democratic Party's obscenely well-funded brain trust.

Clinton should have fared better when she took pride in how hard she has worked to win the White House. But if she's even with Trump, what good is her eat-your-vegetables approach?

It isn't right. Trump launched his career in politics with the birther lie and it hasn't hurt him. I've covered this phenomenon before in 1998 when Bill Clinton put America through the tawdry Monica Lewinsky soap opera because he chose to lie under oath. Voters rushed to his defense. I thought voters should turn away from a politician who led them down this path, but a hard-core Democrat told me something at the time I will never forget. "Debra, you cannot stop the will of the people when they have mobilized with this kind of passion." Right and wrong don't matter. The public believed that special prosecutor Ken Starr and GOP critics had gone too far and that was that. They let Clinton get away with his lying and cheating, because they disliked his opponents' excess more than they disliked Bubba's. Trump tells voters what they already think -- Washington does not work for them.

"When the people get to this point," my friend said, "there is nothing you can say" to voters. "All you can do is listen to them roar."