Debra J. Saunders
|
Posted: Sep 04, 2016 12:01 AM
Share   Tweet
The opinions expressed by columnists are their own and do not necessarily represent the views of Townhall.com. 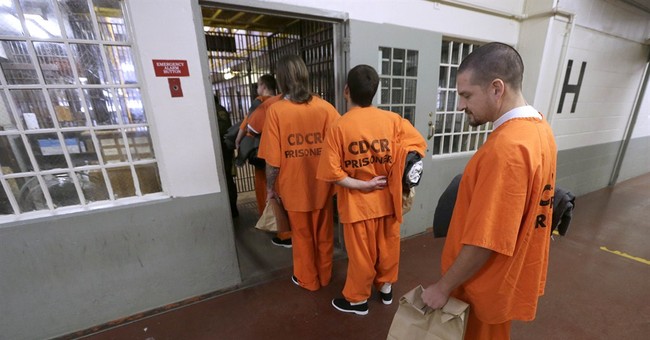 You don't see many Californians when you look at lists of federal inmates whose sentences President Obama has commuted. The reason is simple: The mandatory minimum sentencing system effectively has allowed federal prosecutors to choose defendants' sentences by deciding how to charge them. U.S. attorneys in California have been less heavy-handed than prosecutors in other states.

The feds sometimes can choose whether to charge buyers and sellers for dealing crack cocaine when it's still powder -- crack commands a longer sentence. Prosecutors can charge defendants for quantities that higher ups trafficked. They can include past convictions to lengthen a sentence. Or not. Thus, when a jury convicts a drug offender, the charges have already determined the sentence.

On Tuesday, the Obama administration granted presidential commutations to 111 federal inmates -- including Oakland's Darryl Lamar Reed, a.k.a. "Lil D." So Reed stands out as the rare Californian to win a commutation, as well as an exception to the criteria for Obama's 2014 Clemency Initiative. Then-Deputy U.S. Attorney General James M. Cole explained that inmates applying for a sentence reduction should be "nonviolent, low-level offenders without significant ties to large-scale criminal organizations, gangs or cartels."

Former Alameda County prosecutor Russ Giuntini was appalled to see Reed's name on a commutation list. "This is not a guy that got caught up in the draconian federal sentencing guidelines," Giuntini wrote in an email. Lil D is the kind of guy "the guidelines were made for. He headed the largest dope organization in Oakland," which was responsible for a lot of carnage, was caught "red handed" processing some 20 kilograms of cocaine into crack -- and thus landed in the federal pen.

Reed was only 20 in 1988 when police raided his apartment and found the crack, a handgun and nearly $60,000 in cash. Reed had taken over the extensive drug operation of his uncle, Felix Mitchell, the one-time kingpin who died in federal prison. Reed was no low-level grunt. The San Francisco Chronicle had reported he was "the most powerful crack cocaine gang leader in the East Bay." The feds however didn't convict Reed of a violent crime. I'll assume he did not brandish the handgun, so one can argue he was nonviolent. Nor was he convicted for firearms possession. But low level and with no significant ties to gangs? Hardly. In 2010, Reed told the Contra Costa Times he had made "millions of dollars" dealing drugs.

Reed's not the only high-level offender among the most recent commutees. Four others were convicted of "continuing criminal enterprise." Former prosecutor-turned-defense attorney James Lassart told me, "We only used it with the person who was heading the show." By definition, Lassart confirmed, these inmates are not low-level offenders.

Giuntini, who says he voted for Obama twice, wonders, "Who's doing due diligence for the president?"

The Office of the Pardon Attorney would not talk on the record about Reed. Obama has said that he departed from his initial criteria on guns. If an inmate was convicted for firearms possession, but didn't use a gun during a drug deal, for example, he would qualify as nonviolent. Now it seems the administration is focusing on the first criterion alone -- that an inmate would have "received a substantially lower sentence if convicted of the same offense(s) today." Given changes in federal drug law, Reed likely would not have been sentenced to 35 years if convicted today.

Without this commutation, Reed would be eligible for release in 2019. With it, Reed's release date is Dec. 28 --or two-and-a-half years early. He says he regrets his years peddling dope and has turned away from crime.

The pardon power is the rare power granted in the Constitution that the president can exercise with no check from Congress. Obama can devise whichever criteria he chooses. He is free to depart from his own standards. That's why modern presidents at least start off using the power sparingly. Obama was absolutely stingy. In his first term, he released only one low-level offender serving a draconian federal sentence. In 2013, he stepped up to the plate when he commuted the sentences of eight crack offenders -- six who were serving life terms, including Clarence Aaron a first-time low-level nonviolent offender sentenced to life in prison. He became comfortable reducing the sentences of little guys who never should have been sentenced to decades behind bars, and that was good. Now he's using this power to release some drug-gang big shots. Why? As Giuntini muttered, these things only happen when "people aren't running for re-election."