Debra J. Saunders
|
Posted: Aug 21, 2016 12:01 AM
Share   Tweet
The opinions expressed by columnists are their own and do not necessarily represent the views of Townhall.com. 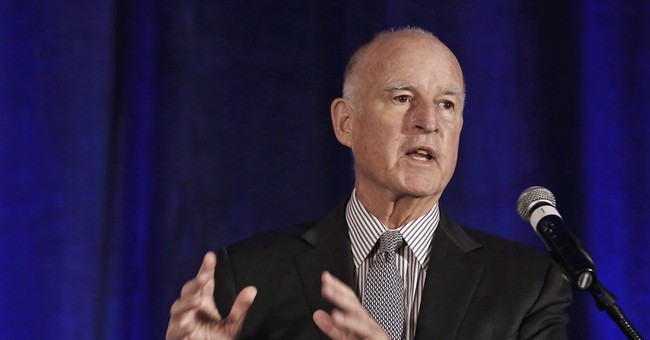 As mayor of Oakland in the 2000s, Jerry Brown supported redevelopment. Then he returned to the governor's office in 2011 and inherited a $25 billion budget shortfall. Feeling the squeeze, Brown saw an opportunity to make $1.7 billion by eliminating redevelopment agencies and shifted. He liked redevelopment as mayor, he explained to the League of California Cities, but also: "I didn't quite understand it. It seemed kind of magical. It was the money that you could spend on stuff that they wouldn't otherwise let you spend."

In Sacramento, fiscal restraint can only last so long. The urge to "spend on stuff" is back. Last year, the Legislature passed a measure with bipartisan support to restore redevelopment. The governor signed the bill, which took effect this year. Already the Legislature is working to expand rules to allow local officials to green-light pet projects more likely to enrich powerful interests than benefit the communities the policy is supposed to serve.

Small businesses, beware. In 2005, the U.S. Supreme Court ruled that "economic development" constituted "public use" in its infamous Kelo decision, which allowed governments to seize private property for private development. (The state or local government derives its power to take private property for public use in return for just compensation from the right of eminent domain.) The Kelo ruling emboldened cities like Oakland to seize private property at bargain prices to accommodate tony private development. The targeted property didn't even have to be blighted -- the traditional rationale for urban renewal projects. It just had to be in the way.

In her blistering dissent of Kelo, Justice Sandra Day O'Connor warned, "The specter of condemnation hangs over all property. Nothing is to prevent the state from replacing any Motel 6 with a Ritz-Carlton, any home with a shopping mall, or any farm with a factory." Oakland proved O'Connor right by seizing two properties -- Revelli Tires and Autohouse -- to make way for private development. "There is a greater good here," Brown told me at the time, even as he admitted the businesses were not blighted.

Ravelli Tires and Autohouse had a form of blight -- their owners didn't have the political clout to fight back. They were like the tire and brake repair shop owned by the parents of Pacific Legal Foundation attorney Larry Salzman. Two decades ago, the City of La Mesa (San Diego County) took his parents' shop to make way for a Costco. "The 'just compensation' offered to them by the city was laughably inadequate," Salzman wrote in the San Diego Union-Tribune, and years of litigation drove them into bankruptcy. That's your "greater good."

AB2492 seeks to expand redevelopment in the worst way. A legislative analysis explains that the bill's purpose is to address "unanswered questions about the data sources" that can be used to determine blight. In effect, AB2492 would allow officials to find that an area is blighted if, for example, the median income there is less than 80 percent of the median income either "statewide, countywide or citywide." Take your pick.

The "or" part, says Marko Mlikotin of the California Alliance to Protect Private Property Rights, would allow local officials to "cherry-pick the data," and let affluent communities parade as needy.

If the bill makes it to the governor's desk as expected, will Brown sign the bill? When redevelopment shuttered in 2011, I liked to think that Brown realized that redevelopment represented a corrupt bargain, even though he never said as much. Now I suspect Mlikotin is right when he posits Brown's move on redevelopment "really was about money, not some new found religion in private property rights."

"Follow the money," Salzman wrote in an email. "There was little money to be made by people who would abuse eminent domain during the economic downturn that followed Kelo and the financial crisis, but in the past few years there is again economic incentive for government and politically favored developers to collude to grab land they can't get in a free market." It's "the worst kind of cronyism."

The older guy who built up his tire shop and the immigrant who started a car repair business don't stand a chance.