Debra J. Saunders
|
Posted: Mar 29, 2016 12:01 AM
Share   Tweet
The opinions expressed by columnists are their own and do not necessarily represent the views of Townhall.com. 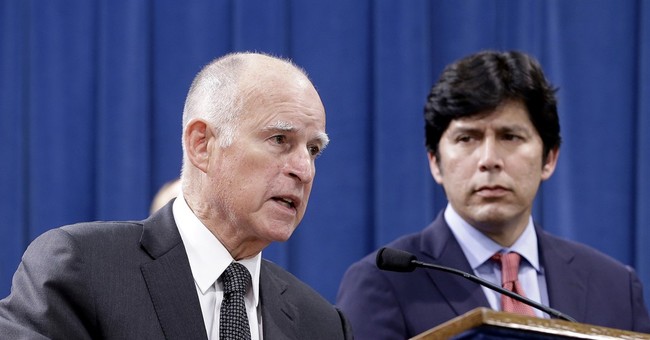 Trending
In their infinite wisdom, Gov. Jerry Brown and the California Legislature have come up with five more reasons for California businesses not to hire new workers. They are introducing a bill to raise the state minimum wage gradually by $5 -- from $10 an hour to $15 an hour by 2022 (and a year later for small businesses). Methinks Sen. Bernie Sanders' call for a $15-per-hour federal minimum wage -- more than double the current $7.25 floor -- has started a bidding war among Democrats who can promise workers increasingly higher wages with other people's money.

Brown, flanked by Democratic politicians and union officials at Monday's news conference, declared, "This is a bold proposal." The deal would make California the "first state" to pass a $15 minimum wage. Democrats are powerless to resist any measure that's a "first" in the nation. Apparently, they lose no sleep wondering whether perhaps there is a reason no other state has done what they are about to do.

Minimum-wage earners have reason to welcome the news; the deal means a 50 percent pay raise over the next six years. What's not to like?

Brown offered freely that "higher wages lead to automation." He knows that the wage law most likely will eliminate jobs, but it will take a few years.

Jon Lieber, chief economist for Thumbtack, a website that connects consumers with contractors, predicts that over time, consumers will find "fewer people behind the counter" when they go shopping. Add the cost of paid leave mandates and health benefits and "it's not surprising companies are more comfortable looking at independent contractors."

Rocco Biale, owner of a California pizzeria, told me he expects to raise prices. Factor in the cost of the employer's contribution to Social Security, workers' compensation and unemployment insurance and a $15-an-hour wage really costs more like $18. Biale wonders how entry-level workers will feel about a $15-an-hour wage when they have to pay more for the same stuff.

State Senate Republican Leader Jean Fuller is on the same page. Her office released her statement: "I am not sure how this new legislation moves the needle in improving California's affordability." Did I mention that no Republicans and no business representatives stood with Brown?

State Sen. Mark Leno, a Democrat, told me the measure makes sense because "if we respect work, we have to reward it."

My fear: In raising the state minimum wage to San Francisco's future minimum pay, Sacramento is stoking a price spiral that will kill jobs, especially in strapped areas, such as the Central Valley.

Leno counters that the six-year ladder gives employers time to plan for the wage increases. And: "A fact of life is that a more strident $15-an-hour ballot measure has already qualified." Now you see why Brown supports this first-for-a-state mandate. If the Legislature passes its own bill, the measure can include protections that would allow a governor to pause it in times of economic woe. A pause could be good, but it can't stop the economic slide of a state led by politicians who keep driving up the cost of hiring workers.