The Brute Force of Government Spending on Autopilot

Debra J. Saunders
|
Posted: Mar 20, 2016 12:01 AM
Share   Tweet
The opinions expressed by columnists are their own and do not necessarily represent the views of Townhall.com. 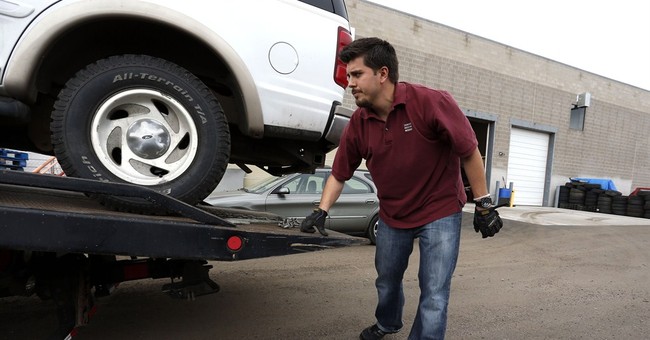 Trending
My car was towed from an area near a train station in San Francisco last month. I had parked in front of a small "No Parking" sign that I had not seen. I spent an hour looking for my car and calling an attendant who didn't answer the phone. When someone finally answered, she told me my car had been towed. It cost me $350.

At least I could afford to pay to get my car back. California is filled with people who are one traffic ticket away from losing their means of independent transportation. They get a ticket for a busted taillight or a small-change moving violation. On paper, the fine is $100, but with surcharges, it adds up to a lot more. People who cannot pay often do not show up in court -- which drives up the cost. According to the Judicial Council of California, about 612,000 Californians have suspended driver's licenses because they didn't pay fines. In 2013, more people -- 510,811 -- had their licenses suspended for not paying fines than the 150,366 who had lost their licenses for drunken driving.

"For a lot of people, the car is the only asset they own in this whole damn world," noted Mike Herald of the Western Center on Law & Poverty. "When you take their car, you're taking the thing that helps them make money."

Herald is an author of a report -- about how traffic courts drive inequality -- that helped prompt Gov. Jerry Brown to institute an 18-month amnesty program to deliver Californians from a "hellhole of desperation." Under the program, Californians can get their outstanding fines reduced by 50 percent -- or 80 percent if they make 125 percent of the federal poverty level or less. The amnesty program does not apply to parking tickets, reckless driving or drunken driving.

This is one of those issues that unite activists on the left and the right. The Western Center on Law & Poverty sees how the system crushes the working poor. Conservatives also see excessive fines and penalties as backdoor tax increases that lawmakers employ because they don't need to sell them to voters. In December, Grover Norquist, president of Americans for Tax Reform, joined U.S. Attorney General Loretta Lynch at the White House for an event that lauded the Brown amnesty program.

"We've turned too many of the police into tax collectors and wonder why they don't have strong relations with the community," Norquist said, according to NBC News. When people can't pay fines in California, it means they have to forfeit their licenses. It's deceptive advertising; a $100 fine can front for an extra $390 in add-ons. The price tag can grow exponentially if unpaid and lead to losing one's license.

The penalty is harsh and crushing on the poor, but these fees also are undeserved for the middle class. If Sacramento wants to levy a $490 fine for moving violations, let lawmakers put honest numbers on their legislation -- instead of pretending that the fine is $100. Alas, the Legislature has found that hidden fees are a handy way to finance the court system without voting to raise tax revenue. It's the easy road.

And though judges might claim that they never asked for this system, they have been able to use the threat of driver's license suspension as leverage to make Californians pony up.

The practice of throwing in extra sources of revenue is so ingrained in Sacramento that there is a $50 amnesty program fee. That's right; if you want to pay off unpaid traffic fines that have ballooned because of hidden fees, first you have to pay another (albeit smaller) hidden fee.

"They're a little tone-deaf," Herald told me. Fellow activists explained that the $50 fee "is a barrier," but to no avail.

If a private corporation advertised a $100 payment for something that really costs $500, California Attorney General Kamala Harris probably would go after the corporation for false advertising. If a credit card company boosted its fees the way the courts do, activists would call the practice usury. If the police yanked people's driver's licenses because they didn't pay a $100 fine, the public would regard such a harsh penalty as excessive force. Yet Sacramento has codified a system that commits all three sins and it's perfectly legal. Really, is there anything more brutal than government on autopilot?