Debra J. Saunders
|
Posted: Feb 28, 2016 12:01 AM
Share   Tweet
The opinions expressed by columnists are their own and do not necessarily represent the views of Townhall.com. 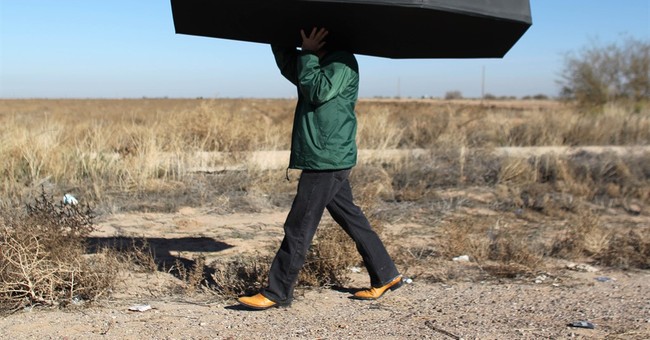 Trending
Ever since Juan Francisco Lopez-Sanchez shot and killed Kate Steinle on a warm July evening as she strolled along Pier 14 with her father, San Francisco's Sanctuary City policy has enraged swaths of the rest of America. Lopez-Sanchez, you see, had been convicted of multiple felonies and deported five times. Immigration and Customs Enforcement would have deported the Mexican national if he had not been handed over to the San Francisco Sheriffs Office on a decades-old marijuana charge.

When the city dropped the moldy case, then-Sheriff Ross Mirkarimi released Lopez-Sanchez without notifying ICE. He said he was being true to a 2013 Sanctuary City ordinance that directed law enforcement not to cooperate with detainer requests except for individuals with a violent felony conviction in the last seven years. Weeks later, Lopez-Sanchez shot Steinle with a gun stolen from a federal agent. Claiming that the shooting was an accident, Lopez-Sanchez has pleaded not guilty.

City Hall refused to kill the 2013 Sanctuary City policy. If conservatives want something, the board of supervisors will block it. Citizen safety be damned.

The Republican Congress is not of like mind. The new chairman of the House Appropriations Subcommittee that oversees the Department of Justice, Rep. John Culberson, R-Texas, is poised to use Congress' power of the purse to withhold federal law enforcement funds from sanctuary cities. He told me, "There will be no more Kate Steinle murders, if I can help it."

U.S. Attorney General Loretta Lynch is on board. Wednesday she told the subcommittee that the Bureau of Prisons will transfer released federal inmates who are undocumented and due for deportation directly to ICE -- not to sanctuary cities, unless the sanctuary agrees only to release the inmate to ICE. Culberson had nothing but praise for Lynch "for doing the right thing."

Center for Immigration Studies Policy Director Jessica Vaughan is less impressed. She sees "a very narrow response to what went wrong in the Steinle case" that doesn't address the real problem: state and local policies of obstruction. "Most criminal aliens are in state and local custody instead of federal prison."

On Tuesday, Lynch's shop sent Rep. Culberson a letter that stipulated that local and state governments have to certify that they comply with "applicable federal laws" to qualify for federal grants such as the State Criminal Alien Assistance Program, which reimburses local governments for some costs of incarcerating undocumented immigrants.

San Francisco stands to lose about $170,000 from the alien assistance program alone. As a believer in the rights of local governments, Culberson told me, he supports San Francisco's right to abstain from ICE enforcement. But if San Francisco chooses to release "illegal aliens" and turn them loose on the streets, "don't even ask for SCAAP funding."

The Department of Justice letter was news to City Hall. "We have no information that would suggest any of our federal funding is at risk and Mayor Lee stands firmly behind our Sanctuary City laws," Lee's spokeswoman Christine Falvey told me in an email. Those two sentence clauses contradict each other: If City Hall doesn't cooperate with ICE except in cases with recent violent felons, then the city stands to lose federal funds.

"I can't speak for the city," Eileen Hirst, chief of staff to the new sheriff, Vicki Hennessy, told me. She can only speak for the Sheriff's Office. And: "If, in fact, the city loses this money, it will be up to the people who make the budget -- the mayor and the board of supervisors -- to decide if and how the money will be replaced."

Sanctuary cities across the country will have to make similar choices. But when you think about it, if elected officials don't mind risking the safety of their citizens, surely they won't mind the loss of federal money.

That's not to say San Francisco pols don't believe in rules. When undocumented immigrant Pedro Figueroa-Zarceno, 31, announced that San Francisco police had referred him to ICE after he reported his car stolen, the force launched an investigation -- on the police, not Figueroa-Zarceno, who was facing a 2005 deportation order and was convicted of drunken driving in 2012. "It's absurd that the city is investigating the cop who did the right thing," quoth Vaughan, "instead of the illegal alien, who's here in defiance of the law."