No Justice. No Football.

Debra J. Saunders
|
Posted: Feb 02, 2016 12:01 AM
Share   Tweet
The opinions expressed by columnists are their own and do not necessarily represent the views of Townhall.com. 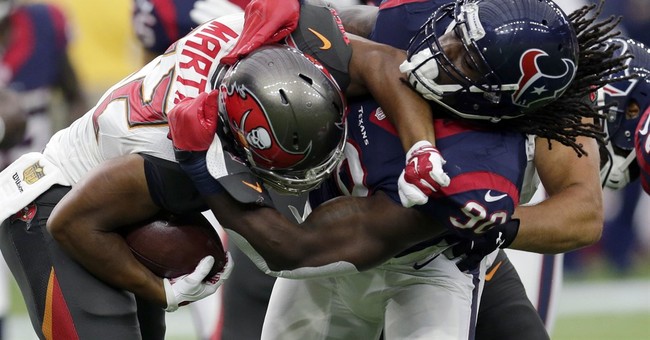 Trending
For me, the big question isn't which team wins in that football thing this weekend. The real big question is whether local anarchists and malcontents will try to shut down any big-name bridges, freeways or otherwise jam up the Bay Area's Super Bowl festivities.

Social media and news organizations report chatter of a big protest a-brewing. San Francisco Chronicle staff writer Kevin Fagan -- master of the protest beat -- told me, "Chances are very good that a major disruption will be attempted at least."

In Iowa, if you build it, they will come. In the Bay Area, if you build it, they will come to block it. Think of the "Black Queer Liberation Collective Black.Seed," who blocked the Bay Bridge on Martin Luther King Jr. Day last month. Or Black Lives Matter protesters, who shut down BART for hours on Black Friday 2014. Or Occupy Oakland, who did just that in 2011. For some reason (if reason is the word), left-wing activists do their worst in blue states.

Of course, there will be lawful demonstrationsm, such as Saturday's peaceful "Justice for Mario Woods" protest in Union Square, where activists aired their grievances about the Dec. 2 police shooting. Woods was a young black ex-felon with a knife whom five police officers shot to death. Unlike activists, I prefer to wait to see the conclusion of a federal probe into the shooting before concluding that Police Chief Greg Suhr should be fired or that the cops involved in the shooting should be prosecuted. (After all, a federal investigation essentially found that a Ferguson, Missouri, police officer shot Michael Brown in self-defense. I think that Black Lives Matter and facts matter, too.) Still, I respect the right of peaceful protesters to bring attention to Woods' death and use Super Bowl buzz to express their disapproval of law enforcement's hair-trigger response.

The shut-down groups are a different animal. They have nothing better to do than ruin other people's day. When Black.Seed blocked all five westbound lanes, they shut down the Bay Bridge for half an hour and jammed traffic for hours afterward. Police arrested and released 25 activists. Will they suffer any legal consequences?

If history is any lesson, probably not. The "Black Friday 14," who chained themselves to each other and to railcars disrupted BART; theirs was an illegal demonstration. But after a year Alameda County District Attorney Nancy O'Malley dropped misdemeanor charges for obstructing a railway. In exchange, activists acknowledged they had broken the law and inconvenienced others.

Undeterred by reality, Black.Seed equates police with terrorism. Don't these social-justice mavens realize that in police states, dissidents risk a long stay in prison cells, robbed of due process, just for voicing their opinion? Bay Area activists break the law in broad daylight, and they risk, what, a lecture? Then they pat themselves on the back for their "courageous display of solidarity."

Their demands read like a parody of demands. Black.Seed demanded Oakland divest police funding and that Mayor Libby Schaaf resign. (Mayoral elections -- they're for suckers.) The Black Friday 14 likewise demanded that the BART police force be dissolved. (Do these swells ever ride BART?)

Activists say they want to promote awareness -- and they have. They've made everyone else acutely aware of how truly clueless they are.