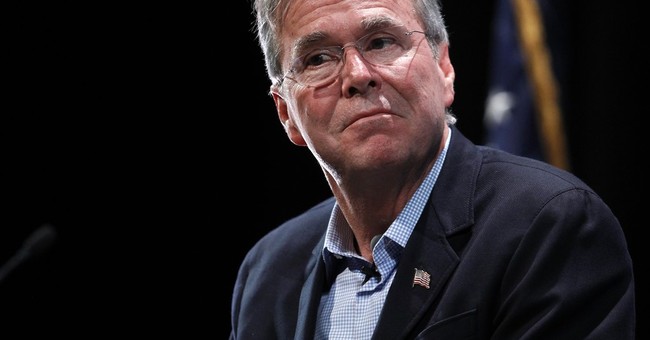 I am starting to feel really sorry for Jeb Bush -- almost as sorry as Jeb! (his campaign nom de plume) apparently feels for himself. He's the son and the brother of former presidents, yet last week's RealClearPolitics polling average put Bush in fifth place for the Republican nomination for president, behind billionaire Donald Trump, retired neurosurgeon Ben Carson, Sen. Marco Rubio of Florida (his former protege) and Sen. Ted Cruz, R-Texas, of government-shutdown fame. It's a sad place for the fundraising front-runner.

To show how serious he is about winning, Bush cut his campaign staff payroll by 40 percent across the board last week. During an interview at Regent University, Bush explained: "I have not met a person that thought Donald Trump would be the front-running candidate at this point. God bless him for his success in that regard. We'll see how long that lasts. But you have to adapt." Going forward, quoth Jeb!, the campaign will be "lean and mean."

Lean? Well, Bush did lose some pounds on The Paleo Diet. But mean? I don't see it. Bush just sent celestial best wishes to the reality-TV star who wants to win the Republican nomination even if it means handing the White House over to Democrat Hillary Clinton. GOP voters want a fighter, and Jeb! is giving benedictions to The Donald.

Sacramento GOP strategist Rob Stutzman tells me, "Jeb is a safe harbor for a lot of voters who don't believe Hillary Clinton is what we need in the White House." Stutzman isn't on the Bush payroll, but he said he supports Bush because he still thinks Bush is "built for the long haul for the nomination and certainly for the general election."

I look at Trump, who is a destructive blowhard, and Carson, a nice courtly man with no political experience, and I just want GOP voters to pick a candidate who can win next November. Rubio and Ohio Gov. John Kasich probably are the two Republicans who keep Clinton's campaign team awake at night. And maybe, I've thought, Bush has the grounding to weather all the storms ahead.

But then the "long haul" candidate showed a short fuse in South Carolina on Saturday when he let rip his discontent: "I don't want to be elected president to sit around and see gridlock just become so dominant that people literally are in decline in their lives. That is not my motivation. I got a lot of really cool things that I could do other than sit around being miserable, listening to people demonize me and me feeling compelled to demonize them. That is a joke. Elect Trump if you want that."

Until that outburst, I thought Bush might have the makings of a good GOP nominee. Now I think someone on his 40-percent-off staff should tell him that he talks like a Democrat. To the GOP, gridlock is not a dirty word; it does not lead to "decline" in people's lives. It stops the government from getting too big.

If Bush wanted to say that he has better things to do than scheme for Congress to pass veto-bait bills, then he should have said as much. He did not.

Stutzman reminds me of the Bush family problems with syntax. It's almost genetic. But here Bush looks bad when you understand what he said. If Bush thinks that calling out Trump for being an unreliable loudmouth is demonization, then he has no business on the campaign trail. So if he wants to do something really cool, then maybe he should endorse a viable candidate who will go all in. Or he could become that man.