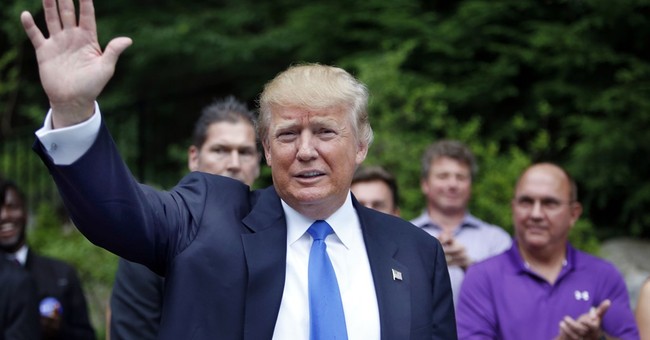 Donald Trump is the GOP's Voldemort, the Dark Lord and villain of the Harry Potter children's book series. To thinking Republicans who don't want to go through another circle of hell like the 2012 presidential primary, Trump is He Who Must Not Be Named. When a partisan mistakenly utters his name, media dementors -- soulless creatures who sail through the airwaves -- pop out from nowhere and suck the oxygen out of the hapless offender. Helpless and filled with dread, some victims die, while others slip into nothingness. The dementors will not relent. They want to turn the primary into a pain-inducing referendum on the Dark Lord.

Mexicans are Trump's muggles -- that's author J.K. Rowling's word for humans with no knack for magic. Trump, 69, rants about Mexicans and undocumented immigrants all the time. When he announced June 16 he was running for president, he called them criminals, drug dealers and rapists.

Just as Voldemort thought he could get some intrepid students at Hogwarts School of Witchcraft and Wizardry to follow him even after he schemed against them, Trump believes he can win over the Latino vote, or so he told NBC.

Voldemort was a birther. He used a slur -- mudbloods -- for wizards and witches born to muggles. Likewise, in 2011, Trump demanded that President Obama produce his birth certificate. Quoth the Donald: "Obama may have one, but there is something on that birth certificate -- maybe religion, maybe it says he's a Muslim, I don't know." Trump's speculation came out of thin air, yet almost as quickly as the "accio" summoning spell, Trump's challenge prompted the White House to produce said document.

Minister of Tragic Reince Priebus has tried to keep peace in the Republican land, but Trump knows how to hex party harmony. Priebus called Trump to ask him to tone down his language about Mexicans and immigrants. Trump flourished his wand and turned the party chief's verbal cuffing into "more of a congratulatory call." Priebus lacks the wandwidth to blast Trump with the Expulso Curse.

In his bid to attain immortality, Trump channeled morsels of his damaged soul into random vessels, called horcruxes. Their names are (ex-wife) Ivana, (ex-wife) Marla, (future ex-wife) Melania and his reality show, "The Apprentice." They share an incantation: "You're fired." As added protection, Trump keeps his fifth horcrux close to him. It is his hair, which glides snakelike alongside Trump wherever the reality TV star slithers.

Like Voldemort, Trump has stumbled in his lifetime. When Voldemort tried to kill a baby Harry Potter, it was Voldemort who had to go -- into hiding, anyway. Trump filed for corporate bankruptcy four times -- in 1991, 1992, 2004 and 2009, but never for personal bankruptcy. Like Voldemort's minions, Trump's investors paid for his sins. Now Trump says he is worth $9 billion.

Since Trump declared his candidacy, his critics have been waging a serious assault on Trump's assets and reputation. The loudmouth rants have cost the billionaire beaucoup bucks. NBC announced it was ending its business relationship with "The Apprentice" star. "Celebrity Apprentice" will continue -- without Trump. The Miss Universe and Miss USA pageants won't be on NBC. Macy's and the PGA followed suit. Like Voldemort down to his last horcrux, Trump is losing his amulets.

There will be a gathering on Aug. 4 as Fox News hosts the first GOP debate of the 2016 campaign. According to the debate rules, the top 10 candidates in the five most recent national polls will face off. Friday's RealClearPolitics average showed Trump in seventh place behind former Florida Gov. Jeb Bush, neurosurgeon Ben Carson, Sen. Marco Rubio of Florida, former Arkansas Gov. Mike Huckabee and Sen. Rand Paul of Kentucky.

Think Hogwarts students and professors facing off against Voldemort and his Death Eaters. Except it isn't really a contest. Donald Trump is no match for the rest of the field.

Cable news has worked to make this primary a battle between a boorish billionaire and candidates who have won elections and want to talk about their ideas. Yet all reporters ask is: What about Trump?

This primary doesn't have to be all about The Donald: There is a way to end the spell. Bush said it Thursday when a reporter asked him twice about Trump: "I'm done."