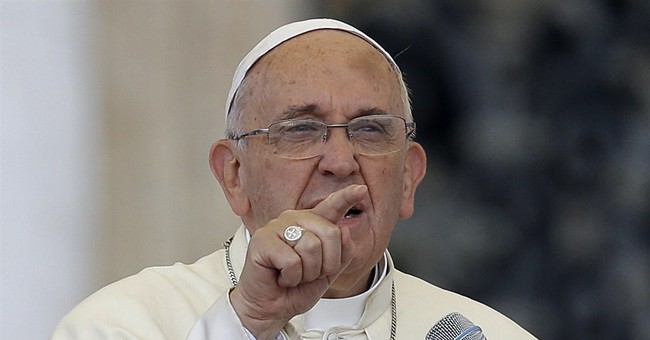 Trending
Pope Francis is releasing an encyclical Thursday on climate change -- a draft of which was leaked to the Italian magazine l'Espresso on Monday. The New York Times reports that the encyclical is "eagerly awaited, especially by scientists and environmentalists" -- because the pope agrees with most of them. On the right, it's not all love.

No surprise, I would say. Climate change alarmism always has had a lot in common with organized religion. What's the message of hard-core environmentalists? The end is near. Repent.

Both amen corners have their views on sin. Here they are aligned. The pope's draft denounces sins against the planet. According to a translation by The Guardian, the encyclical says the Earth "is protesting for the wrong that we are doing to her, because of the irresponsible use and abuse of the goods that God has placed on her. We have grown up thinking that we were her owners and dominators, authorized to loot her. The violence that exists in the human heart, wounded by sin, is also manifest in the symptoms of illness that we see in the Earth, the water, the air and in living things."

Before he became vice president, environmentalist Al Gore wrote likewise. In his book "Earth in the Balance," Gore warned of a "dysfunctional civilization" ruined by an unsatisfiable hunger that pushes people to over-consume resources -- trees, water, minerals -- until they are "addicted to the consumption of the earth itself."

To true believers, the most important thing is not whether people stop contributing to greenhouse gases but that they  believe they should. Note enviros' crusade against scientists who deviate from climate change orthodoxy -- also known as "deniers."

The environmental movement has a lot in common with the Vatican. If you say that you believe in climate change, your work is done. If you doubt, you could be excommunicated.

The New York Times finds it odd that Catholic Republicans are willing to depart from church doctrine -- even though many Catholic Republicans have parted with Rome on the death penalty. To me, it is incongruous that people who say they simply follow "the science" are now trumpeting ties with religion.

Yet it makes sense because in this version of the encyclical, the Vatican has swerved to the far left. When the church calls for a "true world political authority," as Slate reported, to govern global economies and warns that capitalism threatens to "destroy creation," then Rome should get ready to lose the right side of Washington. The encyclical reads like politics, not religion. And there is, after all, such a thing as separation of church and state.